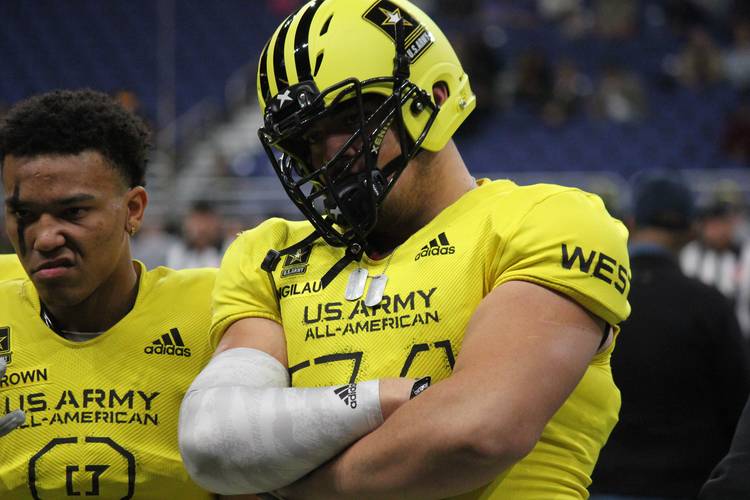 SALT LAKE CITY, Utah — The hills behind East High School transformed Texas offensive lineman Junior Angilau from a boy to a young man. Becoming a four-star prospect with offers from around the country was a struggle for the Utah native. No one thought he was a football player, not even his mom.

Junior Angilau’s story is unique. Most players at football factories in Texas were destined for the bright lights and throngs of cheering fans. Not Angilau. He arrived at East High his freshman year as a band nerd more noted for his lung capacity playing the baritone than for his blocking capability.

“Junior was gangly as a freshman and I remember his mom telling me ‘He’s not really a football player, but he wants to play,’ so he did, and he was abused and picked on a lot,” East High head coach Brandon Matich recalled. “He got beat up. I didn’t know if he was going to make it as a freshman and sophomore.”

Advertisement
Heck, Angilau wasn’t even the athletic sibling growing up. He spent more time cheering on his sister’s travel softball team than honing his own football skills.

“Athletics just wasn’t his cup of tea,” said his mother, Leslie. “He was an easy-going kid into video games. His sister was the athlete and we traveled a lot going to her games. He enjoyed supporting her.”

That all changed when Angilau wound up on the wrong end of a double team. His teammates do what kids do: They teased him. But a fire was lit. Anger-fueled sprints up the hills surrounding campus followed, as did Angilau’s success on the field.

“Junior isn’t a guy who complains. He internalizes those things, but the next day at practice, he was a dude,” Matich said. “It was one of those Disney stories. He started dominating people. He went from a gangly underclassman to a dedicated football player with potential. It mattered to him, and he’s never looked back.”

Junior is now a 6-6, 300-pound guard at Texas with a chance to start as a redshirt freshman. He was a key part of Texas’ 2018 recruiting class, which ranked third in the nation. The former four-star prospect was a national top-125 ranked player and the 10th-best guard in his cycle.

Matich saw the potential as soon as Angilau decided to become aggressive. It’s not just his size and strength that stands out.

“Guys his size aren’t supposed to move that well,” Matich said. “Once he figured out that he could make an impact, he’s put everything he has into becoming great. I’m incredibly proud to watch the journey and it isn’t over. He’s a Sunday type player.”

In the end, Angilau picked Texas over Utah. You can see the Utes’ home stadium from the East High fields. Angilau is an admitted mama’s boy, and leaving his family wasn’t an easy decision. It took a herculean effort from the Longhorns, and specifically assistant coach Derek Warehime, who was coaching the offensive line in 2018. He’s now in charge of coaching tight ends.

“Derrick Warehime was genuine and was constantly a presence when he was allowed to visit,” Matich said. “He made Junior feel like a major priority, and Junior felt that love. He was going to Utah, but Texas made him feel loved in a different way. They came here to get Junior Angilau.

“They didn’t go see any other Utah prospects. Tom Herman knew who he wanted and made him a major priority and that was a huge deal to Junior.”

It was a major selling point to his mother. She wanted her boy looked after, and not just on the football field.

“Texas was all about family,” she said. “Texas met his teachers and built relationships with everybody who was important to Junior. Tom Herman and Derek Warehime drove out to my work. Texas was there as much as was allowed, and I felt completely comfortable with what Texas wanted for Junior.”

The concern for family and coaches when Angilau chose Texas was distance. Matich worried that he would wind up back in Utah after his freshman season. It’s a hard adjustment for any teenager to move that far from home. But the concerns never materialized.

“Junior has taken to the Texas program and never looked back,” his mother said. “He’s a big teddy bear and he loves it in Austin. I’m excited to see what comes from the next few years.”

Breaking down the defense: A position-by-position look at Texas’ roster, depth