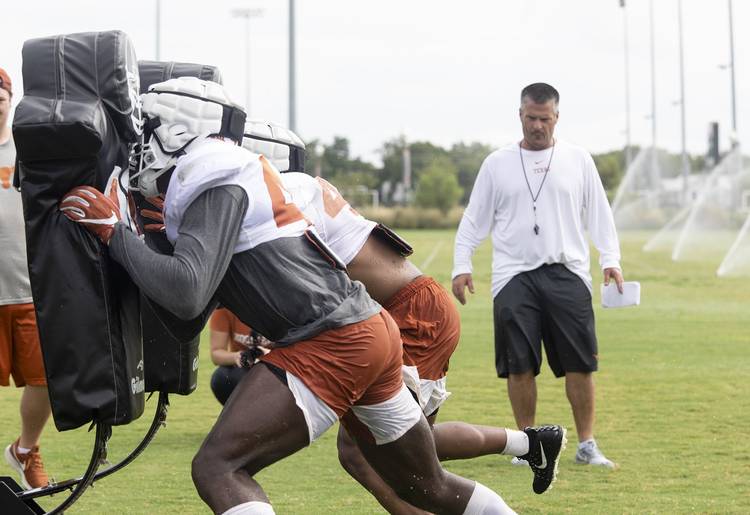 In 2015 and 2016, the Longhorns allowed at least 30 points per game. Those units were two of the worst statistical defenses in school history, right up there with the woebegone unit from 1997.

In college football, 30 points per game is a rather significant barometer of success. Rise above it, and your team is probably competitive every Saturday. Fall below it, and you’re likely a goner.

In Orlando’s first season at Texas in 2017, the defense allowed 21.2 points per game, the third-best average in the Big 12. Then last season, opponents scored 25.9 points, a total inflated by several fourth quarter defensive collapses.

Orlando, who believes this a “run-and-hit business,” is legitimately excited over the unit’s overall speed this season. This could be the most athletic unit he has fielded in his three seasons at UT.

Now, does that all translate to on-field success? Here are this season’s keys for the defense:

Holding the point of attack

There’s been an incredible amount of talk this August about the secondary being the defense’s strength, and that’s true. But this scheme doesn’t hold up unless someone is anchoring the middle or getting pressure off the ends.

Poona Ford and Chris Nelson did yeoman’s work in the middle at defensive tackle the last two years. Now, redshirt freshman Keondre Coburn, one of the state’s top-ranked recruits from 2018, steps into the spotlight. The 340-pounder must jam things up the middle so linebackers can roam free.

Keep up the blitz pressure

There is no single elite pass rusher on this defense, at least not yet. Malcolm Roach enters his senior season with five career sacks in 34 games. Ta’Quon Graham has just 1.5 sacks in 26 games.

That’s not to say those two ends won’t blossom in 2019. Charles Omenihu came into his senior season with seven career sacks in 34 games. He had 9.5 sacks last season and wound up becoming the Big 12 defensive lineman of the year.

Orlando’s specialty is defensive pressure, blitzing guys from “the parking lot,” as coach Tom Herman said this preseason. Linebackers Jeffrey McCulloch and Joseph Ossai must help with pressure. Watch for B.J. Foster to blitz from the nickel spot. Getting to the quarterback in this league is critical.

“We’ve got some people who can rush the quarterback, and whether or not they can put it all together in a game situation, we’ll see,” Orlando said.

Losing two senior starting cornerbacks would be a challenge for any defense. Kris Boyd and Davante Davis played a lot of football at Texas. There will be growing pains for younger players like D’Shawn Jamison, Jalen Green, Anthony Cook and Josh Thompson. The key has always been to let bad plays go and focus on the next one.

This is where experienced safeties Brandon Jones and Caden Sterns must show leadership. Jones has started 23 out of 34 games and made 147 tackles. Sterns had 62 tackles last season playing in 13 games.

There is little doubt UT’s young corners have athleticism. It’s all about confidence. After the first scrimmage, Herman said they could have fought harder for 50-50 balls. Receivers will want to challenge them, and it’s all about whether the corners will stand up for themselves.

Get off the field on third down

The Longhorns had significant troubles last season on third down. Opponents converted 44.3 percent of their third-down attempts against Texas, which ranked seventh. Third-down conversions made the difference in losses against Oklahoma State and West Virginia.

There is no magic formula, no offseason study, no surprise scheme that can help a defense on third down. It’s merely a mindset. However, it’s clear that Herman and Orlando are going all out thinking about creative lineups.

During preseason practice, Herman said one third-down package had Roach at nose guard, McCulloch and Ossai coming off the edge and eight defensive backs. “You want to talk about looking like Star Wars for some of these quarterbacks,” Herman joked.

Linebackers must set the tone, pace

The defense will rise or fall based on Orlando’s unit, the linebackers. McCulloch, Ossai and Ayodele Adeoye are the key cogs in the machine. Just look at last season when Gary Johnson and Anthony Wheeler finished 1-2 in tackles.

Coaches were banking on DeGabriel Floyd providing an instant impact as a freshman. But he’s been medically ruled out for the season with spinal stenosis.

Junior transfers Caleb Johnson and Juwan Mitchell both should be in the rotation. Herman also raved about Marcus Tillman Jr., a freshman from Orlando, Fla.

The linebacker unit skews younger, but these are the people Orlando is talking about when he mentions speed and athleticism.