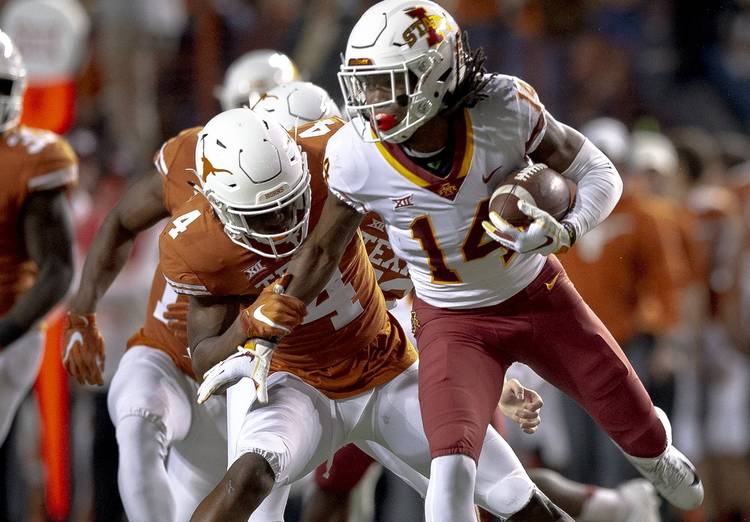 Trying to solidify the pecking order at cornerback isn’t easy.

“Nobody has given us any signs that they can’t play at this level,” Texas defensive coordinator Todd Orlando said.

So how does the coaching staff narrow it down? Orlando just starts lining up players across from 6-6 receiver Collin Johnson.

“If they can go against Collin and be successful,” Orlando said, “then we feel they can play with anybody in the country.”

Last year’s seniors, Kris Boyd and Davante Davis, would openly accept that challenge. But their departure has opened the door to a slew of young, confident defenders, all of whom believe they are ready for the Big 12 circus.

So who’s getting the upper hand? Depends on who you ask.

“I think (sophomore) Jalen Green is a guy that has a chance to be extremely elite,” Sam Ehlinger said. “It’s hard to put guys in that elite level because of who they’re going against with Collin. But Jalen has done a great job of holding his own, honestly. It hasn’t been complete dominance at all.”

Ehlinger has also been impressed with sophomore D’Shawn Jamison because of his footwork. “There’s a bunch of other guys I could keep naming off with names,” Ehlinger said. “I think we’re gonna have good depth at that position.”

Texas coach Tom Herman is already on record in his belief that Green may play only three years at UT. The Houston product with long arms and tremendous athleticism is that talented. He played in 11 games last season, mostly on special teams, and had two tackles in the Sugar Bowl.

What about some established names, like Anthony Cook and Kobe Boyce?

Cook, a sophomore from Houston, played in all 14 games last season and started against Oklahoma State. Boyce, a sophomore from Lake Dallas, started twice. His most active game came in the opener against Maryland after Davis got hurt. Boyce had 10 tackles and a pass breakup and played on special teams.

This group has obvious athleticism, but no clear-cut starters. If Texas played in the SEC or Big Ten, it wouldn’t be that big an issue given the run-oriented nature of those leagues. Not the Big 12, where four teams finished in the top 16 nationally in scoring per game last year.

Orlando has hinted that Texas could mix and match its cornerbacks lineup. The Horns can afford to experiment with veterans Brandon Jones and Caden Sterns at safety.

The coaching staff has tried a third-down package with eight defensive backs, a creative look that puts a massive amount of speed on the field. Orlando said the Horns would not give up size, though. So it’s something that opponents may only see in small doses.

“It’s pretty confusing, honestly,” Ehlinger said. “You got guys who are traditionally DBs playing the post who are on the ends. You’ve got speed all over the place, so you can’t exploit any matchups. All our guys can run 4.4 or 4.3s (in the 40-yard dash). You’re not going to beat anybody with speed. So it really eliminates some stuff in the passing game.”

Orlando ranks every defensive player on the roster and builds out a strategy to utilize his top 11. Where these young corners rank individually will determine who gets on the field first against Louisiana Tech.

Breaking down the defense: A position-by-position look at Texas’ roster, depth