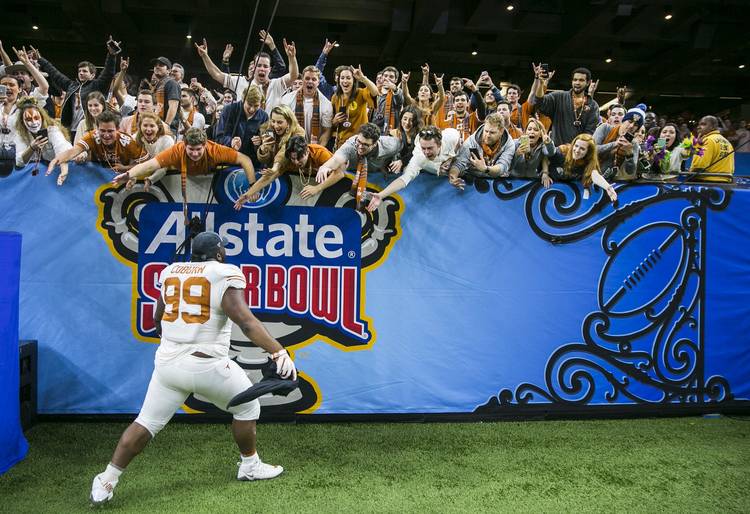 Texas defensive lineman Keondre Coburn (99) celebrates a 28-21 win over Georgia in the Sugar Bowl in New Orleans on Jan. 1, 2019. [RICARDO B. BRAZZIELL/AMERICAN-STATESMAN]

Sam Ehlinger wasn’t the only Longhorn who made a big statement on Jan. 1 in New Orleans.

Yes, thanks to the Texas quarterback’s on-podium declaration following the Longhorns’ win over Georgia in the Sugar Bowl, a lot of college football fans now know that Texas is baaack. That 28-21 win over Georgia, though, also gave other Longhorns the chance to announce that they’re heeere.

The Sugar Bowl served as a coming out party for a handful of Longhorns. Joseph Ossai, then a freshman linebacker, led the team in tackles. Freshman defensive back B.J. Foster performed admirably while filling in at safety.

There were others. Here are some of that bowl game’s emerging contributors to keep an eye on this fall:

As a true freshman, he played in all 14 games and got his first start in the regular-season finale. He made the most of his two starts, recording five stops at Kansas and then a team-high eight tackles against Georgia.

Texas needed two new starting linebackers this season with the departures of Gary Johnson and Anthony Wheeler. Ossai will be one of them.

Does he view his Sugar Bowl performance as a jumping-off point? He thinks so — but for the team.

“It certainly gave me a lot of confidence, but I have a lot more confidence in the team,” Ossai said. “I wouldn’t be able to do it without them, especially the D-line.”

Foster started six times last season and was a regular when it came to playing time. Four of those starts, though, came when Texas wanted a sixth defensive back on the field for its first defensive snap.

In the Sugar Bowl, though, Texas started him in place of injured starter Caden Sterns.

Two of Foster’s three tackles against Georgia were for losses. He also forced a fumble that was recovered by Georgia, and he broke up a third-quarter pass.

Foster, a five-star recruit coming out of high school, is vying for playing time as a nickel back.

Coburn registered just one stop against the Bulldogs, but his Sugar Bowl appearance shouldn’t be overlooked. He redshirted last season, but a new NCAA rule allows a player to appear in as many as four games but still retain a redshirt season.

Coburn played in three games, including the Sugar Bowl. The 6-2, 340-pound lineman is in line for a lot more playing time this season. He’s expected to start the season opener at nose tackle against Louisiana Tech.

Because of late targeting penalties against fellow cornerbacks Davante Davis and Anthony Cook, Green was one of the two corners on the field during the final defensive drive of Texas’ season. Green had two tackles on the year. One of them came on Georgia’s final drive of the game.

He played in 11 games as a freshman, but didn’t earn a start. That could change soon since last year’s starting cornerbacks, Davis and Kris Boyd, have moved on. Green (6-1, 185) has already impressed Ehlinger, who described him as “a guy that has a chance to be extremely elite.”

The Dotted Line: How have Texas’ offensive starters lived up to their recruiting rankings?