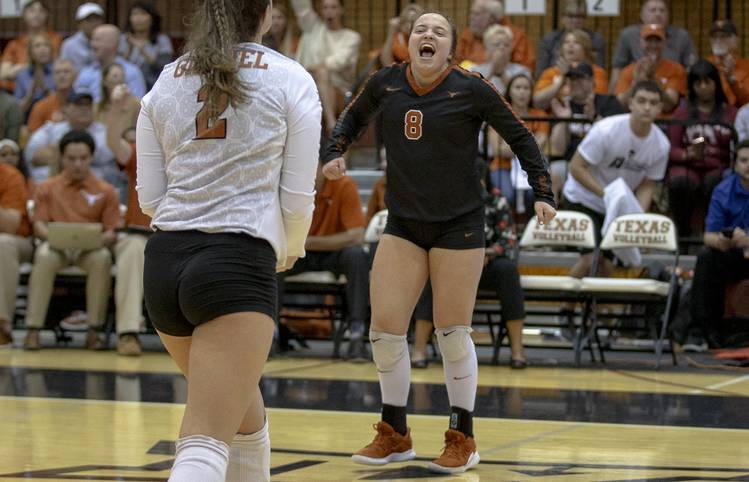 Texas libero Sydney Petersen (8) celebrates a point during a match against Stephen F. Austin in Austin on Nov. 29, 2018. [NICK WAGNER/AMERICAN-STATESMAN]

More than a dozen family members will be on hand when Texas plays Northern Iowa in the season opener for both schools. Petersen’s father, uncle and grandparents will be there. Her younger sisters are visiting Austin for the first time. Texas’ sophomore libero even has an enthusiastic cousin who’s been sending videos throughout the month of her packing.

One thing, though. At least two members of Petersen’s family have no interest in seeing the fourth-ranked Longhorns go 1-0.

Petersen’s mother, Bobbi, has been Northern Iowa’s head coach since 2001. And Petersen’s twin sister, Baylee, is an outside hitter for the Panthers.

“I’m really excited, but I’m also kind of nervous because I don’t know how it’s going to be,” Petersen said. “I’ve never played against my sister, she’s always been on my team. I’ve never (played) against my mom. I don’t know, we’ll see how it goes.”

Who’s ready for the #PetersenBowl on Friday?! . . When we play @univolleyball on Friday, @sydney_petersen8 will play her mom, Head Coach Bobbi Petersen, and twin sister, Baylee!

For the Petersens, volleyball is a family business.

Bobbi Petersen starred at Northern Iowa in the late 1980s, when she was a three-time all-conference  player. Michelle Bolte, who is Bobbi’s sister and UNI’s director of volleyball operations, also played volleyball at the school. Sydney and Baylee Petersen won three Iowa state titles at Dike-New Hartford, which is the same high school that Bobbi led to a state championship as a senior in 1985.

Petersen grew up around Northern Iowa’s volleyball program, and former Panthers like all-time digs leader Ellie Blankenship were considered role models. Still, she had other interests in high school like basketball and track. She insists that her mother didn’t push her toward volleyball. She admits, though, that it may have been awkward had she chosen another sport.

“I don’t think I would be disowned, but (volleyball) is what we do in my house,” Petersen said.

Sydney and Baylee, who both wear their mother’s old number and have matching tattoos of that No. 8 on their wrists, each appeared in the NCAA tournament during their first years of college. Sydney won the libero job at UT, averaging 3.58 digs per set. Meanwhile, Baylee appeared in 31 matches for Northern Iowa’s Missouri Valley Conference championship team.

Last year marked the first season that the Petersen twins weren’t on the same team. But their paths weren’t meant to remain separated. Texas coach Jerritt Elliott had publicly floated the idea of scheduling Northern Iowa, and he was the one who brought the idea to Bobbi Petersen. The schools eventually agreed to a home-and-home series that will send Texas to Cedar Falls next year.

Scheduling Northern Iowa puts a team with a solid RPI on UT’s non-conference schedule. The Panthers, on the other hand, get to test themselves against one of the nation’s top team. Their non-conference slate also includes No. 7 Kentucky, No. 14 USC, No. 16 Marquette and No. 18 Creighton.

“That’s what we try to do in the preseason, is play as many top teams as we can to have our team see where we want to be and go in there and compete,” Bobbi Petersen said. “It’s just a really good opportunity for us in a lot of different ways.”

Petersen applauded Elliott’s efforts in giving her the chance to see Sydney play. Two seasons ago, Texas appeared in a tournament in San Diego with two Southern California products on its roster (Lexi Sun and Yaazie Bedart-Ghani). A 2016 trip to Colorado State gave then-senior captain Nicole Dalton a chance to play near her home. The Longhorns scrimmaged this past spring in Honolulu, the hometown of sophomore setter Jhenna Gabriel.

“I think one of the things that I love about college coaching is you get to give back to the game and you get to create experiences and memories for the athletes that you have,” Elliott said. “When you’re able to go see families and to be able to play in front of your family in Hawaii and show your team the culture like we did with Jhenna, (that) was priceless for her. She still talks about that.”

The pre-match smack talk among the Petersens has been kept to a minimum. When she was practicing in the backyard this summer, Sydney was reminded by her mother that “I know all your weaknesses.” Baylee also has a copy of her sister’s scouting report, although she concedes that “it kind of goes both ways.”

“There’s definitely advantages because I know how she plays and how she thinks,” Baylee Petersen said. “But the disadvantage of that is she knows how I play and all that.”

Surmised a smiling Sydney: “I know that’s the game plan, probably, just to attack me. Whatever. It’s fine.”

This weekend won’t be completely adversarial. Petersen is looking forward to showing her sisters where she lives and introducing her family to Torchy’s Tacos. Northern Iowa will play two matches in San Marcos on Saturday, but Bobbi Petersen will get to cheer from the stands when UT hosts USC on Sunday.

For a couple of hours on Friday, however, all bets are off. The scavenger hunts and three-legged races at your typical family reunion? This portends to be a bit more cutthroat.

Whys of Texas: Aside from Sam Ehlinger, who’s the most important Longhorn?