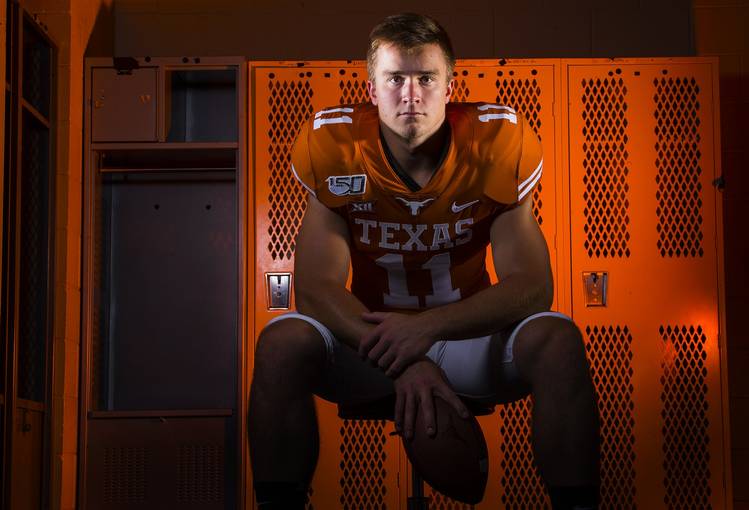 The last time American-Statesman photographer Ricardo Brazziell was asked to shoot a Texas quarterback for our annual college preview section, Royal-Memorial Stadium was under construction then, too.

Colt McCoy, one month before his junior season, donned a construction hard hat and held a football-rigged sledgehammer on Aug. 6, 2008. It must have been a good omen; the Longhorns went 12-1 that season and beat Ohio State in the Fiesta Bowl.

Brazziell was back inside the stadium on June 14, this time in the visitors’ locker room, with camera in hand to shoot Sam Ehlinger, who’s entering his junior season, too.

Fans usually only see the final product, of course. Ehlinger’s photo was the lead image on the Statesman’s 2019 college football preview, which landed on readers’ doorsteps Thursday. It was published online a week ago.

The Longhorns quarterback was just as confident with Brazziell as he is staring down an opposing defense.

Brazziell, a Chicago native who has been at the Statesman for 17 years, got to the stadium early. Good thing he did, too. The Statesman was one of five media outlets waiting to shoot Ehlinger wearing his full home uniform that day.

Brazziell set up his equipment in the visiting coaches’ locker room, a small space off the main floor with old lockers and an open bathroom. A few power outlets didn’t work, and some of the lockers had seen better days. But all in all, the space was perfect for the desired look.

“I wanted to try to do some creative lighting for it, but I didn’t know what space I was going to be in,” Brazziell said. “After I saw the space, I was like, ‘OK, I can work with this.”

Brazziell borrowed a ladder and climbed up and removed some fluorescent lighting. He set up five different portable lights — one main light, two centered on Ehlinger, a background light and a fifth light with an orange glow.

Brazziell used two Canon cameras, one with a 24-70mm lens and another with a 50mm fixed lens. About the only hiccup came when the camera with the 50mm lens stopped working. Ehlinger probably couldn’t even tell as Brazziell kept shooting with his other camera.

The whole photo shoot lasted about 20 minutes. Brazziell, 43, grew up with a love of music. He got a music scholarship to Grambling State and played the tuba for one of the nation’s most famous collegiate bands. “I wanted the biggest, baddest instrument on the field,” he said. Once Brazziell looked through the camera lens, he was hooked.

To set the mode, Brazziell flipped on Pandora and played music through his iPhone speaker to get both him and his subject grooving.

“From there, everything else was gravy,” Brazziell said of Ehlinger. “I had a few poses in my mind already set in stone. He was so relaxed and willing to do almost anything.”

These are the images he shot:

“He was really, really easy to work with as far as shooting,” Brazziell said. “I couldn’t pick a better or easier subject to work with that day based on the amount of lights I had to set up and the time that I had.”

Here’s a recap of some of our college preview content:

Caden Sterns has set the bar high for himself