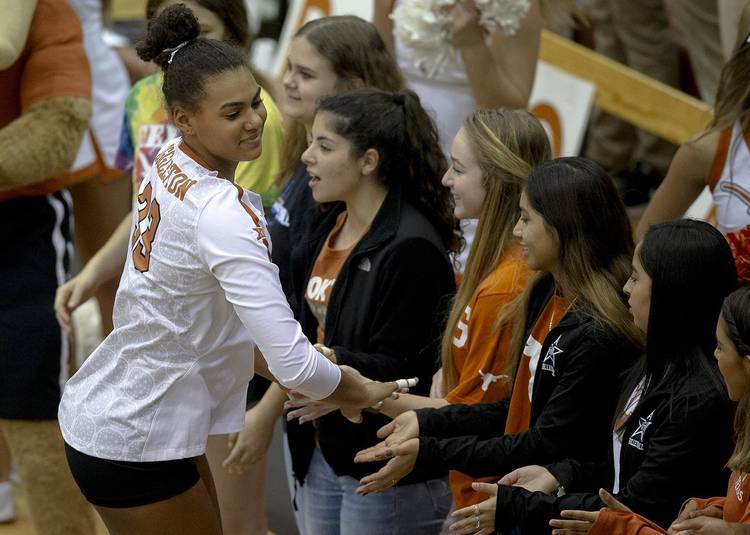 Texas outside hitter Logan Eggleston (33) high-fives fans before a match against Kansas State in Austin on Nov. 7, 2018. [NICK WAGNER/AMERICAN-STATESMAN]

Ranked fourth in the AVCA’s preseason poll, Texas will open its volleyball season with two unique matchups this weekend.

The Longhorns welcome Northern Iowa to town on Friday night. USC is Sunday’s guest at Gregory Gym. The fight on Friday will pit sophomore libero Sydney Petersen against her mother (UNI head coach Bobbi Petersen) and her twin sister (UNI outside hitter Baylee Petersen). Longtime Texas coach Jerritt Elliott is also hosting a reunion of sorts this weekend since he went 50-12 as USC’s interim leader in 1999 and 2000.

Texas will play 12 home matches this season. The Longhorns must also clear 11 hurdles on the road. Additionally, a neutral-site meeting with No. 9 BYU is on the agenda.

“Obviously (our goal) is to win a national championship,” Petersen said. “I think we’re just going to take it one step at a time. Just take care of preseason, take care of conference play and just one game at a time.”

If a 24-match schedule seems light, it’s because it is. Of the 25 schools in the preseason poll, Texas and No. 20 Baylor are the only teams that aren’t playing at least 28 times this season. (Baylor has 26 matches). None of the ranked teams have scheduled fewer than UT’s eight non-conference matches.

Elliott said the Longhorns could have played as many as 28 matches. In order to get to that number, however, Texas likely would have needed to play multiple matches in a single day. And with only a 13-player roster, Elliott is wary of mental and physical fatigue.

“To my knowledge we have not been penalized in the RPI because we played fewer matches,” Elliott said. “I think our schedule will hold true to being strong enough to be a top-four RPI team if we’re able to take care of the victories.

If UT’s coach had his way, the Longhorns would actually open this season in Big 12 play. On Monday, Elliott proposed that the first match for the Big 12 defending champions should be against last year’s last-place team. The runner-up should get the next-worst team and so on and so forth. After a few weeks of those matchups, the warmed-up teams could then venture into non-conference play.

But alas, Texas won’t see another team from its conference until Sept. 25. And since the Big 12 sent only two teams to the NCAA tournament in 2018, the toughest tests of the season may come in the first few weeks.

Northern Iowa reached the NCAA tournament last year, as did a Rice team that will greet Texas on Sept. 18. USC is ranked 14th. Next week, the Longhorns host No. 3 Minnesota before traveling to battle a top-ranked Stanford team that has won two of the last three national titles. One year after beating Texas in a regional final, BYU will reunite with the Longhorns in Wichita State’s gym in mid-September.

“I think if you look back at my track record in terms of scheduling, it’s always been tough,” Elliott said. “There’s a lot of value to being able to play these teams early on in the season. … You get exploited a little bit and along the way, you’re trying to get W’s doing that.”

Setter Ashley Shook is the only junior on the roster, so the Longhorns will be guided this fall by a blend of youth and experience. Petersen and fellow sophomores Logan Eggleston, Brionne Butler and Jhenna Gabriel were key members of last year’s rotation. Freshman hitter Skylar Fields and redshirt freshman middle blocker Asjia O’Neal could both start. Elliott has said that newcomer Molly Phillips is going to contribute as a middle blocker.

As for UT’s five seniors, none will have a bigger on-court impact than outside hitter Micaya White. Texas boasts three four-time All-Americans in its history, but White could become the fourth. She needs only 83 kills to bump Janine Gremmel (1,306 kills) out of the top 10 on UT’s all-time chart.

“I think one of my major goals is just to not have any regrets,” White said earlier this month.

Staying on schedule: With Louisiana Tech, Texas is going back to formula that led to winning ways