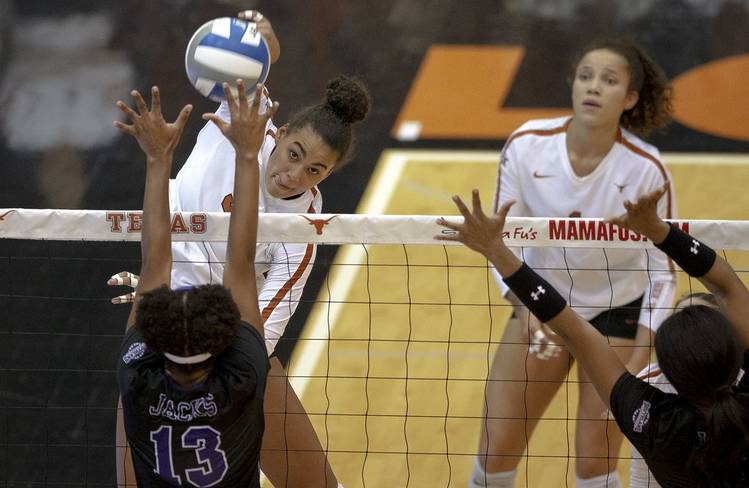 Texas outside hitter Logan Eggleston (33) spikes the ball as teammate Micaya White watches during a match against Stephen F. Austin in Austin on Nov. 29, 2018. [NICK WAGNER/AMERICAN-STATESMAN]

In front of an announced crowd of 3,715 on Friday night, Texas bested both its opening-night jitters and a feisty foe from Northern Iowa.

Texas entered the 2019 season as the fourth-ranked team in the AVCA’s preseason poll.

“The jitters were a little bit of a factor in the beginning,” Texas sophomore outside hitter Logan Eggleston said. “Once we go back, look at film and see the little things that we could have done better, that’s going to really help us (get ready) for USC on Sunday.”

After the match, Texas coach Jerritt Elliott said he was disappointed in the way his team played. One of the bones picked by the longtime coach was the way that UT received serves at the beginning of the match. In the opening set, UNI used three straight aces by Kate Busswitz to put Texas on an upset alert.

The Panthers led by three points at four separate points of the opening set. The Longhorns, though, rallied to a six-point win behind a handful of timely kills by Eggleston and Skylar Fields.

Northern Iowa went onto secure the second set and then appeared poised to take control of the match. UNI went up 21-20 in the third set before that lead crumbled under the weight of a service error and a ball-handling miscue. Late kills from White and Asjia O’Neal then guided UT to a two-point win and a 2-1 overall lead.

The two teams were locked in 10 ties during the last set, but Texas finally broke free from a 16-16 knot. After 6-4 freshman Molly Phillips gave UT a sliver of a lead, White contributed two kills. Equipped with a 19-16 advantage, Texas scored six of the final nine points.

“I think our communication really picked up in that last set,” Eggleston said. “We just kind of said we’re the better team, we just need to come out and prove it.”

Sophomore middle blocker Brionne Butler sat out UT’s opener with what Elliott called a lower extremity injury. With last season’s leading blocker sidelined, Texas turned to a starting line-up that featured White, two sophomores and three freshmen. Petersen, who does not get credited with starts but opened the match on the floor, is also a sophomore.

Eggleston and Fields each contributed 15 kills while O’Neal provided a team-high four blocks. Eggleston is an 18-year-old sophomore who skipped her senior year of high school last season. Both O’Neal and Fields, who hit .577, made their UT debuts on Friday. A middle blocker, Phillips tallied six kills and a .500 hitting percentage.

“The offensive things are going to come together, I thought (the freshmen) did some nice things,” Elliott said. “For the first game and trying to be able to get that, they’ve got to get comfortable as a team. That’s part of this.”

A unique subplot of the season opener was a showdown between Petersen and two members of her family. Bobbi Petersen has been UNI’s head coach since 2001. Baylee Petersen, who is Sydney’s twin, is an outside hitter for the Panthers.

On the match’s first play, Sydney received a serve from her sister. Sydney finished the match with 15 digs. Baylee had nine digs and an ace.

“It was just a good time, I loved playing against my mom and my sister,” Petersen said. “It was kind of weird at first, but it just turned into a normal game.”

Notes: According to Elliott, Butler is day-to-day with her injury. … UNI (0-1) was led by Karlie Taylor’s 19 kills and 19 digs. … Sophomore setter Jhenna Gabriel, who was pulled for a short stretch in the second set, had 37 assists.