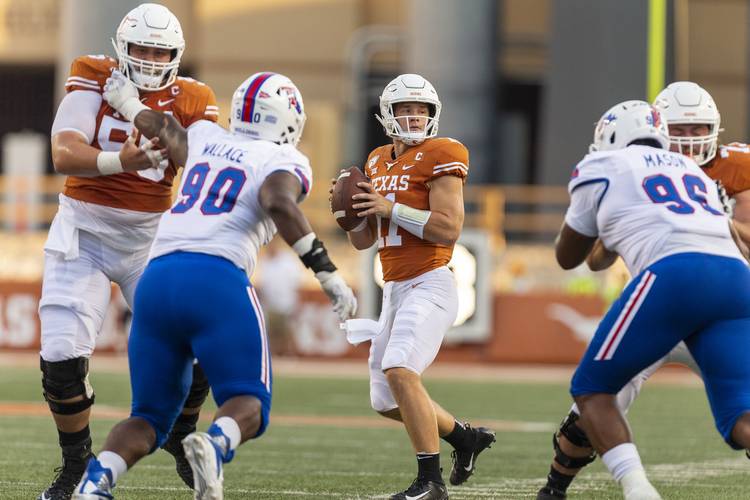 Revisiting our five pregame questions that were facing the Longhorns ahead of Saturday night’s season-opening win over Louisiana Tech.

1. Who was Texas’ leading rusher?

Ingram, who was injured in the first preseason scrimmage and subsequently held out for the rest of training camp, averaged 7.1 yards per carry. He finished with 78 yards and a touchdown on 11 carries to lead Texas. Jordan Whittington aggravated his groin and ended up being a non-factor. Freshman quarterback Roschon Johnson, who’s been working out as the third-string running back because of injuries, had seven carries for 26 yards.

2. What did Jake Smith do in his debut?

The freshman had four catches for 31 yards. His longest grab was for 18 yards. Sam Ehlinger took a shot at him in the end zone in the third quarter, but they couldn’t connect.

3. How did Johnson, Roach and Jones do?

Three Longhorns — wide receiver Collin Johnson, defensive end Malcolm Roach and safety Brandon Jones — decided to come back rather than jump into the 2019 NFL draft. They had mixed results in the opener. Johnson caught his 13th career touchdown and had four grabs for 59 yards, but committed Texas’ first turnover of the season when he lost a fumble in the first quarter. Roach had two tackles, including one for loss. And Jones was third on the team with seven tackles and recovered a fumble, but he also committed a costly penalty when his roughing the passer call negated an 82-yard Joseph Ossai interception return for a touchdown.

4. Did Texas avoid another slow start on special teams?

Cameron Dicker missed a 49-yard field goal attempt, but was good from 43 yards out before that. It was his 19th career field goal. Ryan Bujcevski averaged 41.0 yards on three punts and Devin Duvernay opened the game with a 36-yard kickoff return.

That was all a big improvement over what’s transpired in the last two season openers; the Longhorns didn’t have a field goal in either, missed one from 42 yards out in 2017 and also gave up a blocked field goal that was returned by Maryland for a touchdown.

5. Did Texas beat both the Bulldogs … and the spread?

Sure, Louisiana Tech is a Group of Five team, but the Bulldogs are no cupcakes; they hung with LSU last year and have won at least eight games in four of the last five years. And the 10th-ranked Longhorns were 20.5-point favorites, so they easily covered the spread.