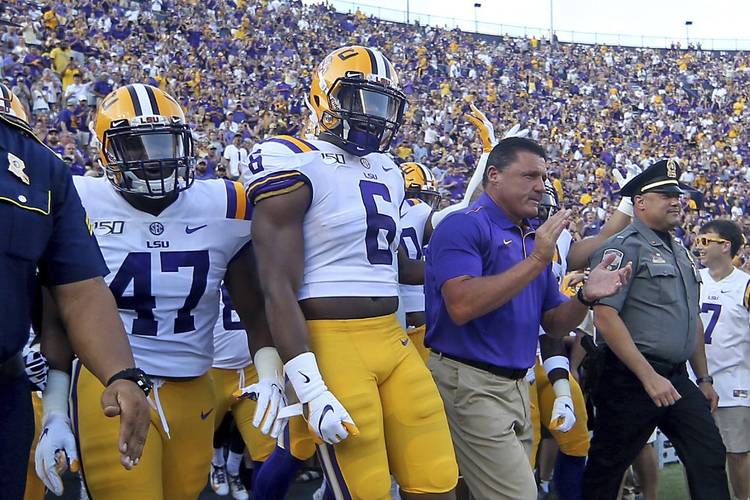 Texas has no reason to fear No. 6 LSU. None.

Since coach Tom Herman arrived, the Longhorns are 2-0 against SEC teams, and both times, they were the supposed underdogs. Texas throttled Missouri in the 2017 Texas Bowl and, of course, thumped Georgia in last year’s Sugar Bowl.

One sportsbook already has LSU listed as a four-point favorite. Herman loves people betting against him. At Texas, he’s 8-2-1 against the spread when the underdog. At this point, that status might not fit, though.

The Tigers have gone to a spread offense this season under coach Ed Orgeron. “The scheme is a lot better this year,” Orgeron told reporters after a 55-3 win over Georgia Southern. “We have answers to different coverages. We’re putting our guys in position to have success.”

The Longhorns see that every week in the Big 12. The past two years, UT faced Oklahoma teams led by the future No. 1 pick in the NFL draft. The Horns lost by five to Baker Mayfield and split two games against Kyler Murray.

Saturday’s Top 10 showdown against LSU is without question the biggest game at Royal-Memorial Stadium since No. 1 Ohio State came to town in 2006. It’s far bigger even than any SEC blowhard would have you believe.

“A lot of hard work went into that, putting us into position,” UT receiver Collin Johnson said after Saturday’s 45-14 win over Louisiana Tech. “Coach Herman says it’s a big game because we made it a big game.”

If the Longhorns treated this week’s game as any bigger than another, Herman would be crushed. He’s spent every waking moment the past two-plus years preaching a 1-0 mentality. Everything matters to him. Even the sign on the front door of the football facility reads, “Everything Matters.”

“I don’t know how to put it, but it wouldn’t be fair to us if we worked harder for LSU than we worked for La Tech,” linebacker Joseph Ossai said. “We need to keep carrying that week two, week three, week four, doesn’t matter who we play. Same effort going into it. Same amount of energy at practice. Hopefully, same result out there.”

In previous years, Texas players have used political correctness with reporters. They would say things the coaches or school officials would want them to say. But these days, it feels different. These players absolutely believe it. Herman’s preachings about “alignment” have fully taken root.

“The media is hyping this game up,” defensive end Malcolm Roach said. “It’s two good schools playing against each other, but at the end of the day, we’re still playing football the same way we always played when we were younger.”

Said running back Keaontay Ingram: “My opinion, I feel like we’re headed in the right direction. Playing as a team, team chemistry, no selfishness, doing our job and going 1-0 everywhere. I feel like that takes you a long way to do something special.”

Would losing to LSU be a colossal setback? Of course not. But a win dramatically changes the national narrative. Suddenly, Texas would probably become a top-five program again and an instant College Football Playoff contender.

That’s why ESPN’s “College GameDay” is coming to Austin this week. The program made regular appearances during the Mack Brown regime and still likes to pop into Dallas for the Texas-Oklahoma game. But this will be ESPN’s first trip to Austin since 2009.

“Anytime ‘GameDay’ comes to town, it’s a big boost for the community, big boost for the program. I think it’s fantastic,” athletic director Chris Del Conte said. “Plus it gets to highlight everything we’re doing.”

There will be a spotlight on UT’s health in the backfield this week, to be sure. Ingram said he felt fine afterward. His teammates not so much. Jordan Whittington’s night was cut short due to his ongoing groin issue. “He’ll be day to day,” Herman said. “He was cleared to go back in. We didn’t feel like we needed him.”

Roschon Johnson developed a stomach bug Friday night but was still able to play. The Horns will still be without running backs Daniel Young (ankle) and Kirk Johnson (shoulder). They are expected to miss at least half of September.

Herman said Collin Johnson felt “a twinge in his hamstring” in the third quarter and was held out late as a precaution.

Overall, the Texas offense should feel good about its season debut against Louisiana Tech. Quarterback Sam Ehlinger threw four touchdown passes and went 15-for-18 passing on the game’s first four drives. He hit eight different targets as the Horns ran up an early 21-0 lead.

Defensively, safety Caden Sterns had a solid showing in his return to action with eight tackles, tying his previous career high. Ossai and DeMarvion Overshown both had interceptions; Overshown also had a sack rushing out of the “Cowboy” look with eight defensive backs.

Ossai, Roach and safety Chris Brown all earned postgame praise in the locker room from defensive coordinator Todd Orlando. Jalen Green had two of the team’s six pass breakups, including one near the goal line.

You’ll get stopped at the box office this week, too. Any tickets left for LSU?