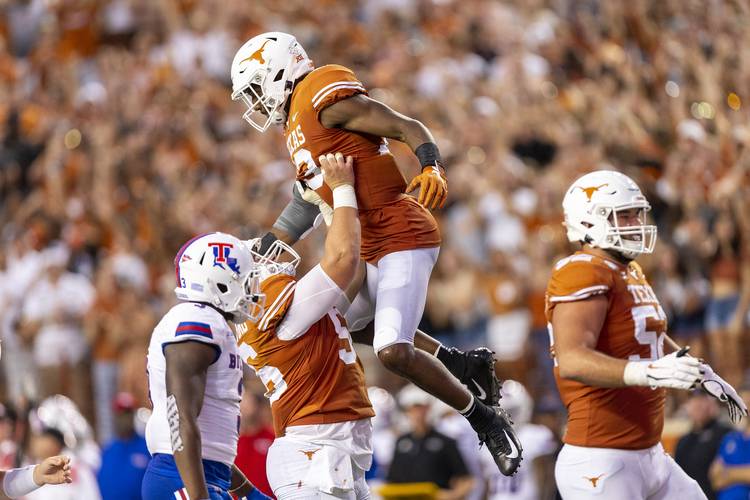 When anyone talked about the season opener, same thing. “La Tech.”

Texas opened the 2019 season with a rather blue-collar, workmanlike performance over Louisiana Tech and notched a 45-14 win Saturday at Royal-Memorial Stadium.

A 31-point blowout over a non-Power Five team in the opener felt quite different from losing twice to Maryland. It’s what 10th-ranked Texas (1-0) is supposed to do in these games, frankly. There wasn’t much hoopla afterward, either. It was all business before, during and after.

This looked like the same physical bunch that finished on a high note last season. Quarterback Sam Ehlinger looked like, well, Sam Ehlinger. He threw for 276 yards and four touchdowns and sat out the fourth quarter. The defense pitched a shutout the first three quarters and held the Bulldogs to 5-of-14 on third down conversions.

“We were rusty,” UT coach Tom Herman said. “Sam missed some throws. We dropped the ball. We had six penalties, which happens in first games. But I thought we started really, really fast, and that’s what helped us overcome some of those miscues.”

Now, the Longhorns can finally talk about the next opponent, the one everybody else has been talking about all summer long — No. 6 LSU. Ed Orgeron’s club walloped Georgia Southern 55-3 in its season opener Saturday in Baton Rouge, La.

“We’ll see them next Saturday,” Ossai said. “Very excited for the game. Can’t wait to get in there and really prepare and breakdown these guys and see what they do. Can’t wait.”

Before Texas finished its win, ESPN announced that “College GameDay” will bring its traveling circus to Austin next weekend. It’ll be the first time it’s set up shop here since 2009.

“We’re all so excited,” Ehlinger said. “It’s what you come to the University of Texas to do. Compete against extremely good programs and do it in front of a lot of people.”

Saturday’s announced crowd of 93,418 sat through 93-degree temperatures to see Texas dismantle Louisiana Tech first, though. And the question centered on how good the offense would be with limited running backs.

Keaontay Ingram said he felt fine, even though he’s been slowed by a bone bruise in his knee. He rushed for 78 yards on 11 carries. Ingram sure looked fine on a third-quarter drive that featured a 12-yard carry, a 13-yarder, a 14-yard screen pass and a 1-yard touchdown run.

“Kind of disappointed in my level of production,” Ingram said. “Simple fact, I don’t feel I helped the team enough. I feel like I need to step it up a little bit if we want to achieve big things around here. So I’m putting that on me.”

Jordan Whittington caught two passes for 17 yards but saw his night cut short when his sports hernia injury flared up. He spent the rest of the night on an exercise bike. Herman also said afterward that new third-stringer Roschon Johnson showed up at the facility Friday with a stomach bug. “When it rains, it pours, you know,” Herman said.

Given the outlay, this night was tailor-made for Ehlinger and his cohorts out wide. Receiver Collin Johnson joked, “It looked like the Devin Duvernay show” early. Duvernay had five touches on UT’s first possession and scored on a 4-yard touchdown pass. Then Johnson snagged a 6-yard touchdown grab in the back of the south end zone.

Duvernay ended up with nine catches for 55 yards, a far more fitting contribution level over last season given his talents. “That’s my boy!” said Johnson, who was content with four catches for 59 yards.

Herman said sophomore Brennan Eagles “was on the operating table two weeks ago” having elbow surgery. The pain appears to have subsided. Eagles had a 28-yard touchdown catch and another from 25 yards out, giving Texas a 31-0 lead in his best game at UT.

Statistically, the Horns had hum-drum figures: 454 total yards and 8-of-15 on third downs. The Texas defense was busy getting after Tech quarterback J’Mar Smith and limiting the Bulldogs (0-1) at every turn. Their offense never got inside the 20-yard line in the first half, getting only as close as the UT 24. Smith had 331 yards passing, but kicker Bailey Hale missed twice from 43 yards out.

Defensive coordinator Todd Orlando will have plenty to nitpick. Cornerback Kobe Boyce was celebrating when Tech receiver Malik Stanley went racing upfield for 26 yards on third-and-11. But fellow cornerback Jalen Green had a perfect read on a corner blitz, batted a pass into the air and Ossai came under it for an interception.

Ossai got another interception in the second half and raced 82 yards the other way for an apparent touchdown. Alas, it was called back for Brandon Jones’ roughing penalty.

That defensive package, along with all the various offensive looks UT showed, will give LSU coaches plenty to think about this week.

This isn’t the same Texas program that’s been pushed around for most of this decade. It’s now one that can put together a so-so performance — based on the new heightened standards — and still win by 31 points.

“I think our team has made real progress, absolutely,” Ehlinger said. “Last year we were in the same situation against Tulsa and didn’t necessarily finish the way we wanted to. But we did a great job to finish that out in the second half. Yeah, it’s great progress.”