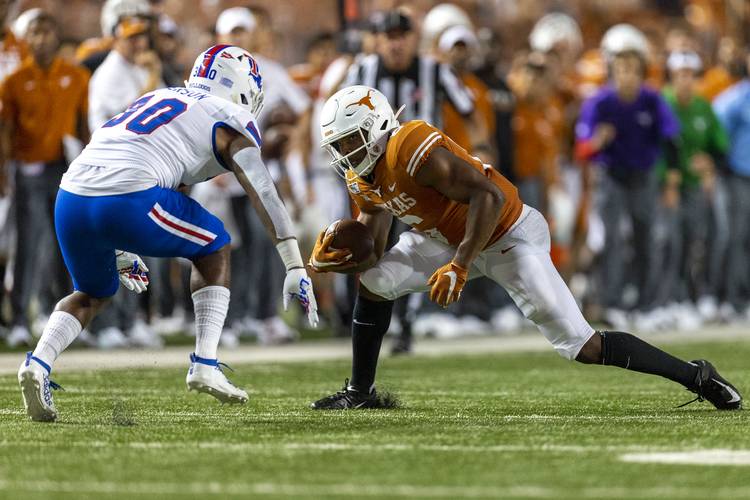 On the first play of the season, Devin Duvernay took the opening kickoff at his 7-yard line and returned it 36 yards.

That was the start of a long day at the office.

Duvernay was heavily involved in Texas’ 45-14 win over Louisiana Tech. The senior was targeted 10 times and caught nine passes thrown his way for 55 yards, including a 4-yard touchdown catch that was the Longhorns’ first score of the season.

The nine catches were a career high for Duvernay, who had two six-catch games in 2018. Last year, Duvernay started 14 times as one of UT’s outside receivers. This year, he has been tasked with replacing Lil’Jordan Humphrey in the slot.

“He has taken to the slot position better than probably any of us could have imagined,” Texas coach Tom Herman said.

Duvernay touched the ball on five of Texas’ first seven snaps. Herman said the team scripted a bunch of bubble screens for him since the Longhorns figured that Louisiana Tech would aim stop the run. Duvernay also drew a 15-yard facemask penalty on a drive in which he tallied four receptions and one rushing attempt.

“He was a big reason why we won this game,” senior receiver Collin Johnson said. “The opening drive, it was the Devin Duvernay Show.”

Name game: During fall camp, Herman told reporters about a third-down defensive package that was being worked on that utilizes eight defensive backs at the same time. Said Herman: “You want to talk about looking like Star Wars for some of these quarterbacks.”

Alas, UT didn’t end up naming that defensive alignment after the blockbuster movie franchise. Instead, the Longhorns debuted their “Cowboy” package against the Bulldogs. The Longhorns trotted eight defensive backs on the field nearly a half-dozen times in the first half.

Texas saw mixed results with the package. On its first showing, DeMarvion Overshown finished off a midfield sack of J’Mar Smith. But Louisiana Tech also beat UT’s eight defensive backs for a 12-yard pass on a third-and-6 play.

In the third quarter, the package forced incomplete passes on third- and fourth-down attempts in Texas territory.

“I couldn’t imagine being a quarterback in that situation because you have people coming from everywhere,” senior safety Brandon Jones said.

My bad: Texas was called for six penalties, one of which took a touchdown off the scoreboard. In the fourth quarter, Jones was called for roughing the passer. That negated what would have been an 82-yard interception return for a touchdown by linebacker Joseph Ossai.

Jones later explained that he and fellow safety Caden Sterns stumbled over each other on the play. That resulted in Jones rolling up on Smith. Jones joked that he caught Ossai eyeballing him in the locker room afterward. Ossai, however, said there were no hard feelings.

“It’s all fun and games, though. That’s my dude,” Ossai said. “It was a mistake. Things like that happen. When I mess up, I hope he’s not holding it over my head.”

Longhorns remembered: Before the game, Texas held a moment of silence for two former players who recently died. Cedric Benson, who ranks second in UT history in career rushing, was killed in a motorcycle accident earlier in the month. And former All-American receiver Johnny “Lam” Jones passed away in March following a lengthy battle with myeloma cancer.

Texas wore helmet decals to honor Benson. Senior defensive end Malcolm Roach, who wears Benson’s old No. 32, entered the field ahead of the game with a Longhorns flag with Benson’s 32 on it.

Moment of silence for Cedric Benson and “Lam” Jones at start of tonight’s game. pic.twitter.com/a7Ba6Neilr