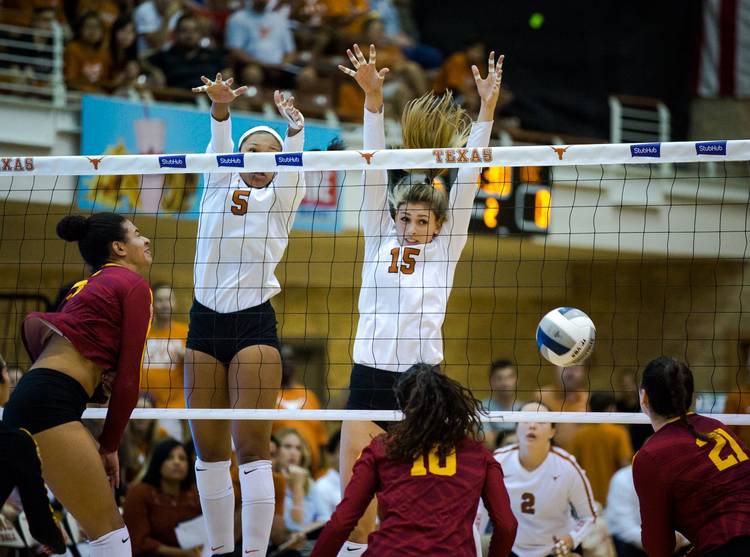 Texas doesn’t have the benefit of an elite schedule of volleyball opponents in the Big 12, so coach Jerritt Elliott arranges a brutal one outside the league early in the season.

That’s an approach he uses to evaluate strengths and weaknesses on his team while building — at least he hopes — a strong enough résumé for a top-four national seed for the NCAA Tournament. The top four teams spend the first two weekends playing at home, providing they keep winning, of course.

That didn’t work for him last year, when the Longhorns suffered losses to Wisconsin and Stanford twice and ended up as the No. 5 seed. They lost in the regional finals to BYU — at BYU.

The schedule only gets more difficult as the Longhorns (2-0) host No. 3 Minnesota on Wednesday before playing at No. 1 Stanford and facing ninth-ranked BYU in Wichita, Kan.

“One of the things I really like about this team is that we’ve been able to challenge them when things have not gone right,” Elliott said, referencing a not-so-easy win against Northern Iowa on Friday. “And the next time they’ve been really, really good. Today we played as a team. We fought defensively, put a lot of pressure on (USC) as the match went on. It’s a great win for us.”

Eggleston led Texas with 16 kills and five service aces. Freshman opposite Skylar Fields had 14 kills and a .458 hitting percentage, best on the team.

One couldn’t spike a volleyball without hitting the daughter of a former NBA player. Texas has two of them, Micaya White (her dad is Randy) and redshirt freshman Asjia O’Neal (Jermaine). Volunteer assistant coach Reily Buechler is the daughter of Jud.

On the other side, Lanier is the progeny of Hall of Fame center Bob Lanier. She had six kills in the first set, including a shot down the sideline for the final point.

“Early in game one, we had about eight or nine opportunities, and we didn’t convert on one of them,” Elliott said.

Then they had a conversation.

“In between the first and second sets, we said, ‘OK, we’re playing good volleyball; we’re just not fully committing ourselves every single play.’ ” Eggleston said. “We came out in the second set and did that.”

Eggleston surely did. Texas jumped ahead 8-0, scoring seven straight points while Eggleston served. She dealt three aces during that stretch and made six kills in the set. Fields matched those six kills for the Longhorns.

Eggleston didn’t let up in the third set, making four more kills and scoring three of the four straight points that gave the Longhorns a 15-8 lead. White brought UT home with two kills and an ace late in the set.

Eggleston had two kills late in the final set, and then Fields finished the match with one.

Elliott detects significant room for improvement, as a coach would this time of year, especially with a roster than includes seven freshmen and sophomores.

“Two and 0, I’m always happy,” Elliott said. “It’s early. It doesn’t define who we are. It defines we have shown some emotional stability, that we can react.”