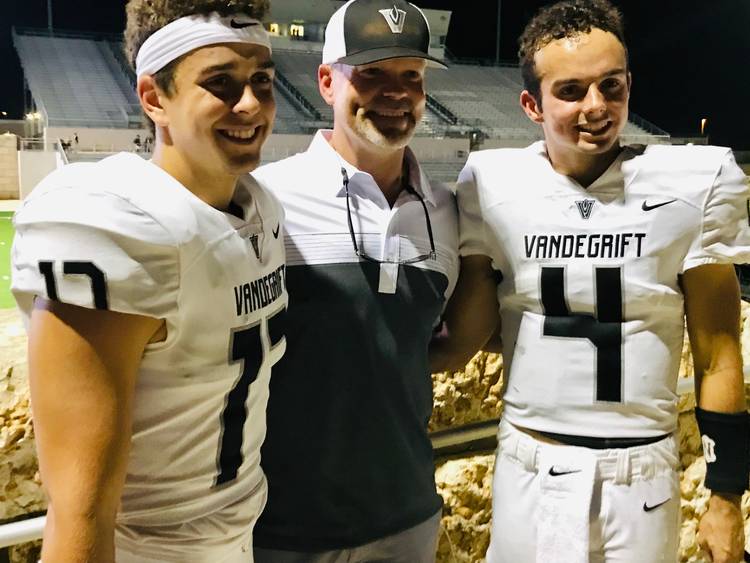 A major chapter of Dawson’s life ended when he signed a one-day contract on Aug. 1 to retire as a member of the Cleveland Browns. After spending 14 seasons of his 21-year NFL career in Cleveland, the former University of Texas place-kicker packed his gear and came home.

It was time to step back from a game he had played since he was a seventh-grader at Lake Highlands (Richardson) Junior High in 1987.

Dawson’s next step doesn’t take him very far from the field. He plans to join his wife Shannon and daughter Sophiann at every Vandegrift football game this fall. Senior Dru Dawson is among the top quarterbacks in Central Texas while sophomore running back Beau Dawson figures to make an impression on a team that went 12-1 last year.

“I had chased my football dreams and it was time to move on, time to pull the trigger,” Dawson told the Statesman last week about his retirement.

Wearing a baseball cap, T-shirt and shorts, Dawson blended in with the 5,000 fans who witnessed Vandegrift drill Cedar Park 17-0. Afterward the Dawsons gathered on the stadium concourse for bear hugs while other Vipers sought their own families.

Phil Dawson said he watched his sons play about four games last year while still a member of the Arizona Cardinals. This will be his first season to be a full-time spectator.

“We missed him when he wasn’t able to watch us play while we were growing up,” Dru said. “But we understood he had a job to do.”

Phil Dawson watched Friday’s game threw two sets of lenses. He watched as nervous dad while Dru directed an offense that would gain 280 yards against a gritty Cedar Park defense. But he also watched as a former player, dissecting plays in his mind and looking for ways his sons can improve.

“I had my dad hat on but it was a juggling act,” Phil said. “I’m learning how to do this. I’m the inexperienced one here. I still haven’t found a rhythm.”

Phil Dawson kicked in the NFL with three teams — Cleveland, San Francisco and Arizona — and he would occasionally take his boys to games. The Dawsons soaked up the experience of game days on the field, in the locker room, at practice.

“Being there helped me see what it takes to make it at that level,” Dru said. “We try to work hard like that every day here.”

In recent years, Phil took a hands-on approach to Dru’s development. While living in Phoenix, he would use FaceTime on Thursday nights to go over game plans for Friday games. Together they watched film of the next opponent or break down plays from previous weeks.

While Phil Dawson made a living kicking the football — he made 411 of his 526 field-goal attempts (83.3 percent) in the NFL — neither of his sons aspired to play his position.

“They saw the life,” he explained. “They have seen how one bad play can ruin a day.”

Dru said he heard boos cascade through the home stadium when his dad would miss an occasional kick. He admitted getting emotional from mean-spirited fans who voiced their displeasure on social media. As a quarterback, he said, he can redeem himself for a bad play on the next series. As a kicker, you don’t always get that opportunity.

But did the Dawson boys ever try to learn the position?

“Yes,” Dru said, “but neither of us could get the ball off the ground.”

Dru took a few good-natured jabs at his father for being one of the oldest players in the NFL. At 44, he played in 305 games, which ranks No. 7 on the NFL’s all-time list.

“Beau and I would go into a locker room and we’d be the oldest brothers in there,” he said. “The other players would have toddlers. … And he was the bald guy. He was older than some of the coaches.”

Phil Dawson plans to “take a year off” before determining what to do with the next chapter of his life. In the meantime he’s going to be a full-time dad and husband. Come Friday night you can catch him at a Vandegrift game, keeping a low profile and watching his boys play the game that brought him fame.

Time to watch his boys chase their own football dreams.

With top-ranked Stanford looming, No. 3 Texas fights back against No. 8 Minnesota