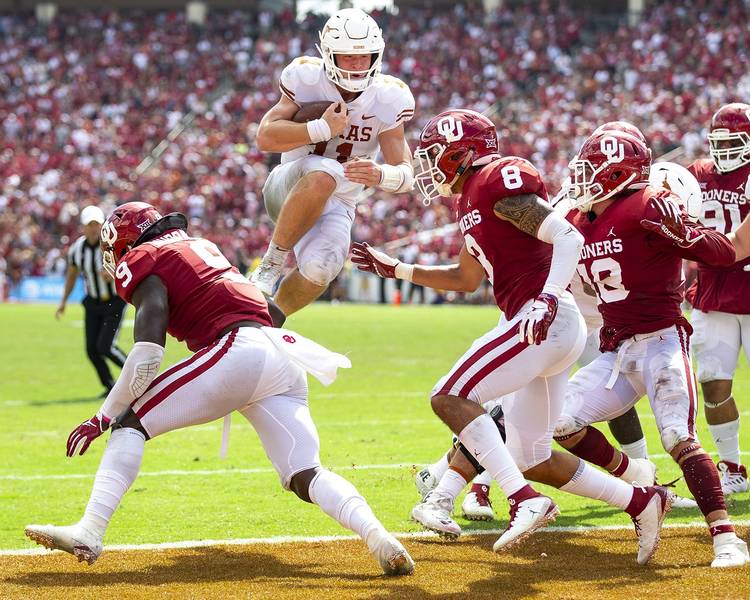 In this Oct. 6, 2018, file photo, Texas quarterback Sam Ehlinger (11) leaps into the end zone to score against Texas during an NCAA college football game at the Cotton Bowl in Dallas. The Texas-Oklahoma rivalry is never short on bad blood between the Big 12 border states. (Nick Wagner/Austin American-Statesman via AP, File)

Basic football logic indicates that Texas quarterback Sam Ehlinger, an athlete who thrives on banging and bruising his way through traffic, would have more run responsibilities this week against sixth-ranked LSU.

To be fair, when Ehlinger spoke to reporters, the Longhorns had not started into heavy LSU game prep. “I’m not sure. We’ll see,” Ehlinger said when asked again. “We’ll see what the coaches game plan this week.”

Ehlinger had eight runs for 34 yards in the season opener against Louisiana Tech. But only one of those was a called quarterback run.

In 24 career games, Ehlinger has put up double-digit rushing attempts 15 times, so he’s used to it. He ran a career-high 22 times in the 2017 Texas-Oklahoma game, 21 times against Georgia in the Sugar Bowl and 20 times against Kansas State as a freshman.

He’s averaged more than 4 yards per attempt in 10 career games and has scored a rushing touchdown in 12 games — half his career. Ehlinger is comfortable diving, jumping, lunging or prancing into the end zone.

Remember what offensive coordinator Tim Beck said about last year’s Maryland loss. He felt the coaching staff “should have run him more.” Banging into bodies, talking smack to tacklers, Beck said, “I mean, that gets him in the game, right?”

The entire offseason was full of chatter about Ehlinger “making smarter decisions.” Run out of bounds, he was told. Avoid big hits, the congregation screamed. That may not be an option this week.

It only makes sense that Ehlinger needs to run more against the Tigers, considering UT’s depleted running back depth. Keaontay Ingram is the only true scholarship running back that’s healthy, but the sophomore can’t do it alone. Ingram has never carried more than 19 times in a single collegiate game.

Is it weird for Ehlinger to see someone else in the huddle these days? Both he and the coaches have said plays are called for specific positions, not necessarily specific players. For example, if the Horns want to call a screen pass for the running back, the call is made and whoever’s in the game is expected to execute.

Now, Ehlinger could see quarterback-turned-running back Roschon Johnson in the game. Or new third-stringer David Gbenda, who was a linebacker this time last week.

“I looked over (during Saturday’s game), and it was Roschon,” Ehlinger said. “I was like, Oh, What’s up bro? This is pretty cool. We were just sitting in the same room a few weeks before. With reps and practice, I’ll get comfortable with guys in the room.”

At least Ehlinger is running behind a capable front five. The Horns’ offensive line paved the way for 153 rushing yards while Ehlinger threw four touchdowns. Backup quarterback Casey Thompson also stayed clean in the fourth quarter to get game experience and lead a touchdown drive.

“They did incredible, incredible in the run and pass game,” Ehlinger said. “We communicated really well. There were a few miscommunications that I’ll take the blame for. But up front, They did a great job of doing exactly what they were coached to do.”

Q. Which ex-Longhorn now playing in the NFL would make the biggest impact against LSU (if magically transported to his peak)? — J.B. in Austin

As it relates to who the Horns could use right now, my first thought was D’Onta Foreman, the 2016 Doak Walker winner who rushed for 2,028 yards his final season.

Wait, something is coming across the wire now…

Q. I was gonna ask if Foreman still had that last year of eligibility but he’s hurt too damn it. — Colby

Turns out a torn biceps injury sidelined him this season, so he’s a no-go at the moment. By the way, I was surprised Foreman reached an injury settlement with the Colts and was let go. I thought Indianapolis wanted to keep him for 2020. Welcome to life in the NFL.

I hate to be the bearer of bad news for all you recruitnicks. But the general populace has no idea who the 6-foot, 220-pound linebacker, er, running back from Katy Cinco Ranch is.

So who is Texas’ new third-string back? Well, he’s a hell of a pure athlete, this much is certain. He was ranked the nation’s 16th-best inside linebacker prospect last year, according to 247Sports. Gbenda ran 13 times and scored five touchdowns his senior year out of Wildcat-type formations.

Q. How do you think our secondary will perform against LSU offense considering Louisiana Tech? — Truitt

I have no concerns about Brandon Jones and Caden Sterns. Those two are going to show up no matter the opposition. Cornerback could be a problem. Jalen Green graded out as a “champion,” coach Tom Herman said. He was the only one who did, though. Kobe Boyce struggled in the first half, and frankly, I didn’t see any highlight-reel moments from D’Shawn Jamison or Anthony Cook.

That said, defensive coordinator Todd Orlando can help the younger corners with safety help over the top. It looked like Chris Brown was everywhere. B.J. Foster had six tackles. DeMarvion Overshown had a sack out of the Cowboy package. Josh Thompson also had five stops, including a tackle for loss.

The real problem with the corners is the same problem cornerbacks have had for decades. They’re positioned on an island where everyone can see their mistakes. Green was the only one I thought would look like a star. The rest simply need playing time.

Q. Can you ask Tom Herman if he could send a few hydration charts to Willie Taggart? — CLHorn94

That had to be the weirdest story out of Week 1, isn’t it?

On his weekly call-in show, Florida State coach Willie Taggart said hydration issues may have been the culprit to the Seminoles having cramping issues in their loss to Boise State. “I don’t know if we did a good job of that last weekend,” Taggart said. “One of those situations where you live and learn, and we’ll make sure that we help our guys when it comes to that.”

The story in the Tallahassee Democrat went viral, and Taggart felt compelled to address the issue Wednesday morning before practice. Essentially, he claimed it was fake news. “I don’t want anyone to take my words and run with it,” he said.

You’ll never hear Herman complaining about poor hydration. That’s exactly why Herman put up the hydration charts inside the UT football building. Players must check their urine color to make sure they’ve got enough fluids in their bodies. It’s hot out there, gang. Stay hydrated.

Freshman Jake Smith caught four passes for 31 yards against the Bulldogs, and he and Ehlinger missed on another pass over the middle. But I saw enough to see why the coaches are in love with Smith in the slot. The Horns are going to get more from him at receiver than they would as a third-string running back. Keep Smith out side and keep feeding him the ball over the middle.

Q. How far along is Casey Thompson as a replacement in the event of a Sam E. injury? — Brian C.

I’m going to presume Brian sent this question while knocking on wood, right? Thompson was 3-for-5 passing for 25 yards, ran twice for 11 yards and generally looked confident. It’s hard to gauge mostly because this all happened in mop-up duty. Still, Ehlinger had nothing but effusive praise.

“I thought Casey did a great job coming in and executing,” Ehlinger said. “He did everything the coaches asked him to do. He got his first blood out of college football, got his first touchdown, I was really happy for him. And for him to go in and operate and lead a touchdown drive was really good to see.”

Q. What would be the score of a La Tech vs. Georgia Southern game if they played this Saturday? — Jim S.

Oh my. Give me Louisiana Tech by two touchdowns. J’Mar Smith threw for 331 yards and two touchdowns against the Horns. Receiver Smoke Harris is going to smoke some opponents this year in Conference USA, too.

Q. Here’s one: what’s the academic recruiting effects of GameDay on campus? — Peyton

If we’re talking academic benefits from hosting ESPN’s “College GameDay,” that’s hard to quantify, if there’s any at all. Well, that’s not really correct. When a school hosts the nation’s most popular, highest-rated college football pregame show on its campus, you create the aura that the campus is hot. You want viewers — mostly high school students — to think, “This must be THE place to be!”

That translates into more applications or perhaps better applications. But let’s be frank. Getting into Texas as a regular student is pretty damn hard as it is. So I don’t see how UT gets any immediate academic bump from hosting GameDay. But the scene should be crazy come 8 a.m. Saturday from the LBJ Lawn.

Got a question for the Whys of Texas mailbag? Send them to Brian Davis at bdavis@statesman.com or on Twitter (@BDavisAAS).

Louisiana Tech: After Ehlinger, who’s the most important Longhorn?