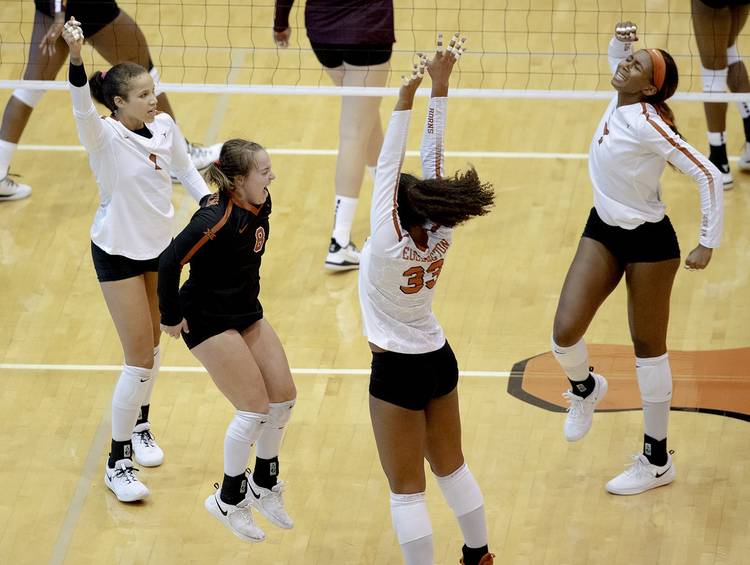 Texas middle blocker Asjia O'Neal (7) celebrates with teammates during an volleyball match against Minnesota on Sept. 4, 2019 in Austin. [NICK WAGNER/AMERICAN-STATESMAN]

Micaya White earned a fist bump from her coach Wednesday night. And a day off.

Now the Longhorns’ attention turns to a Sunday matinée at Stanford, the defending national champions and the top-ranked team in the country.

Texas coach Jerritt Elliott, however, did say that after seven straight days of work, the Longhorns would get to rest on Thursday.

“Tomorrow is a well-earned day off,” Elliott said. “We won’t think about volleyball for them.”

The first chapter of Wednesday’s match was defined by two small scoring spurts, a 4-0 run that gave Minnesota a 19-17 lead and then UT’s four-point response. The final point of UT’s late run — a long rally that was capped by a Golden Gophers attacking error — put Texas up 21-19. Minnesota was unable to pull even with Texas the rest of the way, and White closed out the set with an ace.

The first set featured eight ties and four lead changes. It also was a prelude to an evening full of drama.

In the second set, the Golden Gophers pulled away from Texas for a 24-20 lead. But Texas fought off four set points. And after three more ties, the Longhorns completed their comeback with back-to-back kills by Logan Eggleston and White. After falling into that four-point hole, UT rallied behind four kills from Eggleston while White added two kills and another ace.

The set’s biggest play, though, was made by Elliott. With Minnesota leading 24-22, it was ruled that an attack by Eggleston went out of bounds without being touched by Minnesota. The net camera at Gregory Gym had become unavailable during the match, but there was enough video available for Elliott to challenge the call.

Elliott won his challenge and the set point was overturned.

“It was a major touch, it wasn’t something that I felt like was just a little microcosm touch,” Elliott said. “We got that … and we just made some plays. So awesome.”

Minnesota led for much of the final set, but Texas battled back from nine set points. The Longhorns ran out of substitutions in the set, which forced the team to play 5-5 defensive specialist Claire Hahn at the net. (“That was our game plan,” White said, with a wink). The Longhorns, though, still had White on the floor and the three-time All-American closed out the match with two kills.

“We just had the same mentality that it was going to be a fight,” freshman middle blocker Asjia O’Neal said. “The other team is not going to let us win the game.”

In the post-match press conference, Elliott applauded White’s resiliency and gave his fifth-year senior a fist bump. White hit .000 and .118 in the first two sets. In the third, she recorded 10 kills and bumped her hitting percentage for the match up to .204.

“We’re going to battle for each other,” White said. “We’ve got a lot of fiery kids. It was exciting to be tested and be pushed and see what those freshmen (can do).”

Notes: Texas has opened the season with three wins over teams that reached last year’s NCAA tournament. … Eggleston and freshman Skylar Fields chipped in 15 and 10 kills, respectively. O’Neal led the Longhorns with seven blocks, and her assisted rejection of a Taylor Morgan attempt gave UT a 33-32 edge in the final set. … Minnesota (1-2) was steered by Stephanie Samedy’s 14 kills. … Setter Ashley Shook (ankle) and middle blocker Brionne Butler (lower extremities) remained out with injuries.