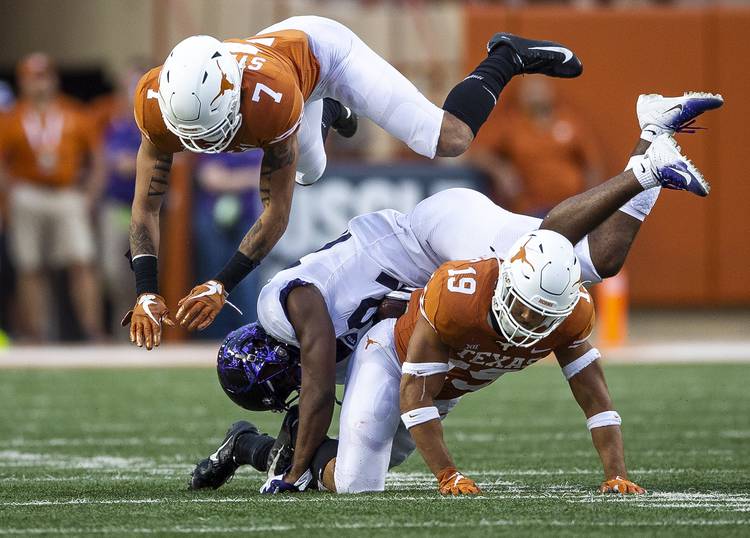 This week’s notable number is 38 — the number worn by sophomore cornerback Kobe Boyce.  After averaging 33.2 pass attempts over his first 20 starts, Texas quarterback Sam Ehlinger threw it 38 times over the three quarters he played against Louisiana Tech.  Herkie Walls caught only 38 footballs while at Texas, but the 25.8 yards he averaged per reception from 1979-82 is a school record.

Thirty-eight also accounts for the amount of tackles that were made last week by Texas safeties.

Advertisement
Four of UT’s five leading tacklers in the 45-14 win — Caden Sterns (eight tackles), Brandon Jones (seven), Chris Brown (six) and B.J. Foster (six) — were safeties. DeMarvion Overshown only had one tackle, but that stop was a key sack and the sophomore also intercepted a fourth-quarter pass.  Montrell Estell (two tackles), Chris Adimora (two), Tyler Owens (one) got into the mix on defense and special teams.

“The (safety) room is so packed with guys who can go,” Sterns said. “There’s so much talent in there. You can definitely tell there’s a lot of dudes who have talent, and I think a lot of dudes you’ll see in the DB room playing on Sundays.”

The aforementioned eight tackles leave Sterns tied with linebacker Jeffrey McCulloch for the team lead. The last safety to lead UT in tackles was Kenny Vaccaro, who had 107 in 2012. Since 1975, eight Texas defensive backs have been the team’s top tackler.

Moving forward, there will be plenty of opportunities for the Texas safeties to add to their tackle totals. Texas coach Tom Herman has previously said that he has six potential starters among his safeties. Last week, the Longhorns unveiled a “Cowboy” package that uses eight defensive backs. Most of those defensive backs are safeties.

“It gives a lot of people an opportunity to get on the football field,” defensive coordinator Todd Orlando said. “That safety position group, (with) all those guys, it’s like how are we going to play this guy? And it’s like, there it is.”

Sterns and Foster were both five-star prospects who signed during the 2018 recruiting cycle. Four-star designations were given to Jones, Thompson, Estell, Adimora, Owens and Overshown. Brown graded out as a three-star prospect in 2016, but Jones described him as a “very confident player. … He brings a whole lot of juice, not just to the DBs but to the overall defense as a whole.”

Texas is set to add four-star recruits Jerrin Thompson and Xavion Alford in 2020.  But can too much of a good thing be bad? When it comes to stockpiling safeties, Jones doesn’t think so.

“At some places, competition is probably a scary thing, and it scares a lot of people,” Jones said. “Here, we really take pride in that.”