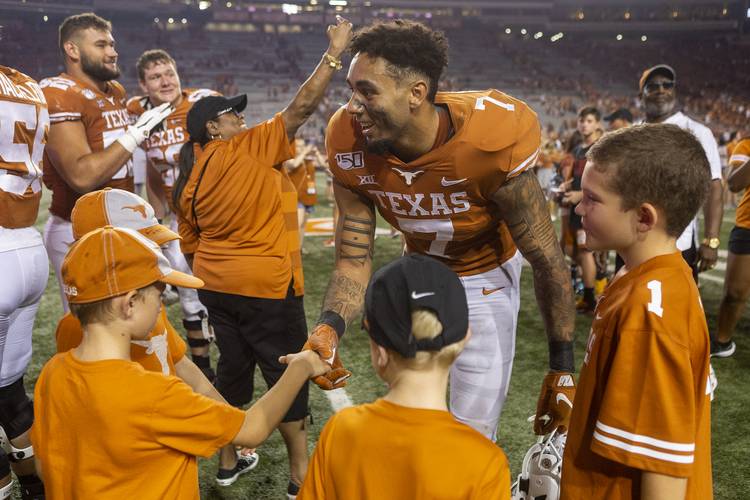 Texas defensive back Caden Sterns (7) celebrates a 45-14 win over Louisiana Tech at Royal-Memorial Stadium on Aug. 31, 2019. [Stephen Spillman for Statesman]

Five questions facing Texas on Saturday night against No. 6 LSU:

1. Will the offensive line keep LSU away from Sam Ehlinger?

Texas coach Tom Herman was mostly pleased with how his offensive line looked in the season-opening win over Louisiana Tech. “I think all of the starting offensive line graded out as champions, so they played well; certainly not perfect,” Herman said. LSU recorded two sacks against Georgia Southern, but the Eagles also only attempted 11 passes. LSU, which returns eight defensive starters, averaged 2.6 sacks per game in 2018. Texas has allowed 40 sacks in Ehlinger’s 21 career starts.

2. Who will Texas start at cornerback?

Of the four cornerbacks who are vying to replace Kris Boyd and Davante Davis, only Jalen Green graded out as a champion last week. The other corners — Kobe Boyce, D’Shawn Jamison and Anthony Cook — got some run, but a premature celebration by Boyce on a completed pass over the middle was the moment that stood out the most. Louisiana Tech’s J’Mar Smith did put up 331 passing yards on the Longhorns, but needed 51 attempts and both touchdown passes were picked up in the fourth quarter of UT’s 45-14 rout.

3. Will either Caden Sterns or K’Lavon Chaisson be ‘the one that got away?’

Texas fans may have a tough time imagining Sterns in another uniform, but Texas’ sophomore safety was once committed to LSU. The Longhorns, though, flipped him ahead of his all-conference freshman campaign. Signing Sterns was a big recruiting victory for Tom Herman, but he hasn’t won every recruiting battle. Texas was a finalist for Chaisson, a four-star defensive end out of Galena Park North Shore, in 2017 but he chose LSU on signing day. Chaisson was awarded the No. 18 jersey this year, an honor given to the Tiger who best represents LSU football.

4. Will LSU be successful running against Texas?

Texas, which had the nation’s 28th-ranked rushing defense in 2018, yielded only three 100-yard rushers last year. None of them were the three backs who went on to be taken in the NFL draft — Oklahoma State’s Justice Hill ran for 92 yards against the Longhorns, Iowa State’s David Montgomery was suspended for a half and finshed with 33, and Maryland’s Ty Johnson had 30. No running back averaged more than four yards per carry. Texas has eight new starters on defense, but Louisiana Tech averaged only 2.8 yards per carry. LSU lost its leading rusher from last season, but the last time the Tigers didn’t produce a 1,000-yard rusher was 2012.

Due to the construction project in the south end zone, the Royal-Memorial Stadium record crowd of 103,507 (for last year’s win over USC) should be safe. Still, this top-10 tussle is one of UT’s most anticipated home games in at least a decade. For its opener against Louisiana Tech, Texas drew 93,418 fans. That was the sixth best crowd in the nation.