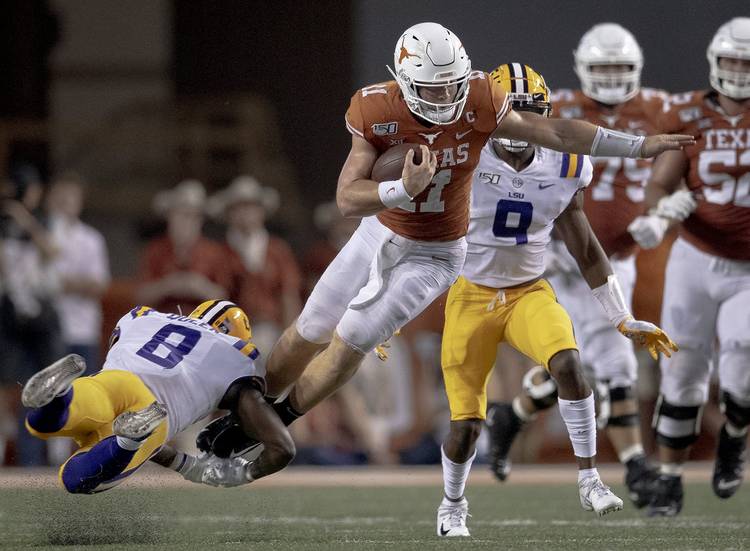 Revisiting our five pregame questions that were facing the Longhorns ahead of Saturday night’s Texas-LSU game.

1. Did the offensive line keep LSU away from Sam Ehlinger?

Ehlinger was sacked five times. In his 22 career starts, he’s now been sacked 45 times. LSU’s defensive front won the battle up front and beyond the five sacks, Ehlinger was forced to zig-zag around the pocket or take off for quarterback runs. By our count, nine of Ehlinger’s 19 runs were specifically-drawn plays for him to run. The other 10 times, it appeared that he scrambled out of pressure or saw openings. LSU returned eight defensive starters from 2018; the Tigers averaged 2.6 sacks per game last season. They had two in the season-opening win over Georgia Southern, though the Eagles attempted only 11 passes. Ehlinger dropped back 47 times.

2. Who did Texas start at cornerback?

Green was a given. He graded out “as a champion” in the season-opening win over Louisiana Tech, according to UT coach Tom Herman. But Boyce was another matter; he struggled last week, getting beat on some passes and infamously giving up on a reception over the middle when he started prematurely celebrating what he thought was an incompletion. But neither Anthony Cook nor D’Shawn Jamison, the two backup corners, flashed enough to warrant a start against LSU. Boyce didnt have as bad a night as he did last week, but did give up a 26-yard touchdown to Terrace Mitchell Jr. on the first play of the fourth quarter.

3. Did either Caden Sterns or K’Lavon Chaisson become ‘the one that got away?’

Sterns, the star safety, originally committed to LSU when he was a five-star prospect at Cibolo Steele but eventually signed with Texas. Chaisson, who was a four-star defensive end at Galena Park North Shore in 2017, chose LSU over Texas on signing day. Neither disappointed Saturday night. Sterns tied for the team lead with nine tackles; Chaisson had five tackles, a sack and a tackle for loss.

4. Was LSU successful running against Texas?

The Tigers finished with 102 yards on 29 carries, an average of 3.5 yards per. Clyde Edwards-Helaire rushed for 87 yards and a touchdown on 15 carries, averaging 5.8 yards. Texas allowed only three 100-yard rushers last season, when Texas had the 28th-ranked rushing defense in the country. Through two games, the Longhorns have allowed an average of 87.5 yards. LSU lost its leading rusher from last season, but the Tigers have produced a 1,000-yard rusher every year since 2013.

That was about 5,000 more than Texas drew for Louisiana Tech — and that also happened to be the sixth best crowd in the country last week. Attendance numbers will be skewed this season, however, due to the construction project in the south end zone. Saturday night’s crowd was loud throughout the game. The all-time record crowd for Royal-Memorial Stadium is 103,507 — last year’s win over USC.