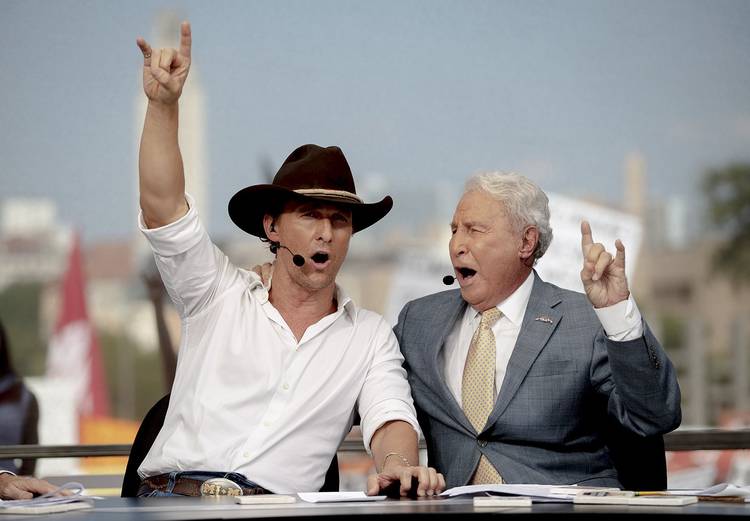 Want to know how popular the show was in Austin as Texas fans began to celebrate the Longhorns’ top-10 date against LSU Saturday night?

Those who desired a prime viewing spot in front of the gigantic set, which was installed on the back lawn of the LBJ Library, just to the northeast of Royal-Memorial Stadium, started queuing up at 2 a.m. Daniel Hatton and his two friends said they slammed cans of Red Bull to keep awake.

Keep in mind that the gates didn’t open until 5:30 a.m. By that time, the line of fans stretched from the stadium a couple of blocks to Dean Keeton.

That’s when Texas athletic director Chris Del Conte showed up, bearing breakfast for 1,000. Your choice — either a breakfast taco or a doughnut. Del Conte had 500 of each.

By his estimate, there were about 4,000 people when he arrived. By the time the show kicked off at 8, the crowd had swelled to nearly 10,000.

They jammed themselves in front of the set to have a direct view of hosts Kirk Herbstreit, Lee Corso and Rece Davis. Or they gathered on the side, finding a seat on the grass. It was a sweaty, humid, 78 at the start of the show. Three hours later, temperatures approached 90 and if you didn’t think about sunscreen before the sun rose, you left with a sunburn.

The sweltering conditions didn’t matter. This was a see-and-be-seen Austin moment that fans had craved for almost a decade, since Texas last competed for a national title in 2009. “Never underestimate a united Texas,” Del Conte said, calling the publicity “priceless.”

Saturday represented the 17th time Texas had been one of the featured teams on GameDay, but the first in Austin since No. 2 Texas played host to unranked Texas Tech in 2009. The first GameDay appearance in Austin was in 1999, when the Longhorns upset Nebraska.

“We’ve been coming here a long time,” Herbstreit said during the broadcast. “And I’ve never left here thinking the Texas Longhorns have much of a home-field advantage. But now it’s a totally different scene.”

The Silver Spurs started the show with a booming blast from Smokey the Cannon. A couple of handlers placed a No. 9 LSU jersey in front of the cannon, then shot through it. Hopefully, LSU quarterback Joe Burrow didn’t notice that Texas was messing with his jersey.

The Longhorn band entertained at commercial breaks. Drummers pounded on Big Bertha to keep a festive beat. The UT cheerleaders were on hand. So was the Pom Squad.

Bevo relaxed in his pen to the right of the set.

As per GameDay tradition, there were signs everywhere.

“Marry me, Sam” said one. Presumably, Longhorns quarterback Sam Ehlinger had his mind on the game. “The New Orleans Saints were robbed.” (LSU fans still were bitter about what happened in the NFL title game.) Lots of placards with “Geaux Home.” There were giant cutout heads of Del Conte, Corso and LSU coach Ed Orgeron, back when he sported a mullet hairstyle.

Noted Longhorns fan and Austin resident Mark Calaway was a featured guest. In pro wrestling, he goes by “The Undertaker.” He took the stage to plumes of fire and pyrotechnic brimstone, throwing up the Hook ’em” sign to the delight of the crowd.

There were some LSU fans in attendance. Wade Martin, a Baton Rouge resident, was in Austin for business. He made sure to bring his giant plush Tiger, which looked more like a real animal than a toy. He’s been bringing it to LSU home games for a decade.

Everyone was there to see Matthew McConaughey, Academy award-winning actor, UT minister of culture and newly announced school professor. His entrance didn’t disappoint. He steered a vintage, burnt-orange Lincoln with a set of longhorns on the grill down Robert Dedman Drive. Speakers were blasting Foghat’s iconic “Slow Ride.”

McConaughey took the stage sporting a brown cowboy hat. His role Saturday was to pick games.

He stayed true to his school. He predicted that Texas “would show grace … in a bloody battle.”

Corso donned a Tiger head and picked LSU. McConaughey playfully pulled off the Tiger hat and tossed it off stage as the UT band started the “Eyes of Texas.”

Show over. But it was only the start of a giant Longhorns party.