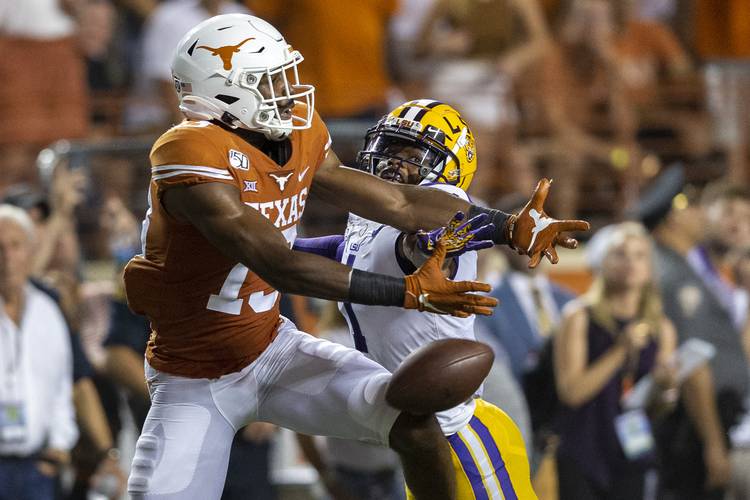 The Longhorns’ national resurrection has been so sudden the last two seasons, you sometimes forget there are mandatory steps in the process.

To win a championship of any kind, every big moment in every big game matters. That was the painful lesson ninth-ranked Texas learned in a 45-38 loss to No. 6 LSU on Saturday night at Royal-Memorial Stadium.

When the offense gets two chances to score from the opponent’s 2-yard line in the first quarter, you’d better score. Otherwise you’ll be chasing points all night long.

Texas had two chances and got nothing.

“Crucial,” UT quarterback Sam Ehlinger said. “The ball inside the 5-yard line twice and came away with no points. It’s unacceptable. We’ve got to do better in the red zone.”

Said center Zach Shackelford: “I just think we had some self-inflicted mistakes. We’ve got to do everything we can to eliminate those.”

When the defense finally forces a third-and-17 and all you have to do is tackle the receiver and prevent a first down, you’d better do it. Instead, the Longhorns watched Justin Jefferson race 61 yards for a game-clinching touchdown with 2:27 remaining.

The Cowboy package worked wonders in the first quarter when Jeffrey McCulloch tipped a ball that was intercepted by Joseph Ossai. But that package, which features the fastest eight defensive backs UT has, was holstered for the game’s biggest defensive play.

Instead of forcing a punt in a six-point game, the Horns (1-1) suddenly found themselves down by 14 after the Tigers scored and got the two-point conversion. They danced out 2-0, too.

“Everything that happened today is fixable on our part, as a defense and especially the DBs,” UT safety Brandon Jones said. “I think it’s, you know, just a shot of reality. We got to open our eyes and know that we’re going to get everybody’s best shot. And we just got to come and execute.”

Ossai said the Horns needed to work on better communication in getting plays called in from the sideline. Otherwise he loved the overall fight, especially after Texas fell into a 20-7 hole at halftime.

“I wouldn’t trade this team for the world, man,” Ossai said. “I’ll keep going to war with these guys every day if I have to. And I want to.”

The Longhorns and Tigers were barking at each other in pre-game warmups over who was the real “DBU.” Well, neither team deserves that moniker after this one. The two DBUs gave up 880 passing yards combined.

Joe Burrow and Ehlinger both threw four touchdowns as the powerhouse programs traded haymakers. For those watching around the country, it was a thoroughly entertaining affair. Burrow completed 31 of 39 passes for 471 yards; Ehlinger connected on 31 of 47 throws for 401 yards.

Ehlinger had what appeared to be nine called quarterback running plays. He finished with 19 carries overall for 60 yards. That was the thrust of UT’s rushing attack, although second-stringer Roschon Johnson showed some life with 32 yards on seven carries.

Yes, Texas fans will be outraged over the secondary play. Burrow went after sophomore cornerbacks Jalen Green and Kobe Boyce with abandon. How the middle of the field was so open was a complete mystery. Three different Tigers had 100-plus receiving yards, a first in school history.

“I’d have to watch the video,” Texas coach Tom Herman said. “I’m not sure that’s hard for me to see from the sideline on every call.”

Herman had a front-row seat for the two biggest moments of the night. First, the offense started cooking when Ehlinger hit Brennan Eagles for a 28-yard catch down to the LSU 8. Ehlinger then had a six-yard rush to the 2-yard line.

On fourth-and-goal, Herman rolled the dice. Ehlinger threw to running back Keaontay Ingram, who was wide open in the end zone. Ingram flat dropped it.

LSU took over at its own 2-yard line, and three plays later, here came McCulloch and Ossai for the Burrow turnover. The Horns had new life at the Tigers’ 4. Ehlinger appeared to score on second-and-goal, but replay officials took the points off the board. On fourth-and-goal from the 1, Ehlinger tried to find a rushing lane to his right and got smothered up for a 2-yard loss.

The winning coach felt differently. “We don’t stop them on the goal line, we’re dead,” LSU’s Ed Orgeron said. “That’s the difference in the ballgame.”

It sure was. Texas lost its mojo while Burrow hit Jefferson for touchdowns from 6 and 21 yards, giving LSU serious first-half momentum.

If Texas gets one touchdown on either early drive, the rest of the game might have a different feel. The Horns would have been up 7-3 early. Fast forward to the end, and Texas would have been driving for the game-tying score, not just to get within seven points.

There’s no doubt the Horns gave as good as they got. Texas had an impressive 19-play, 86-yard drive on its first possession in the third quarter. Four different LSU players went down five times with apparent cramps, prompting boos from the capacity crowd of 98,763.

Funny thing about the stoppages, though. Dang if those Tigers didn’t cramp up after every big play or when UT had the momentum. Officials stopped the game every time, even triggering a TV timeout at one point, giving LSU time to regroup.

Texas players had no cramping issues even though temperatures were well into the 90s. Neither did LSU’s offensive players. “Control what we can control,” Shackelford said. “That’s all we can do.”

Devin Duvernay had a career night — 12 catches for 154 yards and two touchdowns. Eagles had five catches for 116 yards and caught a sizzling 55-yard touchdown catch, the program’s first offensive play of 50-plus yards since 2017.

B.J. Foster was all over the place, getting nine tackles, two sacks and two tackles for loss. Chris Brown continued his meteoric rise, McCulloch made some good open field tackles and Jones played like a veteran.

From Texas’ standpoint, there’s a lot to like, considering there are at least 10 games left. But the lessons learned from this one will resonate for quite a while.

“I think we did prove to ourselves that when we play our best,” Ehlinger said, “we can be really dangerous.”

RELATED: Bohls: Texas is narrowing the gap, but LSU is clearly already there

RELATED: Golden: It’s time to put the DBU talk on the shelf; Texas just needs to get better on the back end

RELATED: Texas-LSU notebook: Longhorns don’t have much to say about cramping Tigers