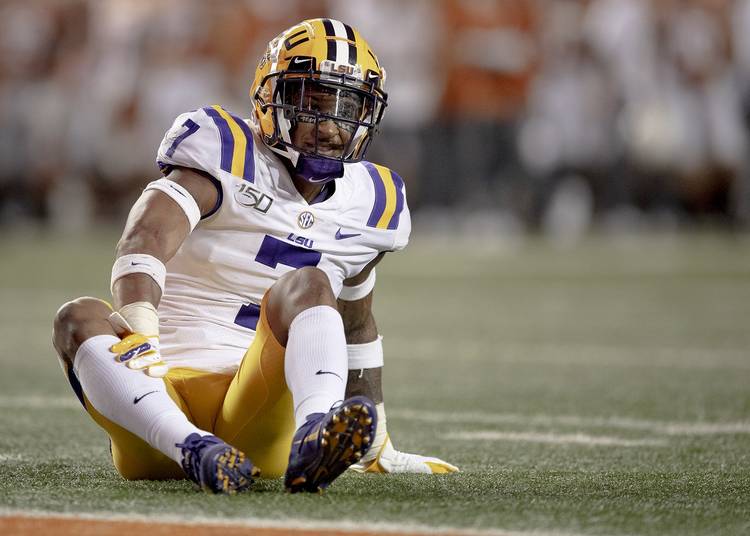 At several points during the second half Saturday night, play was stopped so that trainers could tend to cramping LSU players.

Each cramp forced a stoppage in play. Due to TV, some of those injury timeouts lasted several minutes.

Those cramps also seemed to only impact players on LSU’s defense.

Texas did compile 352 yards and 31 points in the second half, so the impact of the delays was debatable. Quarterback Sam Ehlinger said he didn’t believe the stoppages had an effect. Center Zach Shackelford surmised that UT simply needed to “control what you can control. We can’t control that, so we just move to the next play.”

Texas coach Tom Herman had a different — but succinct — tone when asked about the cramps.

Was the Texas offense thrown off by the stoppages? “Yes,” he answered.

Where they legitimate injuries? “I have no idea.”

In his post-game press conference, LSU’s Ed Orgeron insisted the stoppages were legit. He added that cramping wasn’t his team’s only issue.

“Most of it was (cramps), but some of it was ankle sprain, some of them were knees, they were hurt a little bit,” Orgeron said. “That was a war out there.”

Career day for Duvernay: After opening his senior season with a nine-catch performance, Devin Duvernay again emerged as UT’s top receiver. Duvernay led Texas with 12 catches, 154 receiving yards and two touchdowns against the Tigers — career highs for receptions and yards. It was his second career 100-yard game.

Duvernay also rushed once for no gain and threw an 8-yard pass to Ehlinger.

“Coach calls the play, I just try to do them to my best ability,” Duvernay said. “When my number’s called, I try to make the most of it.”

Duvernay did not account for the only notable performance for a receiver. Freshman Jake Smith caught the first touchdown pass of his career and sophomore Brennan Eagles’ 55-yard touchdown was the longest score of Herman’s UT tenure and Texas’ first play of at least 50 yards since 2017.

Guests of honor: Two of UT’s national champions — former basketball player Kamie Ethridge and the men’s tennis team — were recognized at halftime. Ethridge, who led Texas to the national championship in 1986, officially became the first female student-athlete to have her jersey retired at Texas. Nearly four months after beating Wake Forest for their first national title, the tennis players also received championship rings on Saturday.

Together again! And this time with a little 💎💎💎

…be sure to watch for the team being honored at halftime of the @TexasFootball game tonight! #HookEm 🤘🎾 pic.twitter.com/jy5ArL0DsO

Additionally, Texas honored the conference championships that were won during the 2018-19 school year. The NIT crown that was won by the men’s basketball program was also celebrated.

Texcetera: Herman said after the game that nickel backs B.J. Foster (hamstring) and Josh Thompson (ribs) both suffered injuries near the end of the game and would be evaluated further on Sunday. … Ehlinger’s 401 passing yards were a career high and the sixth most in UT history. … The 19-play, 86-yard touchdown drive in the third quarter was the longest touchdown drive by Texas since the 2010 season. … Collin Johnson has now caught at least one pass in 29 straight games, the fifth-longest streak in UT history. … Linebacker Joseph Ossai recorded his second interception of the season.