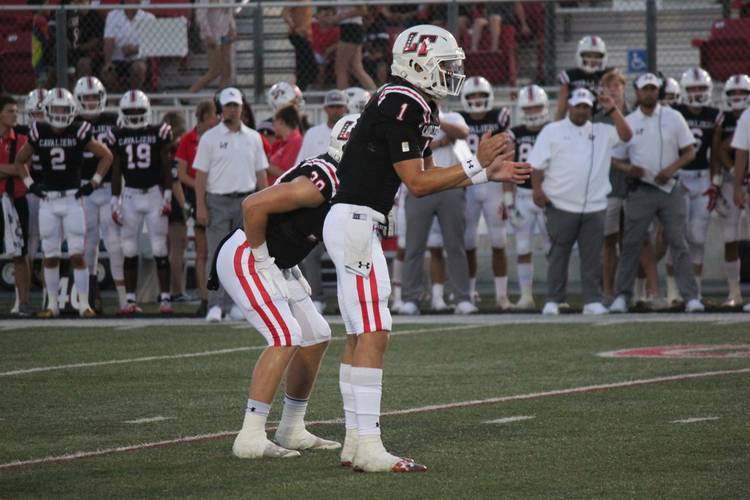 Two future Longhorns faced off Friday night in Lake Travis when quarterback Hudson Card and his Lake Travis teammates outlasted Jaden Hulluaby and Mansfield Timberview, 48-26. Card, a four-star dual-threat quarterback, threw for four touchdowns and scored on a 67-yard touchdown run in the second half to put the game away.

“I’m impressed with Hudson,” Hullaby said after the game. “He’s a great player.”

Hullaby, a three-star athlete, could potentially catch passes from Card down the road in Austin. He played Wildcat quarterback for most of the game for Timberview — clearly out of position, but willing to try and help his team pull the upset. His versatility and unselfishness are reasons Texas first approached the 6-2, 205-pound prospect.

“I’m a Swiss army knife. I’m a versatile player who can play slot, H-back and goal-line running back,” he said. “I’m going to do whatever helps this team, and if that includes quarterback, that is fine.”

Those traits will serve him well in Austin.

Hullaby helped Dallas Bishop Dunne win a TAPPS state championship as a junior. Changes in administration at the private school led his family to move back to Mansfield; Timberview is where he played his freshman and sophomore years.

“I continued communication with my friends here, so it was all good when I came back,” he said.

Friday was a needed win for Lake Travis, which started the season with an uncharacteristic loss to Arlington Martin. The Cavaliers don’t lose consecutive games, and Card thinks the early blip could become a blessing in disguise.

“The loss was a good lesson. It brought us down to earth,” Card said. “We took it well and rebounded with a good week of practice, and that led to a win.”

Card is now the clear face of the Lake Travis program. He was an all-district wide receiver as a sophomore. Five-star receiver Garrett Wilson demanded most of the headlines last year. Card, now a senior, understands the eyes are on him.

“I had to take control more as a quarterback. It’s now my time as a senior,” he said. “I’m trying to soak it all in and enjoy every moment.”

Card and Hullaby attended the Texas-LSU game along with dozens of top targets and fellow commitments. Card’s location to campus gives him a personal advantage, and it allows him to spend quality time with fellow recruits when they’re in town.

“I live here, so if any of them come to town, I can take them out on the boat and get them away from downtown Austin,” he said. “I can go to campus whenever I want to help with recruiting and get as much information as I can before I enroll.”