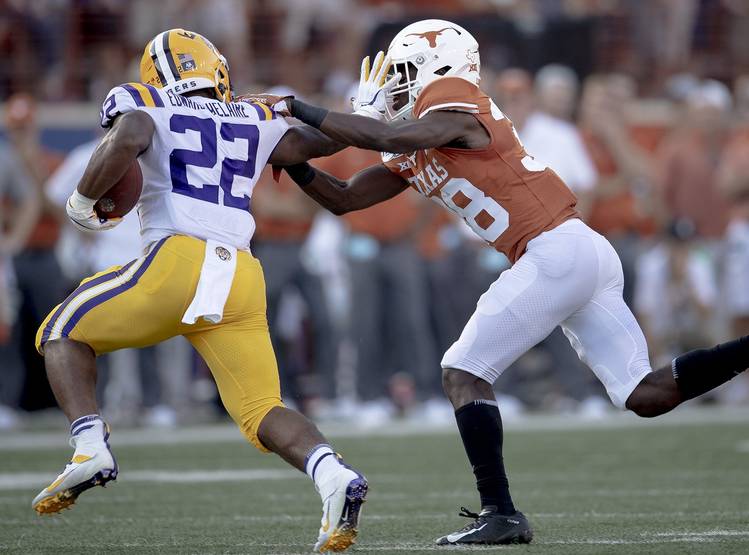 “Yeah, absolutely” Orlando said. “To me, those guys go back out.”

Green and Boyce had their ups and downs the first two weeks. Boyce also struggled against Louisiana Tech’s receivers in week one. LSU had three receivers notch 100-yard games, a first in school history.

But Orlando is sticking with both sophomores this week against a run-oriented Owls squad in hopes that both can gain more confidence.

“Once again, I told you guys this beforehand. This is not going to be set in stone,” Orlando said. “This is going to be in practice. And I’ll tell you, I think Jalen has a chance, he really does. He’s very, very close. And I think it’s going to take just a handful of making some plays and then all sudden he’s going to really start to believe, then you’re going to see something elite.”

Orlando said he’s comfortable with his secondary guys playing press coverage, even though LSU had some receivers blow past the corners for big gains. But he also spent time looking at all the various blitzes that were called to examine what worked well and what didn’t given UT’s personnel.

Orlando said he sent Malcolm Roach a text on Sunday after playing “lights out” against LSU. He also praised Chris Brown and Joseph Ossai. Orlando was most proud of the team’s physical effort against the Tigers.

“I myself went in there and talked to the group. I was emotional, too,” Orlando said. “I love this group. I love how hard they play. I love how much they care, and I’m going to help you. So to me, nothing to do with them. Just keep going, keep swinging, keep going, keep fighting, because you know, we’re really close to breaking through to the other side.”

Bringing the house: Orlando said he would still call a full blitz on the critical third-and-17 play where LSU scored a 61-yard touchdown that effectively iced the game.

When it appeared the Tigers were going forward to win it, Orlando said he was going to try and win it defensively, too.

“The second that we sacked them, that call was coming whether it was third-and-4, third-and-7 or third-and-17. It didn’t matter,” Orlando said.

LSU quarterback Joe Burrow made a terrific play to sidestep pressure, step up just enough and spot Jefferson on his crossing route. “Let’s not sit back and all of a sudden can’t go to sleep at night because he had all day, somebody broke a coverage,” Orlando said.

Speak up: Ossai said Tuesday that Orlando was all over the linebackers to shout out the defensive calls so the defensive linemen can hear the plays. That issue was definitely addressed Tuesday afternoon during practice, Orlando said.

“Those guys (the offense) don’t know what our calls are, just scream it out,” Orlando said. “We really, really went after it Tuesday. I mean, it was out of control.”

Orlando said the Horns do an up-tempo drill where the defensive players are forced to make quick decisions. “I think we got our point across,” he said.

Jones at nickel: With starting nickel B.J. Foster sidelined with a hamstring injury, Orlando said safety Brandon Jones will move over to that position this week against Rice. Jones took over the nickel duties after Foster got hurt against LSU.