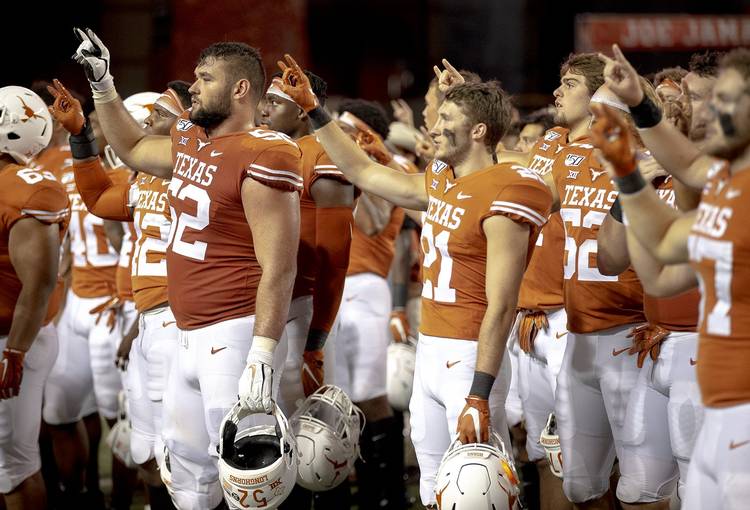 Texas players stand for the playing of "The Eyes of Texas" following Texas 45-38 loss to against LSU in an NCAA football game on Saturday, Sept. 7, 2019, in Austin, Texas. [NICK WAGNER/AMERICAN-STATESMAN]

Sifting through the angry emails, tweets and message board postings, it becomes quite clear that Texas fans demand to know what’s wrong with their Longhorns after the 45-38 loss to LSU.

Well, what’s wrong other than the air conditioner in the visitor’s locker room. Better to blame a hot locker room than your team’s poor conditioning, I suppose. One Texas-LSU game has generated more national attention, headlines and heat than seven LSU-Texas A&M games. Alas, we digress.

Yes, we’ll get to some specifics about the Horns in a minute.

But there’s a simple answer, really. LSU is just fractionally better than Texas at the moment. It’s not a wide gulf, not some Grand Canyon-sized difference. It’s marginal, which means Texas isn’t that far from being a true national title contender.

The Tigers deserve to be ranked fourth in this week’s Top 25. It was correct to move LSU ahead of Oklahoma and Ohio State in the poll. The program should be rewarded for a terrific road win over a top-10 team.

Meanwhile, it’s also correct to drop Texas a few spots just outside the top 10. UT now sits 12th heading into Saturday’s game against Rice at NRG Stadium. But no voter who actually watched the game would punish the Horns that much.

So what makes the difference? Well, first off, the offense has to score when given two chances inside the opponents’ 5-yard line. One emailer had the perfect analogy: It’s like losing the first two holes in a match play golf tournament. You’re chasing and forced to gamble the remaining 16 holes.

Keaontay Ingram flat dropped a touchdown catch on UT’s first crack at fourth-and-goal. On the next fourth-and-goal situation, Sam Ehlinger was snuffed out while rolling to his right waiting for a crease to open up.

If Texas scores on either drive, the Horns take a 7-3 lead and Royal-Memorial Stadium is rocking. I would argue a touchdown there changes the complexion of the entire night. You’ve knocked the Tigers back on their heels, and now they’re the ones chasing.

Both fourth-down gambles were correct by coach Tom Herman. The execution was off.

Defensively, the secondary just isn’t as good as LSU’s right now, but please, for all that is holy, spare me your “Who’s the real DBU?” emails. Neither team earned that moniker Saturday night after allowing 880 combined passing yards.

That’s not a knock against the Horns. LSU safety Grant Delpit and cornerback Kristian Fulton are probably going to be first-round draft picks next spring. The Horns have one senior starter — safety Brandon Jones — and a slew of sophomores.

Special teams were relatively even. LSU’s Cade York and UT’s Cameron Dicker went 4-for-4 on field goals. Both punters were fine, and nobody had an edge in return yardage.

All in all, it was a great game. The Tigers thought they were going to walk into Austin and steamroll the Horns. Instead, they got punched in the face. Every LSU fan that has corresponded with me after the game mentioned a new level of respect for Texas.

“Do we need to improve? Yeah,” UT safety Caden Sterns said Tuesday. “But are we bad? No, we’re not at all.”

On to this week’s mailbag …

If you get a chance at the news conference with Herman, please inquire as to what needs to be done to improve our defense — giving up over 500 yds (471 passing) and 45 points per game will not get it done. If Herman is happy with that, then it will be a long season. — J.D. in Laredo

Two issues really jump out at me after two games. First, there is no consistent pass rush from Texas’ starting three defensive linemen. Malcolm Roach, Keondre Coburn and Ta’Quon Graham have not been credited with a quarterback sack or even one hurry. Roach has made five tackles while Coburn and Graham have one each.

“Stats don’t matter for defensive lineman,” Herman said Monday. “Do you disrupt the offense? And if the answer is yes, you’re doing your job.”

The second issue is how much space the defensive backs are giving receivers. Several times Saturday night, I was stunned at the 10-yard cushion UT’s young secondary members were allowing. Better to give up a cushion rather than give up a home run ball, I suppose. But that speaks to their confidence. It’s going to be a bumpy ride with all four cornerbacks.

Is there enough depth in the defensive backfield to look at making some changes going forward? — Jarred

At corner, only sophomore Jalen Green warrants more playing time. He was up and down against LSU, but hung in there. Kobe Boyce struggled. The Rice depth chart lists Boyce or D’Shawn Jamison as the starters with Donovan Duvernay, Devin’s brother, as the third-stringer. Anthony Cook is listed as Green’s backup.

Frankly, I think the coaching staff truly likes the long-term potential of who they have. But as said before, it’s going to be bumpy while they learn and grow.

Should the NCAA change the rules for “player safety” requiring “injured” players to sit out a series instead of a single play? — Spoetzl

I see what you did there, Spotezl. “Injured.” Look, I’m not going to accuse LSU players of faking injuries during UT’s 19-play touchdown drive in the third quarter. But it was awfully convenient that four different players sat down on the field with apparent cramps five times on that drive. Funny how LSU’s offensive players never cramped up, nor did any Longhorns.

Yahoo Sports reported that LSU’s K’Lavon Chaisson was “winking at the Texas staff when he went down with an apparent lower-body ailment late in the second half.” Make of that what you will. American-Statesman photographer Nick Wagner got an interesting shot of Delpit while sitting down with an apparent cramp injury.

How do you police this? I have no idea. Game officials are always going to err on the side of caution when it comes to player injuries.

When will Daniel Young return and do you think he’d be a good goal-line alternative to Sam for getting those short yardage TDs? — Longhorn94

It still sounds like Young (high ankle sprain) and Kirk Johnson (shoulder) will miss two more games. If Texas can get past Rice and Oklahoma State without them, that would be three more weeks of rest, if we’re including the bye week. Young would be a solid threat in these third- or fourth-and-short situations. He’s 6-feet, 220-pounds and can rumble straight ahead.

IMHO, I believe the lack of game film of the new LSU offense had an effect on the poor defensive showing from Orlando and company? Your thoughts? — CrosSWorKs

Hard to gauge. I still believe the Horns were used to spread offense concepts, so it shouldn’t have been a surprise. Several players mentioned the pace of LSU’s offense being a problem. I thought the Tigers did a good job of getting lined up fast to snap the ball, thereby preventing defensive personnel changes. That’s exactly what you’re suppose to do with a hurry-up tempo.

LSU ran 68 offensive plays. And for all the talk about their new offense, that was five below their average last season. The difference? Last season, the Tigers averaged 5.5 yards per play. Saturday night, they averaged 8.4.

Roschon ran hard and tough, will he be carrying the rock more? — Slammalamma

I thought Roschon Johnson jumped off the screen. He had just seven carries for 32 yards — a 4.6 average. None of his carries went for negative yards. He also had three receptions for 17 yards. I think what we’ll see this week against Rice is a heavy dose of Ingram and Johnson. The coaches will want to get Ingram’s confidence up again and give Johnson more experience. Texas will absolutely need both players during Big 12 play.

Attendance number for the game? — Chandler

Official attendance was 98,763. Remember that Texas is down about 4,000 seats with the south end zone renovation project.

Does coach think that the loss was more attributable to players not executing/performing or was the loss more of a result of poor coaching decisions and/or inadequate preparations? — John

Herman was not going to do any finger-pointing at his players either after the game or during Monday’s press conference. “When you increase your development, you increase your talent pool, you increase your culture and you still have that overachiever mentality of playing hard and fighting and scrapping and all that, that’s when magic starts to happen,” Herman said. “The locker room at halftime, there was nobody feeling that we weren’t in the game.”

And he wasn’t going to second-guess any defensive calls, especially the decision to blitz on third-and-17 late. “He made a great play,” Herman said of Burrow’s pass to Justin Jefferson for a 61-yard touchdown. “We don’t as coaches ever think about shoulda, woulda, coulda.”

Herman probably has a similar mindset as I do. LSU is slightly ahead of Texas at the moment. The Horns just need to keep improving.

Finally, I wanted to wrap up this week with a photograph from ESPN’s “College GameDay” coverage. It was just too funny. Sometimes, you gotta laugh at yourself. We Want Maryland.

This sign literally made me spit my water out this morning 😂 pic.twitter.com/zISwaxoo6b

Have a question for the Whys of Texas mailbag? Send them to bdavis@statesman.com or on Twitter (@BDavisAAS).

Louisiana Tech: After Ehlinger, who’s the most important Longhorn?

The Dotted Line: Who is left for Texas in the 2020 recruiting class?