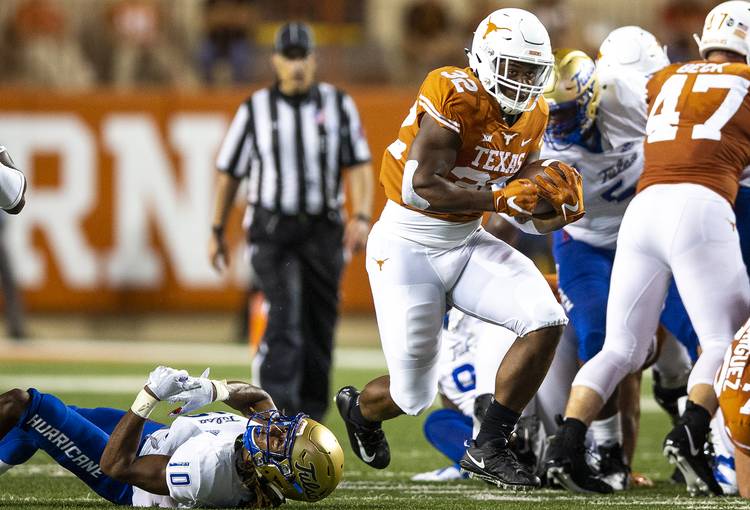 The Texas injury news was good, iffy and bad after Thursday’s practice, according to coach Tom Herman.

Running back Daniel Young, who suffered a high ankle sprain during preseason camp, was cleared to start practicing on Wednesday. That’s a huge help for a position group that’s been depleted with injuries.

“Danny Young is probably gonna play (against Rice),” Herman said. “Obviously he’s a bit rusty, so I don’t know how much he’ll play. But we’re making sure he got through today’s practice well, which he appeared to do. But he’ll get some reps.”

Receiver Collin Johnson will be a game-time decision due to a hamstring issue that’s been giving him problems. When asked if his hamstring was bothering him last Saturday against LSU, Johnson said Tuesday, “Yes, sir. A little bit.”

“We’ve got to be smart with it, because we’re going to need him all season,” Herman said. “But I know he really wants to play. He’s traveling, and we’re assuming he’s playing. We’re going to see how the next 48 hours goes.”

However, it was not good news for safety DeMarvion Overshown. He will miss this week’s game with a back injury. The Longhorns were already planning to be without starting nickel back B.J. Foster, who is also sidelined with a hamstring issue.

“He has a stress reaction in a vertebra in his back,” Herman said. “I know that sounds really bad. But from what I’ve been told, he’s week to week. What that means is its inflamed. Glad we caught it early.”

The Longhorns (1-1) are still 31 1/2-point favorites over the Owls from Conference USA. Kickoff from Houston’s NRG Stadium is 7 p.m. Saturday.