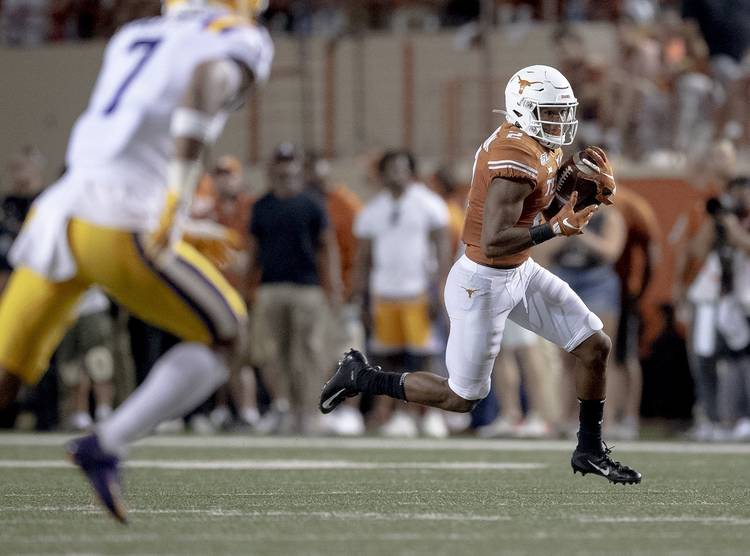 Texas freshman Roschon Johnson (2) runs with the ball against LSU on Sept. 7, 2019 in Austin. [NICK WAGNER/AMERICAN-STATESMAN]

Five key matchups in the Texas-LSU game to keep your eye on Saturday night:

After two weeks, Duvernay’s 21 receptions trail only the 24 catches recorded by Purdue sophomore Rondale Moore on the national leaderboard. After catching 11 footballs in the second half of the LSU game, Duvernay was named the Big 12’s co-offensive player of the week. The senior, who moved to the slot this season, is also over halfway to last year’s total of 41 catches. Eight different receivers have burned Rice for at least 100 yards in the 15 games since the start of the Owls’ 2018 season. Junior safety George Nyakwol is the only starter in Rice’s secondary with double-digit starts on his resume.

Ehlinger has thrown for 677 yards and eight touchdowns this fall. Those stats have been compiled in the midst of two positional duels with Louisiana Tech’s J’Mar Smith (331 yards, two TDs) and LSU’s Joe Burrow (471 yards, four TDs). After Rice redshirt freshman Wiley Green suffered a head injury last week against Wake Forest, Stewart has been placed atop the Owls’ depth chart. Stewart threw for 185 yards on 19 completions in last week’s relief appearance, but the graduate transfer did have a 393-yard, five-touchdown game during Harvard’s 2018 season.

Might we see a halfback pass in this game? Johnson opened UT’s fall camp as a quarterback, but a slew of injuries forced Texas to move the four-star freshman to the backfield. Through two games, the second-stringer is averaging 4.1 yards over his 14 carries. Walter is one of eight Owls who played quarterback in high school but switched positions in college. Once an all-district quarterback at Crosby, Walter has run 26 times for 101 yards during his senior season. Walter, whose twin brother led Rice in rushing last year, has matched his career-high total of 72 yards in games against LSU and Army.

Rice and Texas are tied together by Calvin Anderson, who started 36 games for the Owls before spending the 2018 season as a graduate transfer and left tackle at UT. Fittingly, four graduate transfers will start on the offensive line in this game. Center Brian Chaffin (Stanford), left guard Nick Leverett (North Carolina Central) and right tackle Justin Gooseberry (Ouachita Baptist) make up a Rice line that also starts sophomore Shea Baker, a right guard who attended Round Rock’s Cedar Ridge High. Before he arrived in Austin, UT left guard Parker Braun was a two-time all-conference honoree at Georgia Tech.

While speaking to the media this week, both Ehlinger and linebacker Joseph Ossai used the theory of transitive property to show why they weren’t overlooking the Owls. The Longhorns pointed out that Rice opened its season with a 14-7 loss to an Army team that was just beaten in double overtime by Michigan. Michigan, by the way, is currently ranked two slots above No. 12 Texas in the AP poll. Rice, though, hasn’t knocked off a ranked team since the 1997 season. That victory occurred three years after Rice’s last win over Texas, which was a 19-17 triumph in 1994.

The Eyes of Texas: Four players to watch in Saturday’s Longhorns-Owls game