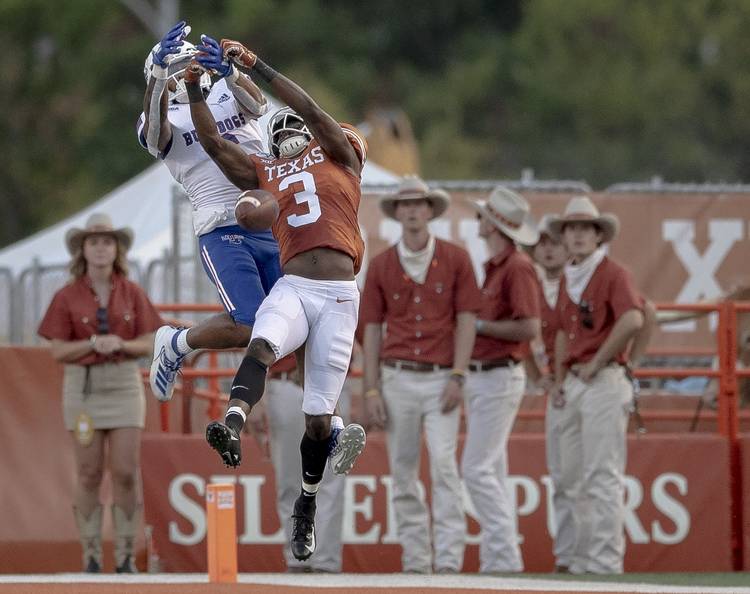 1. Which Houston-area player shines the brightest in his homecoming?

Texas has gobbled up plenty of Houston-raised talent over the years. In fact, seven of the Longhorns who started last week against LSU were recruited out of the Houston area. Will any of those players have a big game at NRG Stadium? Left tackle Samuel Cosmi went to Humble Atascocita. Linebackers Joseph Ossai and Jeffrey McCulloch are from the region. Starting cornerback candidates Anthony Cook, Jalen Green and D’Shawn Jamison all call Houston their hometown.

2. What numbers does Texas quarterback Sam Ehlinger post against the Owls?

Inside of NRG Stadium, Ehlinger has lost a state championship game and guided the Longhorns to a victory in the Texas Bowl. This weekend, he will be expected to build upon a strong start to his junior year. Ehlinger already has eight touchdown passes, and his 677 passing yards are the most for a UT quarterback over the first two games of a season. Ehlinger, who also has a rushing touchdown and no turnovers, is set to face a Rice defense that is surrendering 398.5 yards and 27.5 points per game.

3. After last week’s slip-up, can Texas avoid giving up a big play?

Last season, the Texas defense gave up 10 plays of at least 50 yards. Those 10 plays — four of which came in losses — left Texas ranked 98th nationally in that category. Texas has allowed only one 50-yard play this fall, but that 61-yard touchdown was the proverbial nail in the coffin in last week’s loss to LSU. So far, the longest play of Rice’s season has been senior running back Nahshon Ellerbe’s 54-yard run against Army on Aug. 30.

Against LSU last week, Texas sent sophomore kicker Cameron Dicker out for a 58-yard field goal. If made, that would have been tied for the fifth-longest kick in school history. Texas coach Tom Herman, though, changed his mind after a LSU timeout. Herman said this week that Dicker’s range almost reaches 60 yards and he’d be asked to kick from that distance if a game was on the line. Will Dicker get a chance to showcase his leg on the same stage that crowned Texas punter Michael Dickson as the MVP of the 2017 Texas Bowl?

5. How many ways does Texas score on Saturday?

Texas and Rice have played 94 times before, but this will be the first meeting between the two schools since UT’s 42-28 victory in 2015. In that 14-point conquest, Texas found four different ways to get into the end zone. The Longhorns scored on a rushing touchdown (Johnathan Gray, D’Onta Foreman), receiving touchdown (Armanti Foreman, John Burt), defensive touchdown (Malik Jefferson) and a punt return (Daje Johnson).