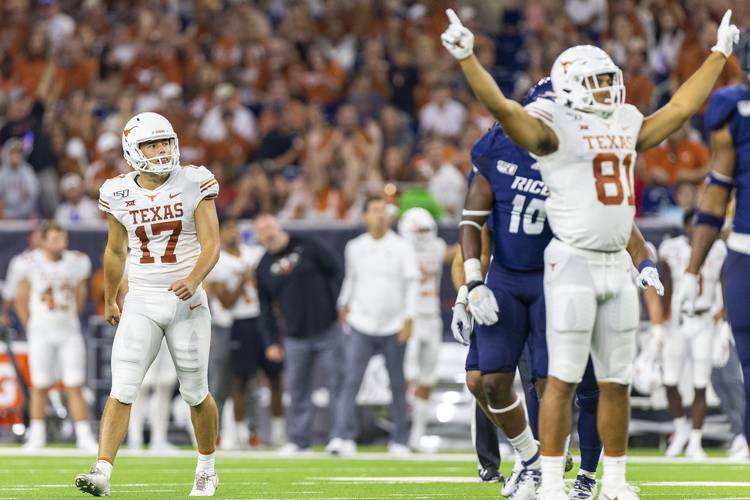 Texas kicker Cameron Dicker (17) watches as his 57-yard field goal goes through the uprights at NRG Stadium in Houston on Sept. 14, 2019. [Stephen Spillman for Statesman]

Revisiting our five pregame questions that were facing the Longhorns ahead of Texas’ 48-13 win over Rice on Saturday night.

1. Which Houston-area Longhorn shined the brightest?

2. What numbers did Sam Ehlinger post coming off the loss to LSU?

Ehlinger has now thrown 112 passes this season without an interception. Through three games, he’s 82-of-112 for 956 yards and 11 TDs. He threw for 401 yards against Louisiana Tech, 276 against LSU and 279 against Rice. He has a history at NRG Stadium; he lost a high school state championship game there at Westlake and led the Longhorns to a Texas Bowl win over Missouri in 2017.

3. Did Texas avoid giving up a big play?

Granted, there wasn’t a back-breaker like LSU converting a third-and-17 into a 61-yard touchdown. But Texas did give up a couple of 40-yard passes, although they did come against UT backups. Those were 45- and 41-yard gains. Last year, the Longhorns gave up 10 plays of at least 50 yards, ranking 98th nationally in that category. So far, Texas has given up just one 50-yarder — that 61-yard touchdown last week.

And then he kicked a really long one.

Remember last week, when Dicker trotted out there for a 58-yard field goal try? Texas coach Tom Herman changed his mind after a LSU timeout. But Herman mentioned this week that the sophomore’s range is nearly 60 yards. So at the end  of the first half, Dicker booted a 57-yard field goal. That’s tied for the seventh longest field goal in UT history and only one Longhorns kicker — Russell Erxleben — has kicked one longer. Dicker added a mere 46-yarder in the second half.

5. In how many ways did Texas score?