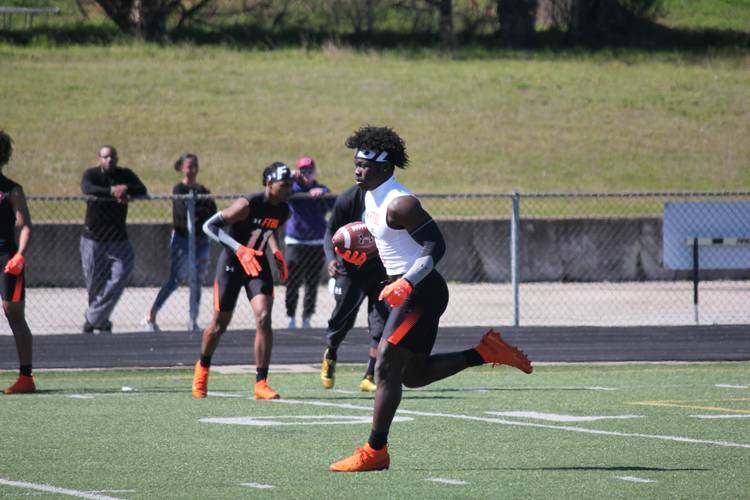 Three-star running back Ty Jordan of West Mesquite at Under Armour Camp in Dallas. (Mike Craven)

The Longhorns added an all-purpose back to the 2020 recruiting class on Sunday night when three-star West Mesquite product Ty Jordan became Texas’ 19th commitment of the cycle. Tom Herman’s program is inching towards another top-10 class after a slow start. The Longhorns currently hold the Big 12’s top recruiting class. Jordan held 25 offers and picked Texas over strong pitches from USC and Tennessee.

Texas plans to couple Jordan with five-star running back commit Bijan Robinson. While Robinson is a three-down option with the size to carry a heavy workload, Jordan is a scat-back with the potential to play running back, slot receiver, and in the return game. Jordan is a two-time all-district selection.

Jordan rushed for 1,236 yards and 16 touchdowns last season, adding 169 yards and two touchdowns on 14 receptions. He’s the No. 11-ranked all-purpose back in the nation and a top-60 prospect in Texas, per 247Sports composite rankings.

Skill set: Jordan is a modern offensive weapon not defined by position. He’ll play all over the field for Texas. Jordan is a potential third-down specialist at running back with the ability to play slot receiver, threaten defenses on jet-sweeps, and contribute in the return game on special teams. The three-star considers his versatility the strength of his game.

“The one-dimensional back that just runs isn’t valued anymore,” said Jordan at the Under Armour camp in Dallas during the spring. “Coaches want backs who are dynamic and are three-dimensional with running, blocking and receiving. It’s a mismatch for a defense. I can go out in the slot and we don’t need to change personnel and that’s an advantage against defenses.”

He’s not big enough to handle every-down running back duties at 5-9, 181 pounds, but he doesn’t need to be in order to fulfill his future role in Austin. Jordan is the type of playmaker Texas missed out on in Mookie Cooper and Ronald Moore. The Longhorns hope he can bring that type of excitement to the offense. He’s the type of player who can create big plays for an offense that lacked those in 2018.

Immediate impact: Jordan should provide Texas an immediate option on special teams and are certain offensive packages. Don’t expect him to enroll on campus and compete for a spot in the two-deep with the likes of Keaontay Ingram, Jordan Whittington, and potentially Derrian Brown. That’s not mentioning Robinson arriving in the same class. That doesn’t mean he can’t carve out a role with a limited number of plays, especially with the new rule allowing participation in four games without losing eligibility.

Fitting into the program: The next step for Texas’ offense is the big play. The Longhorns hope to address that issue on the recruiting trail and Jordan is another swiss-army knife type weapon for Herman and offensive coordinator Tim Beck to slowly work into Texas’ offense. Jordan’s work ethic and a love for the game should translate well into Herman’s blue-collar program.

Recruiting at the position: Texas’ coaching staff, specifically running back coach Stan Drayton, needed a big year recruiting the position in the 2020 cycle. Drayton overachieved by landing Robinson and Jordan, a duo built for Texas’ future offensive plans. The Longhorns couldn’t have done better considering in-state five-stars Jase McClellan and Zachary Evans didn’t join the class. Instead of fans talking about the in-state misses, the duo of Robinson and Jordan give Texas building blocks for the future.