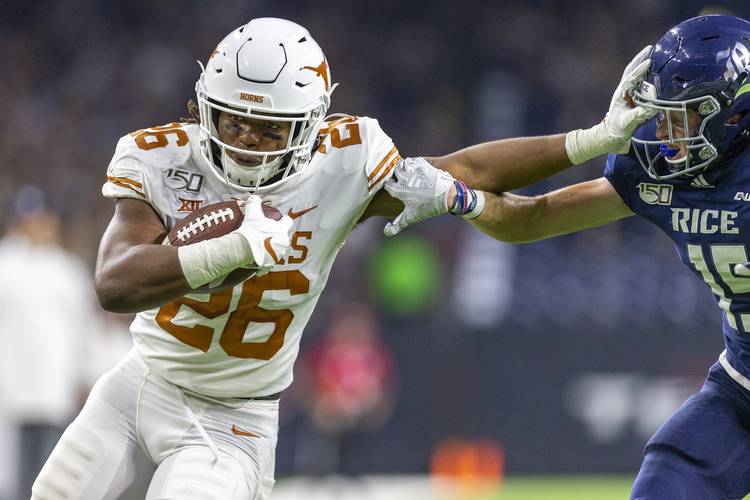 HOUSTON — For all those fans who never get to attend a Texas football practice, Saturday night’s blowout win over Rice was basically the same thing.

The 12th-ranked Longhorns drove the seven-man sled disguised as the Rice Owls up and down NRG Stadium. There was a time when this old Southwest Conference matchup was competitive. Not anymore, though.

On a day when Big 12 schools were trouncing their non-conference foes, Texas captured a 48-13 victory in crisp, concise fashion. The first half was really all anyone needed to see. The second half felt like 42,417 fans were sitting through a staff meeting.

“Tonight was a frustrating day to be a coach,” Rice’s Mike Bloomgren said.

The Horns (2-1) had 350 total yards in the first half while the Owls had just two first downs. UT’s five touchdown drives in the first three quarters went 82, 90, 73, 79 and 91 yards. Second- and third-teamers closed the place up.

Rice (0-3) scored with 1:07 left to cause heart palpitations in the desert. But D’Shawn Jamison answered with a 98-yard kickoff return for a touchdown seconds later, UT’s first since 2012.

This was total domination from start to finish as the Horns finished non-conference play with a thumper. Texas starts the Big 12’s nine-game survivor series next week at home against Oklahoma State.

“The same thing y’all see on the field is the same thing we feel,” linebacker Jeffrey McCulloch said. “We’re leaps and bounds ahead of our first year with coach (Tom) Herman. This is definitely a showing that we’re about to be an elite team, and I’m excited to see where we go this season.”

On days like this, coaches like to get in, get out and don’t get anybody hurt. Receiver Collin Johnson (hamstring) was held out as a precaution. But center Zach Shackelford wasn’t so fortunate.

Shackelford aggravated the same sprained foot injury that he first suffered in August, Herman said. A team captain, Shackelford will have an MRI on Sunday to see what happens next. “You know, I’m not a doctor, but I would imagine he’s going to do everything he can to play this week,” Herman said.

The Horns got the ball first and came out firing, mostly to get running back Keaontay Ingram going. The sophomore who struggled against LSU touched the ball on UT’s first five plays (three runs, two receptions). He would later score on a 26-yard touchdown run on fourth-and-3 where he stiff-armed a Rice defender before crossing the goal line. And he had another 14-yard score that looked easy peasy.

“First touchdown, it was easy peasy as well,” Ingram said. “I’m going to give that to my O-line, both of those touchdowns.”

Ingram’s mindset been a hot topic all week after his dropped touchdown pass in the end zone against LSU. He said the entire team picked him up. As Ingram did interviews in the stadium tunnel, Keondre Coburn came out and started shouting. Two other Horns pulled out their phones and took pictures of the giant scrum.

Ingram finished with 74 yards on 13 carries, an average of 5.7 yards per touch.

Ingram now has a budding sidekick in Roschon Johnson. The freshman dazzled with a 25-yard touchdown catch on a wheel route for UT’s first score. He tallied up 59 yards on 11 carries and showed pop every time. Daniel Young (four carries, 16 yards) also got his first action this season after an ankle injury. That should ease the burden on that position group going into Big 12 play.

The freshman really coming on is receiver Jake Smith. He ran under a nice deep ball from Ehlinger for a 53-yard touchdown catch down the seam. Later, he reeled in a 12-yard score that gave Texas a 28-0 lead.

Smith had six catches for 75 yards and now has three touchdowns on the season.

“I was kind of surprised the first game how, you know, I was expecting something so much different,” Smith said in his first interview as a Longhorn. “And at the end of the day, it’s just football, the game I’ve been playing for so long.”

The Owls were totally discombobulated by the Horns’ defensive approach. Defensive coordinator Todd Orlando promised a four-linebacker look, and quarterback Tom Stewart did as best as a Harvard graduate transfer could. Rice had just 56 total yards the first half as Stewart was 3-for-7 passing.

There just wasn’t much for the athletic Texas defense to worry about. The unit forced an over-matched Rice outfit into four consecutive three-and-outs while the offense rang the register and put it away. What’s a Longhorn to do?

“Getting hydrated, going over adjustments that we make, things like that and just watching the offense, go to work and getting some rest,” defensive end Malcolm Roach said.

Internally, the Texas defensive coaches have a lot to build on. Linebackers Ayodele Adeoye and Juwan Mitchell combined for 10 tackles and a sack. Coburn was disruptive, getting his first sack of the season. Kobe Boyce nearly had a pick-six but couldn’t quite haul in a pass after reading the quarterback.

UT’s Cameron Dicker drilled a career-long 57-yard field goal and then followed that with another from 46 yards. It truly was an all-around shellacking.

Next comes the Oklahoma State Cowboys, a team that’s won five straight in Austin. Don’t expect any gimmes from here on out.