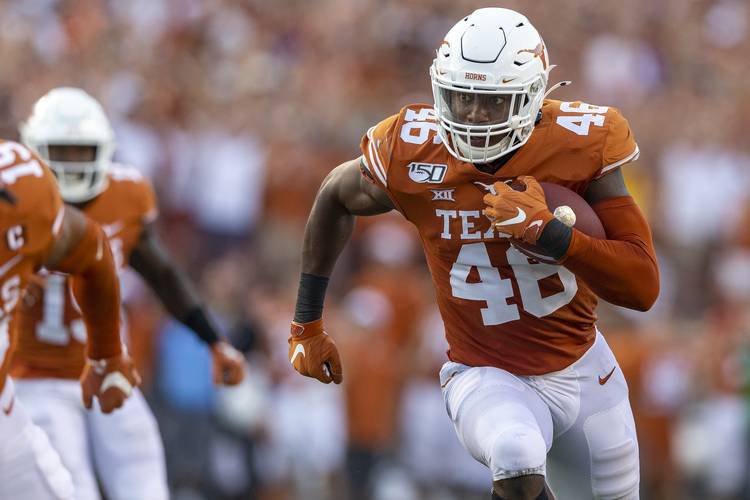 Texas linebacker Joseph Ossai (46) runs back an interception against LSU at Royal-Memorial Stadium on Sept. 7, 2019. [Stephen Spillman for Statesman]

With Texas set to battle Oklahoma State’s Cowboys this weekend, some burnt-orange reinforcements could arrive just in time.

On Monday, Texas coach Tom Herman designated center Zach Shackelford, receiver Collin Johnson and linebacker Joseph Ossai as probable for Saturday’s Big 12 opener. Shackelford (foot) and Ossai (sprained shoulder) were hurt in last week’s 48-13 win over Rice. Due to a hamstring injury, Johnson did not suit up for the game.

Herman stated at his press conference that Johnson and Ossai will both be participants when UT resumes practice on Tuesday. Shackelford, however, will be limited.

In addition to being senior captains, Shackelford and Johnson are key cogs in the UT offense. Shackelford is in the midst of his fourth year as UT’s first-string center, but various injuries have cost him starts in each of the past three seasons. Johnson’s 157 career catches rank eighth on the all-time chart at Texas.

A sophomore, Ossai has registered 13 tackles and a sack this season. He is also responsible for two of the defense’s three interceptions.

Not all of UT’s injury-related news was promising. Defensive backs B.J. Foster (hamstring) and DeMarvion Overshown (back) have already been ruled out for this weekend. Herman said there is optimism that both will return after UT’s upcoming bye week.

Praise for Gundy: As Oklahoma State’s long-time head coach, Mike Gundy has compiled a 7-7 record against Texas. Oklahoma State currently owns a four-game winning streak over the Longhorns. Gundy and the Cowboys last lost in Austin in 2008.

On Monday, Herman was asked for his opinion on how Gundy has kept Oklahoma State competitive over the years. He said Gundy has done a good job of evaluating talent in recruiting and “recognizing some diamonds in the rough.” Herman then noted that Gundy’s development of players has been solid.

Oh, and then there’s the Oklahoma State offense. Since Gundy took over in 2005, Oklahoma State has averaged less than 30 points per game only three seasons. Owners of the country’s No. 13-ranked scoring offense in 2018, the Cowboys have topped 50 points in two of this year’s three games.

“Obviously, his offenses speak for themselves,” Herman said.

Special snub?: Texas was shut out on Monday when the Big 12 revealed its list of weekly award winners. The conference honored Oklahoma State running back Chuba Hubbard (offensive), West Virginia receiver Sam James (newcomer) and the Kansas State tandem of defensive back Denzel Goolsby (defensive) and receiver Malik Knowles (special teams) as its players of the week.

The best shot that Texas had came on special teams. D’Shawn Jamison’s 98-yard return against Rice was UT’s first touchdown on a kickoff since 2012. Cameron Dicker also booted a 57-yard field goal, which is the longest field goal in the country in the last three years, since Arizona State’s Zane Gonzalez was good from 59 yards in 2016.

The Big 12, though, awarded Knowles for his 100-yard kickoff return on Saturday. That touchdown forced a 24-24 fourth-quarter tie at Mississippi State. The Wildcats went onto preserve their undefeated record with a 31-24 win.