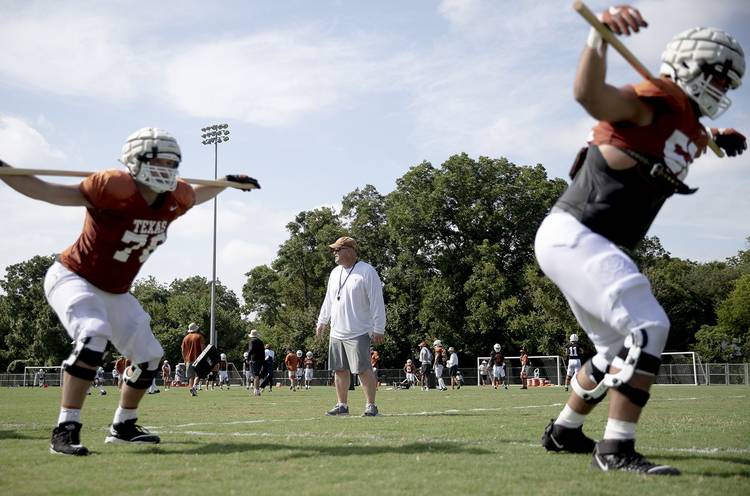 Even in an alternate universe, Derek Kerstetter would still be playing football at Royal-Memorial Stadium this week.

Kerstetter, Texas’ junior offensive lineman, will start Saturday’s Big 12 opener against Oklahoma State. But had things played out differently — say, Charlie Strong beats Kansas on that November afternoon in Lawrence in 2016 or Houston’s Tom Herman takes the job at LSU, not Texas, one week later — Kerstetter might be playing for the Cowboys. He was one of Herman’s first signees at Texas, but he also once was committed to Oklahoma State.

He committed to Texas on the day after Christmas in 2016. His first two Texas-Oklahoma State games have admittedly been “a little weird.” The versatile lineman from San Antonio has started 18 career games at right tackle and right guard.

“I’ve wondered (what it would’ve been like had he signed with OSU), but I’m super happy here at Texas. I love everything about it,” Kerstetter said. “I wish the best for those guys and they wish the best for me.”

Though they were pulled from different boxes, these pieces have fit the puzzle that is Texas’ offensive line. The Longhorns needed to replace three starters and tight end Andrew Beck this season. Through three games, Texas is rushing for a respectable 148.3 yards per game while allowing an average of 2.3 sacks.

Hand’s work has often been applauded since his arrival in Austin ahead of the 2018 season. Additionally, strength and conditioning coach Yancy McKnight is routinely cited. And under Herman, Texas has been patient with the development its linemen.

Since the start of the 2017 season, Kerstetter has been the only true freshman offensive lineman who has played that first season. He was pressed into action three years ago, but the Longhorns redshirted both Cosmi that fall and right guard Junior Angilau last season. Herman has said that Cosmi sat so he could gain weight while Angilau needed to adjust after playing in a triple-option offense in high school.

“Staying out that first year, kind of getting down the speed of the game really, really helped me develop as a player,” Cosmi said earlier this year. “Sitting out my first year was really crucial in my collegiate career so far.  I think it really helped a lot.”

Of the starters on the line, only Angilau was rated higher than a three-star prospect in high school. Shackelford, who injured his foot against Rice but is probable for this weekend, has dismissed the importance of those prep recruiting rankings. He recently conceded, however, that “naturally when you’re ranked lower than somebody, you want to be better than them.”

Also creating a chip on the shoulders of the linemen? The fact that Kerstetter, Cosmi and those two tight ends belonged to Herman’s largely-panned 2017 transition class at Texas. The 18-player group ranked 25th nationally. Since 1999, no other collection UT class had been rated lower than 17th.

Things have worked out for the Class of 2017, though. Seven of those recruits, including quarterback Sam Ehlinger, will likely start on Saturday.

“I feel like we’ve had a lot for a class that was pretty disrespected coming into Texas,” Kerstetter said. “It’s been really exciting seeing all these guys that weren’t the highest-rated recruits, just to come in and really do some special things here and be part of a class that hopefully (will) be remembered when Texas has done something here.”