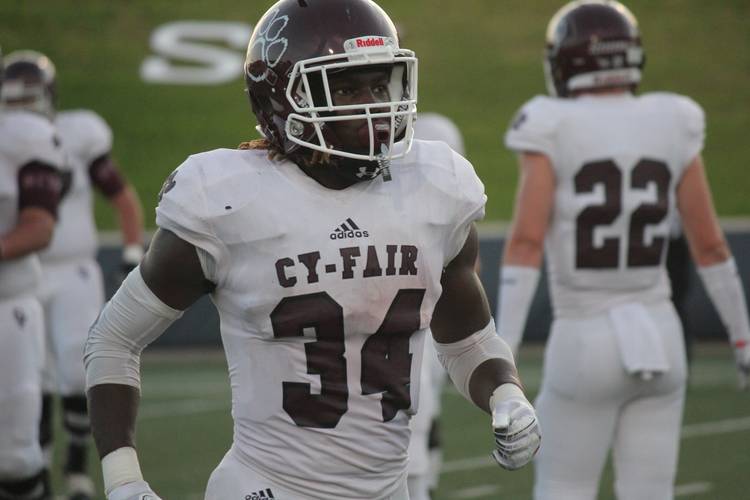 CYPRESS — Texas’ 2020 recruiting class is nearly wrapped up. Head coach Tom Herman admitted as much Monday at his weekly press conference when he stated that the 2020 cycle wouldn’t be a full 25-man class. Herman’s reasoning was a lack of attrition. Another possible reason is the bevy of in-state talent in the 2021 cycle.

The Longhorns already hold eight commitments for 2021. It’s the second-ranked class in the nation. One position lacking a commitment is running back. Three in-state prospects already hold an offer from Herman’s program. Four-star LJ Johnson of Cy-Fair High School is one of those players. The 5-10, 204-pound speedster played for only a half in a blowout win over Houston Northbrook last Friday.

“The Texas offer was great and very unexpected,” Johnson said after the game. “It also means a lot because I was one of the few running backs Texas offered, so I feel pretty good about them.”

Johnson is the seventh-ranked running back in the 2021 cycle. His offer list includes LSU and Alabama. Johnson was the newcomer of the year in District 17-6A as a sophomore. He rushed for 1,139 yards and 20 touchdowns on 164 carries. The four-star isn’t ready to narrow down his schools. Instead, he’ll wait and figure out which schools want him the most.

“Going forward, I’m really just seeing what schools consistently contact me and let me know what the plan is for me if I come there,” he said. “I’m looking for a school with coaches who can make me better as a player and a person.”

Cy-Fair is one of the top Class 6A programs in the state. The undefeated Bobcats are led by a backfield including Johnson and quarterback Carter Cravens, who values his star running back on and off the field.

“LJ is a special player for not only what he does on the field, but also off of it because he is always level-headed,” Cravens said. “He’s a great example for the guys in our program.”

It’s easy to forget these recruits are just now entering their junior seasons with so much of the recruiting spotlight now focused on the 2021 cycle. Johnson has three games under his belt. He thinks the offseason work turned into improvements.

“I’ve improved my footwork and my ability to make cuts in tighter spaces,” he said. “I’ve also improved my pass protection.”

Other UT running back offers:

The five-star from Garland was on hand to watch Texas battle LSU. Wheaton is the top-ranked running back in the 2021 class and a national top-10 player. He can pick any school in the nation. Texas hopes to keep him away from the SEC. The 5-11, 190-pounder gained 1,986 yards and 25 touchdowns as an underclassman.

Campbell is a 5-10, 190-pound four-star talent with a powerful build. He’s now at Pearland after spending his sophomore year at Katy Taylor, where he rushed for 676 yards and five touchdowns. He proved his ability as a receiving weapon, catching 13 balls for 198 yards and two touchdowns. Campbell is close to current Texas commits Hayden Conner and Jalen Milroe.