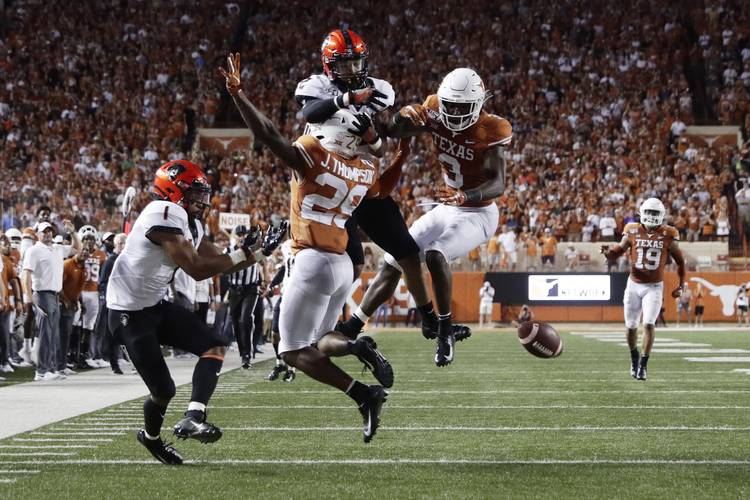 Tackling the nation’s leading rusher is easier than getting your hands around the nation’s hottest chicken sandwich, apparently.

“Go get that Popeyes chicken we got out there in the back,” strength coach Yancy McKnight told the team in the locker room, based on a short video clip posted on UT’s social media.

The Horns in unison: “Hooray!”

Chicken sandwiches, rest and relaxation were all welcome after a physically exhausting win in the Big 12 opener. The Longhorns, who moved up to 11th in this week’s Associated Press Top 25 poll, need an off week, given this team’s injury situation. Texas (3-1) won’t play again until a trip to West Virginia on Oct. 5.

One Longhorn in particular might prefer to keep grinding. Running back Keaontay Ingram had a career night against the Cowboys. The sophomore rushed for 114 yards on 21 carries and had a dazzling 26-yard reception to fuel a key touchdown drive late.

Walking through the hallway after his postgame press conference, Herman said, “Best game since he’s been here.”

This was the Ingram players and coaches see in practice every day. They defended the Carthage product after his end zone drop against LSU because they knew his true potential.

“Just getting back to myself. I don’t know how else to put it,” Ingram said. “I’m not going to make no excuses. I’m not the type of guy who makes excuses. Just playing Keaontay football. I’ll put it like that.”

It was obvious that wearing a protective brace bothered him, though. Ingram ran for 74 yards against Rice and made it clear afterward he hated it. Asked how he felt against OSU without the brace, Ingram said, “Way different, way different. I felt way different.”

Ingram said he was just fine with Roschon Johnson getting his first touchdown run to cap a 73-yard drive. Johnson also caught the two-point conversion pass as Texas took a 36-23 lead with 11 minutes, 44 seconds remaining.

“Oh, man. I was excited,” Ingram said. “You see me jumping up and down with him? We’re doing it for each other. It doesn’t matter who scores. As long as we get the job done, execute, win and go to the next game, that’s all that matters at the end of the day.”

Still, Ingram knows the Longhorns can ill afford overall sloppy performance if they are to win a Big 12 title. That includes getting more from the running backs, too.

“We need more explosives in the running back room, for sure,” Ingram said. “If you want to do special things around here, it’s going to take more than it did tonight.”

It’s going to take more healthy players, for sure. The injury list is getting quite long. Like Popeyes chicken, it was MRIs for everyone.

Herman said freshman linebacker Marcus Tillman suffered a sprained knee on the opening kickoff. Tillman needed help to leave the field and did not return.

Herman said safety Caden Sterns “came down awkwardly on that pass deflection” near the UT sideline and was injured. Sterns, who had a team-high 12 tackles and one tackle for loss, did not return.

“Hopefully we can get B.J. (Foster) and DeMarvion (Overshown) back for the next game, and we can minimize some of the damage there in the secondary,” Herman said. Both Foster and Overshown have missed multiple games with hamstring and back issues.

Meanwhile, everyone who’s healthy will spend this week focused on issues that cropped up against Oklahoma State. Like catching punts, for example.

Freshman Jake Smith and senior Brandon Jones both muffed punts, and the Cowboys turned both miscues into points.

“Usually when I go back there, I’m pretty aggressive,” said Jones, who did not duck any questions about his mistake. “It was kind of out of my reach. At that point, I really should’ve made a ‘peter’ call and made everybody get out of the way. But I fair caught it, ran up and, I don’t know, tried to slide and catch the ball, and I just missed it.”

The Longhorns’ defense held Hubbard to 121 yards, well below his average of 173.7. Texas tallied 12 tackles for loss and snuffed out a fake field goal.

Oklahoma State had 14 drives and scored only three touchdowns. Two ended with interceptions. Two more were turnovers on downs. The Cowboys also got three field goals. That’s a winning formula every week against a team likely to finish among the nation’s best offenses.

For Texas to make some vital mistakes and still get a win speaks to this team’s renewed psyche. Style points don’t matter in this business.

Winning is the only thing that matters.

“The elite teams that I’ve been a part of could win ugly or could win without their A game,” Herman said. “We certainly don’t want to make a habit of that, because it will bite you.”