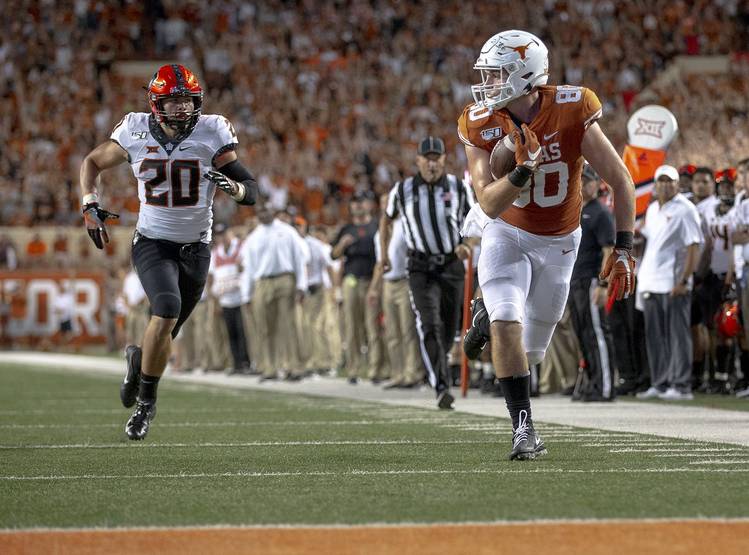 There were 160 snaps taken in Texas’ 36-30 win over Oklahoma State on Saturday night. Here are five that ended up making a big difference:

After Oklahoma State exited the first quarter with a 3-0 lead, the Longhorns and Cowboys combined for 38 points in the second. Texas quarterback Sam Ehlinger threw two touchdown passes over the first seven plays of the second quarter. The second touchdown toss was Ehlinger’s 49th as a Longhorn. It was set up by a teammate’s first turnover.

Ehlinger ended the evening with four touchdown passes. Three of those scoring strikes went to the usual targets as Devin Duvernay, Jake Smith and Brennan Eagles all recorded their fourth touchdown catches of the season. Tight end Cade Brewer also got into the end zone for the first time since 2017.

In the third quarter, Texas ran a play that seemed like a normal handoff to Keaontay Ingram. The UT running back, however, quickly flipped the football to Smith, a freshman receiver. Smith, who had run 8 yards on a reverse earlier in the game, gave the football back to Ehlinger, who found an open Brewer for the 25-yard score.

Since Texas ended up winning by six points, Oklahoma State fans will probably wonder about the field goals it passed up in the second half. In the third quarter, Oklahoma State lost yardage on a fourth-and-1 from the Texas 3. The Cowboys later faked a 44-yard field goal but threw incomplete on a fourth-quarter shovel pass to tight end Jelani Woods.

Texas defensive end Malcolm Roach was in the middle of both plays. On the fourth-and-1, Oklahoma State running back Chuba Hubbard ran into a teammate after Roach pushed a lineman backward. Roach was also the nearest Longhorn to the football on the incomplete pass.

The Texas defense has held on four of the five fourth-down attempts it has faced this season.

Oklahoma State trailed 36-23 with four minutes to go when Tom Hutton got off a short 30-yard punt from his 24-yard line. Instead of letting the ball go, UT safety Brandon Jones charged and muffed the catch. Oklahoma State recovered and then pulled within six points on Hubbard’s 13-yard run with 1 minute, 37 seconds remaining.

Oklahoma State punted four times Saturday night, and Texas messed up two of the returns. In the second quarter, Smith flubbed a fair catch. Oklahoma State pounced on the football with 53 seconds left in the half and quickly put together a four-play scoring drive.

Oklahoma State scored only three touchdowns Saturday. Two of those drives were set up by UT’s special teams. After the game, Texas coach Tom Herman said that “the punt return game was embarrassing. We have got to do a better job of coaching those situations.”

Oklahoma State twice had an opportunity to stun the Longhorns in the final 97 seconds. UT reserve defensive back Chris Adimora recovered an onside kick that eluded the Longhorns’ first line of defense. But the Cowboys still had all three of their timeouts, and they burned two as two running plays netted Texas a yard.

Facing a third-and-9 with 1:24 left, Texas put the game in Ehlinger’s hands. He faked a handoff and rolled out to his right. Texas had receivers running routes, but Ehlinger kept the football and gained 29 yards. “Once I knew I had the first and essentially the game was over, it was an incredible feeling,” he said.

Ehlinger’s first down came a year after Oklahoma State had its quarterback finish off Texas with his legs. With 1:37 left in that contest, Cowboy quarterback Taylor Cornelius picked up 8 yards on a third-and-6 attempt. That closed out a 38-35 win for Oklahoma State.

ICYMI: Sam Ehlinger on his 29-yard run that sealed the Texas victory and snapped a 4-year losing streak to Oklahoma State:

"We had that in our arsenal, and to pull it out on the last play showed me that coach had a lot of confidence in me." pic.twitter.com/FZdUyIB4jX