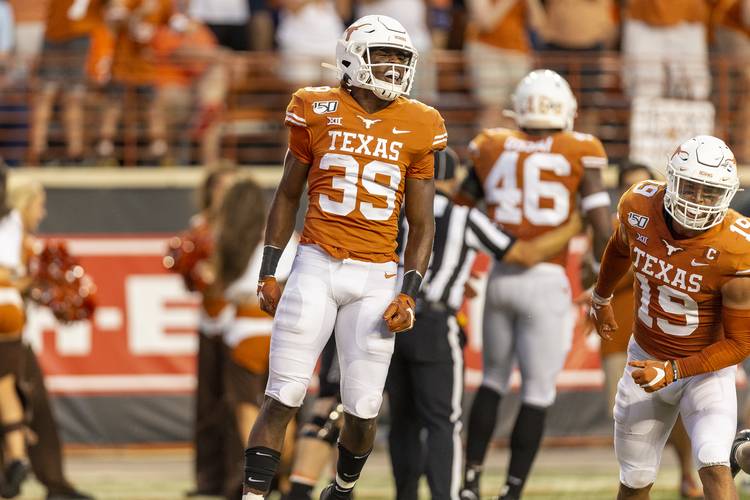 Texas defensive back Montrell Estell (39) celebrates an interception against Oklahoma State at Royal-Memorial Stadium on Sept. 21, 2019. [Stephen Spillman for Statesman]

Texas coach Tom Herman said Green and Sterns would need to be re-evaluated. Thompson will miss “a significant amount of time.”

And the Longhorns already were without B.J. Foster (hamstring) and DeMarvion Overshown (back). Both players missed last week’s rout of Rice, too.

Fortunately for Texas, this coming week is an off week; the Longhorns don’t play again until Oct. 5 at West Virginia.

“We need this bye week in the worst way to hopefully get some guys healthy,” Herman said.

Before the season started, Herman surmised that “We’ve got really six starters at safety.” With the secondary depleted, two new names were added to the mix. Both sophomore Montrell Estell and freshman Chris Adimora had notable moments Saturday night.

Estell made his first-ever start as safety as Texas moved Thompson to cornerback and slid senior safety Brandon Jones to nickel back. Estell was second on the team with nine tackles. His second-quarter interception also set up a touchdown.

Adimora recorded a pass breakup in the fourth quarter. He also recovered a wayward onside kick after Oklahoma State pulled to within six points with 1:37 remaining. Herman said that Adimora had never before taken a live rep with the hands team. Adimora was seen consulting with Jones before the kick.

“I just told him to play his game and the ball is probably going to be kicked to him from what we’ve seen on film and how they do onside kicks,” Jones said. “I told him just to be ready.”

Estell signed with Texas in 2017, but had totaled only five tackles over the first 13 games of his career. Adimora was a four-star signee in 2019. He collected two tackles against both Louisiana Tech and Rice.

Junior safety Chris Brown, who snagged UT’s other interception, wasn’t surprised by Estell and Adimora’s outings. “They showed you guys things,” he said. “I know what they can do, I practice with them every day, I know what they’re made of. … It comes down to waiting your turn and waiting until your name is called and getting that opportunity. When they did, they executed. I’m proud of them.”

Third-and-Duvernay: Quarterback Sam Ehlinger completed 20 passes on Saturday. Twelve of those were caught by Devin Duvernay, who finished with 108 receiving and a touchdown. The 12 catches tied for the fourth-most in school history. Duvernay fell three catches short of Jordan Shipley’s school record, which was set in a 2008 home game against Oklahoma State.

Duvernay was a favorite target of Ehlinger’s on third downs; half of his receptions were on third-down plays. Five of those moved the sticks.

For the night, Texas was 8-for-14 on third-down conversions.

Texcetera: Texas receiver Collin Johnson missed his second straight game with a hamstring injury. Malcolm Epps started in his place and caught one of four targets … Freshman linebacker Marcus Tillman Jr., was diagnosed with a MCL sprain in his knee after he went down on the opening kickoff. … Duvernay, Eagles and Jake Smith each recorded their fourth touchdown catches of the season … Despite leaving early with an injury, Sterns’ 12 tackles still led Texas. … Ehlinger’s 15 touchdown passes to open the season is the best four-game total to start a season in school history. … Duvernay’s 6-yard touchdown catch in the second quarter was his 100th career reception. … Roschon Johnson scored his first career rushing touchdown and Cade Brewer caught his first touchdown since the 2017 season. … Texas honored NCAA champions Tripp Piperi (shot put) and Ashtin Zamzow (heptathlon) at halftime.