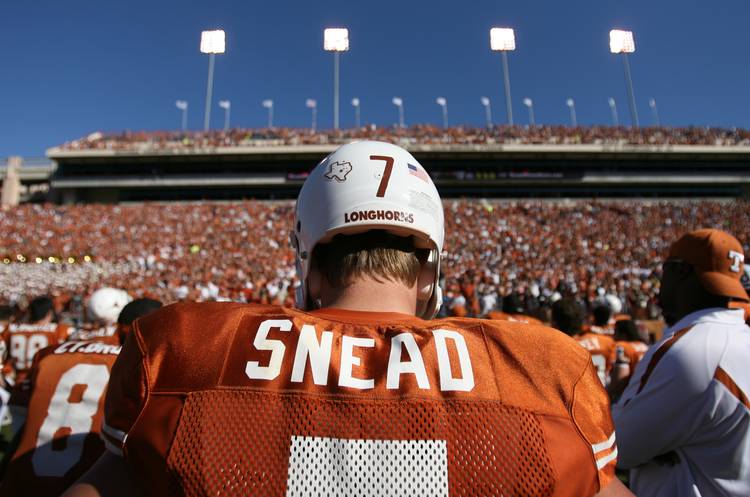 Jevan Snead after the Longhorns' loss to Texas A&M in 2006. [JAY JANNER/AMERICAN-STATESMAN]

STEPHENVILLE — As they grapple with the pain of losing their son and brother, the family of Jevan Snead is asking mourners in his hometown of Stephenville to do one thing to help them say goodbye: Shake their cans.
Before he was a Texas Longhorn, Snead was quarterback for the Stephenville Yellow Jackets and was inducted into the Stephenville High School Athletic Hall of Fame in 2014.
He was found dead Saturday night in Austin at age 32. No cause of death of has been disclosed.
Dubbed the “can fans,” the Yellow Jacket faithful are known for their boisterous shaking of cans to rally their favorite football team.
As the Snead family makes plans to lay Jevan to rest on Sunday, they’ve been remembering what the sound of those cans meant to him — and to them.
“We want to honor the schools he loved, and one of those schools was Stephenville High School,” Jevan’s sister Jennah Walker told the Stephenville Empire-Tribune. “We think it would be awesome if fans would shake their cans as we leave the church. We want them to cheer Jevan on to his final resting place.”

MORE THAN A FOOTBALL STAR

The Sneads are a tight-knit family that includes parents Jaylon and Jane, brother Jayse, sister Jennah and her husband Cody. The Walkers have four children who Walker says adored their uncle.

Advertisement
“He was an amazing uncle. He was quiet, but really funny,” she said. “Jevan loved Christmas and one year my daughter wanted a Christmas-themed birthday so Jevan dressed up as Buddy the Elf. When Santa showed up, he yelled, ‘Santa! I know him!’ The kids loved it.”
Snead was also close to his younger brother Jayse.
“For a long time, he was the typical big brother,” Walker said. “Jayse couldn’t hardly walk by without getting punched in the arm. But as they grew older, they grew extremely close and talked every day.”

Growing up, Snead always dreamed of playing football.
“When he was in grade school, he wrote a paper about what he wanted to do when he grew up,” Walker said. “He wrote that he wanted to play football in college and play in the NFL – and he was able to accomplish that dream. He was blessed with an amazing talent.”
As a high school quarterback, Snead was twice named all-state and all-district. He was a Parade All-American as a senior in 2006.
Snead competed in the U.S. Army All-American Bowl as a senior, throwing for 147 yards and two touchdowns. Rivals.com described him as the nation’s fourth best dual threat as a running and passing quarterback following his senior campaign.
He completed his high school career with a 23-2 record as a starter and accumulated nearly 8,000 total yards and 100 touchdowns over his final two seasons with the Yellow Jackets.
After graduation from high school, Snead played for the Texas Longhorns before transferring to Ole Miss. He later signed with the NFL’s Tampa Bay Buccaneers but was later released.
Snead was living and working in Austin when he died.

The shock of his unexpected death has paralyzed the family with grief, but they are determined to make something good come out of it.
“We have been overwhelmed and amazed by the outreach of people from California to Mississippi,” Walker said. “And this community has been amazing to us. Jevan was loved.”

The family suspects that Snead suffered from Chronic Traumatic Encephalopathy (CTE), a degenerative brain disease caused by repetitive brain trauma that is common in football players.
The family has donated his brain to research.
“That was Jevan’s wish,” Walker said. “He always thought he had CTE because he had so many of the symptoms.”
The family is determined to raise awareness about the disease. Rhyne and Sarah Gailey, friends of the Snead family, have organized a Gofundme account under the name “Jevan Snead Memorial.”
“We love the Snead family and this is one way we can help them get through this terrible time,” Sarah Gailey said. “Rather than sending flowers, we are requesting donations. The funds will be donated to Chronic Traumatic Encephalopathy research and to his beloved hometown’s football program to purchase state-of-the-art helmets to protect future Yellow Jackets from brain injury.”

Snead’s funeral will be at 2 p.m. Sunday at the Erath County Cowboy Church. Visitation will be held from 6-8 p.m. Saturday at the church.

Sara Vanden Berge is managing editor of the Stephenville Empire-Tribune.