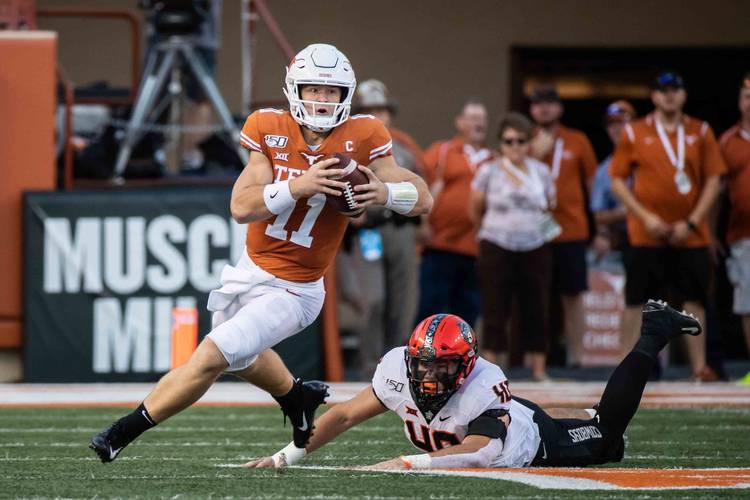 Quarterback Sam Ehlinger (11) escapes from a tackle by Brock Martin (40) during an NCAA football game in Austin, Texas on Saturday, Sept. 21, 2019. [LOLA GOMEZ/AMERICAN-STATESMAN]

Texas coach Tom Herman opened his post-game news conference Saturday night by stating how proud he was for the way the Longhorns had pulled out a 36-30 win over Oklahoma State.

“That was not a very well coached or very well played game in certain spots,” Herman said, “but we found a way to win.”

Herman then gave the injury report, called the two botched punt returns “embarrassing” and spoke about the progress it shows that Texas could win ugly.

He never once mentioned Sam Ehlinger’s name, and reporters never asked, either.

By his own admission, Herman “hasn’t lost a lot of sleep” over all the injuries in the secondary. Neither should Texas fans, really. Why? In the Big 12, if your team has an explosive offense, you’ll have a chance to be competitive every week.

Don’t think so? Just ask Oklahoma fans. The Sooners had the worst defense in the league last season. It was dreadful. OU’s defense ranked 10th out of 10, giving up an average of 453.8 yards per game. But the Sooners also had Kyler Murray, a dynamic athlete who won the Heisman and became the No. 1 overall pick.

As long as Ehlinger stays healthy, the Horns get more from a hard-charging Keaontay Ingram, the receivers find open holes and this stout offensive line stays together, the Horns should be competitive in every game. Yes, even against Jalen Hurts and the Sooners on Oct. 12.

Last year, Texas was the only Power 5 team in the nation without an offensive play of 50 yards or more. So far, the Horns have three this season, including 55- and 73-yard touchdown catches by Brennan Eagles.

Ehlinger has thrown for a Big 12-high 1,237 yards and 15 touchdowns with only one interception. He’s averaging 12.1 yards on every completion. Devin Duvernay, Jake Smith and Eagles each have four touchdown catches.

Now, Ingram must continue to flourish. He ditched the knee brace that bothered him the first three games and had a strong night against Oklahoma State. Ingram and Roschon Johnson make an enticing combo. Daniel Young is healthy again, and Kirk Johnson will likely be back in uniform against West Virginia.

Offensive line coach Herb Hand has assembled another solid group, it would appear. Texas has allowed only seven sacks, five of those coming against LSU. Generally, Ehlinger’s had plenty of time to throw, and there’s likely no other defense remaining that will be as challenging as LSU’s.

Essentially, the defensive injuries look bad, but it’s no reason to cancel the season. Texas has plenty of offensive firepower to offset loss of depth in the secondary. Granted, Herman would prefer a full roster. But like he said, there’s no reason to lose sleep.

On to this week’s mailbag …

Q. Why are plagued by injuries. We looked gassed and dropping like flies. — Mitymouse

Saturday’s game was an awful arrival of massive bad luck, seems to me. Freshman linebacker Marcus Tillman was injured on the opening kickoff when he got rolled up. He’ll be out the rest of the year. Cornerback Jalen Green went low to tackle Chuba Hubbard and separated his shoulder. I’m not sure which play cornerback Josh Thompson broke his foot on, but that’s another blow. Caden Sterns went up for a pass breakup and crashed to the ground, but I’m guessing he was already beaten up by that point.

What’s funny to me is that I saw some people — most likely LSU fans — crowing on social media about Texas was “going down with injuries.” This wasn’t guys sitting down on the field needing to stretch out. These were injuries that forced guys to the locker room.

Q. If everyone is on track health wise and we have no injuries at WVU, what does the defensive backfield look like for OU? — Cole

Based on what we’ve seen thus far, I’d project Brandon Jones, Chris Brown and Montrell Estell at safety. D’Shawn Jamison, Kobe Boyce and Anthony Cook are still at corner. Herman has said these injuries likely open the door for Kenyatta Watson II to get some playing time, too. Frankly, I wouldn’t mind seeing Chris Adimora a little more.

Realistically, that’s plenty of manpower against West Virginia. We can get into whether that’s enough for Oklahoma in another mailbag. Can I reserve the right to see how things go against the Mountaineers first?

Q. Are Foster and Overshown on track to be back for the WVU game? — Michael

Here’s what Herman said Monday about B.J. Foster (hamstring) and DeMarvion Overshown (back) and their injuries. “The West Virginia game is certainly best-case scenario, but I don’t know,” Herman said. “I can’t predict the future two weeks out as far as how they’re going to continue to develop.”

Q. Will Roschon remain at RB or will he go back to 3rd string QB? — Robert

I wondered that exact same question the first few games. At this point, it looks pretty clear that he’s going to finish the year at running back. Based on what I’ve seen, he has to stay at running back, right? Next year, Texas would have Ingram and Young back along with 2020 recruit Bijan Robinson, assuming he does indeed sign with UT.

At quarterback, Ehlinger is likely (should?) return for his senior year. Casey Thompson will have two full seasons under his belt at that point, and Lake Travis’ Hudson Card joins the fold, assuming he signs with UT.

So, I would think Johnson stays at running back. Again, it depends on how the rest of the season shakes out. This much is certain: I believe he’d give the Horns more production as the backup running back than he would the third-string quarterback.

Q. With Roschon excelling at RB, and the 2 transfers in the off-season, any chance UT looks for a junior college QB to add depth? — Adam

OK, now we’re getting to the meat of it. Let’s say Johnson stays at running back. In that scenario, Herman and offensive coordinator Tim Beck have to ask themselves how much they believe in Thompson. How much does he improve in practice this season? Or, how well does he play when he gets into games?

Based on recent offseasons, I have to believe Herman will scour the graduate transfer market as an insurance policy. You must look under every rock for someone who could help. The problem is that most graduate transfers want to come in where they are likely to start immediately. Nobody will come to UT just to knowingly sit behind Ehlinger for their final season.

Q. If Sam continues playing the level he has, and Texas wins out, where does he finish in the Heisman race? — Brian

It’s baffling to me how Ehlinger isn’t really being mentioned in the Heisman talk right now. Is that solely because Texas isn’t in the top 10? Alabama’s Tua Tagovailoa will get Heisman love, and OU’s Hurts will, too, because America loves a good comeback story. If Texas beats West Virginia and Oklahoma and Ehlinger still isn’t in the Heisman talk, Herman should go on the offensive. Let’s be honest here. The Horns aren’t going to beat either of those teams if Ehlinger doesn’t play well. So give it a few more weeks.

Q. I’ve seen bowl projections that put us in the Sugar Bowl against Georgia or LSU. Would they repeat either match up? — Marty

It depends. The Big 12’s bowl contracts say that if the league champion does not make the College Football Playoff, that team is automatically advanced to the Sugar Bowl. So it’s conceivable that LSU or Georgia could be there again to meet the Horns.

The problem is that bowl officials don’t like rematches. Neither do TV executives, really. Texas just played Georgia last season, so the Sugar Bowl people likely don’t want that matchup for a second straight year. Texas just played LSU and will play LSU again next season in Baton Rouge, La. So I can’t imagine that school officials on both sides would want to do that on Jan. 1, either.

In case you are wondering, the Peach and Fiesta Bowls are the two sites for CFP semifinal games this year. The national championship will be in New Orleans, hosted by the Sugar Bowl committee.

For this, I’m turning to our resident expert Mike Craven: “They won’t take many more. The top target left is DE Alfred Collins of Bastrop Cedar Creek. (Collins) would make 20 commits, and Herman says to not expect a full class. If there’s a position to keep watching, it’s wide receiver.”

A quick plug: Make sure you’re keeping with all of Mike’s recruiting coverage on his recruiting page at Hookem.com.

Q. Why do the Big12 refs have to huddle and have a long conversation on every flag — even the obvious false starts or offside calls? These huddles are unnecessary and vastly slow the speed of the game. — Doug

I’m ecstatic to know that I’m not the only one who thinks the officials are slowing the game down. Look, I get it. They want to get the call absolutely right. But at some point, you have to make calls and go with it. There is no need to gather up a quorum on a false start call. OK, maybe that’s me being a little extreme. Thus far, I feel games have been officiated well. The NFL is the league having problems, though.

Q. When do tickets go on sale for the rematch next season Texas at LSU in Baton Rouge? — BWR

That will be determined solely by the LSU ticket office, just like it was decided by the Texas ticket office this year. That game will be sold out, I’m sure. If you want to buy a seat in the UT section, check your standing on the Longhorn Foundation priority points list. If you’re not in the top 100, athletic director Chris Del Conte takes cash, check or charge.

Q. How many point underdogs do you think Texas will be for the Red River Shootout given we have key injuries in the secondary. — Cam

First, let me say that it will be determined by what happens in West Virginia. Should the Horns beat the Mountaineers, I could see Texas opening as a 6-8 point underdog against Oklahoma. I’ve seen some weird lines this month on all sorts of games. You can bet that oddsmakers will set the line somewhere that draws money on both sides.

By the way, Texas gamblers, you enjoying these last two games? The sharps saw their blood pressure spike when Rice scored that late touchdown. Then D’Shawn Jamison saved the backdoor 31.5-point cover with a kickoff return for a touchdown. Then Brandon Jones’ muffed punt opened the door for Oklahoma State to score late last week. I saw Texas was anywhere from six- to seven-point favorites against OSU. The Horns won by six.

The freshman was expected to miss six weeks with a sports hernia surgery. This diagnosis was made after the season opener. Whittington has been on the sideline the last few games, just not in pads. I wouldn’t even think about his return until mid-October.

Update: Herman said after Wednesday’s practice that Whittington could be cleared the week after the West Virginia game. That puts him on track to be available for the second half of the season.

Have a question for the Whys of Texas mailbag? Email bdavis@statesman.com or drop a line on Twitter (@BDavisAAS).