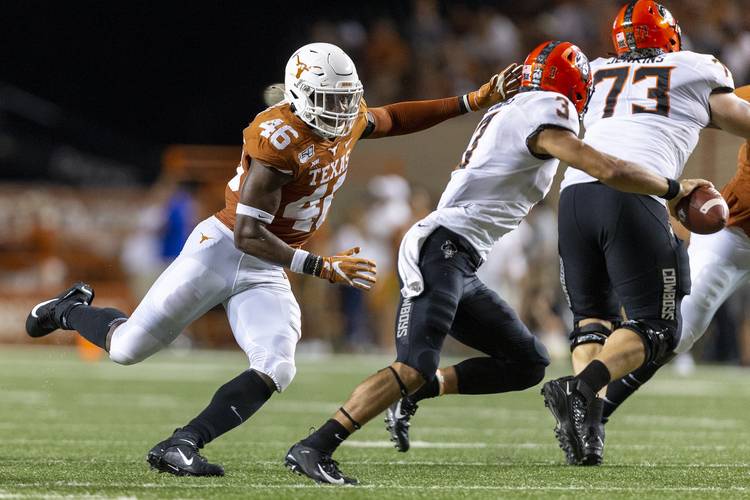 There’s only one proper way to kill a goat.

Where Joseph Ossai grew up in Ijanikin located in Lagos, Nigeria, cooking goat was a unique family bonding experience. In similar fashion, Ossai’s family bought a live goat a few years ago from a stockyard in Huntsville.

His uncles back home normally did the deed. But they’re not here, he said. “And you’ve got to step up.”

You tie three legs together, cover the eyes and ears, take your knife and …

“First time doing it, I was trembling,” Ossai said.

He had that same queasy feeling at the Sugar Bowl. It was the freshman’s second career start but clearly his biggest moment. Realistically, just being on the field — heck, just being in America — was something of a miracle.

Ossai might have been the most athletic soccer player at his school in Nigeria. Instead, his mother was goaded into placing her name into the Diversity Visa Lottery program one night by a friend in 2007. About a year later, the family received life-changing news from the U.S. State Dept. She had won.

“I hate to be a loser, so I don’t like doing it. But my friend kept pushing,” Emmanuela Ossai recalled. The family received eight green cards for permanent U.S. residence, but needed only six. They ended up not using the final two because it was too difficult determining who else should come.

The State Dept. picks 50,000 lottery winners from all over the world each year. In 2017, it was estimated there were 20 million applicants.

“God, He makes everything possible for us,” she said. “It’s God. That’s all I know what to say. This journey is being led by God.”

Emmanuela Ossai still remembers the exact amount of each Delta airline ticket — “$1,708,” she said. The plane first stopped in Dubai. “It was so beautiful. If you go to Dubai, you’ll want to stay,” she said. “The kids had to tell me, ‘Mommy, you’re not going to stay here.’”

The family landed in Houston on Christmas Eve 2009. Lagos is a large, metropolitan city where English is a common language. “It looks like Houston. I’m not joking,” Emmanuela said.

Joseph Ossai was nine years old at the time; he turned 10 in April.

“We stayed at a Motel 6 for two or three days, and we just thought the world of it,” Joseph Ossai said. “Wow, look at this. Air conditioning, fridge, TV, cable, Cartoon Network, wow! Yeah, it was really cool.”

In Nigeria, it’s common for homeowners to build walls around their property, putting gates at the driveway entrance. Ossai said you’d see broken glass on top of walls to discourage anyone from jumping over. In Texas, he couldn’t believe the idea of a subdivision with no walls.

“When you come here, you see houses just out in the open,” Ossai said. “What the heck? Don’t these people need security? There’s no ADT back there.”

In America, his mother and father would no longer struggle to make ends meet. Ossai figures he was 4, maybe 5, when his father Vitus packed for a road trip.

“We were all crying and we’re like, can we go with you?,” he added. “He said, ‘Yeah, just go inside and put on your shoes.’ We all went inside. We were hurrying to put on our shoes. And we looked out the window and he was gone.”

Vitus Ossai went everywhere looking for work over the next few years. He ultimately settled in the United Kingdom and sent money back home. Joseph remembers his dad finally coming back home before the family left for the United States. It was a powerful lesson in doing whatever it took for family.

Once in Texas, the Ossais paid four months up front for housing and electricity, Emmanuela said. Joseph, his older sister Peace and younger brothers Philip and KC were tested and placed into the Houston school district. His youngest brother, Emmanuel, would be born a U.S. citizen.

Ossai laughs about it now, but he had no clue what American football was initially. He thought it was rugby with padding. He remembers learning about the Super Bowl. The Pittsburgh Steelers, winners of Super Bowl XLIII, became his favorite team.

He immediately went to the elementary school principal and asked to join the football team. No luck. Finally in seventh grade, Ossai’s family had moved to the Conroe school district where he found helmets and shoulder pads at Peet Junior High.

“I initially tried out to play receiver, but I wasn’t really coordinated to play receiver,” Ossai said. “I remember making the A team, but just because I was big and tall. The first few days of practice, I was sitting and bored. One day somebody goes down on the defensive line and coach Edwards said, ‘I need somebody to come play D-line.’

“I hate being bored,” he said. “I didn’t even care if he wanted me to play O-line, whatever. I just raised my head, threw my helmet on.”

The coach had one simple instruction. Go get the quarterback. “He goes, ‘Man you’re really good at this. Remind me to put you here again tomorrow.’ That’s how me playing D-line started,” Ossai said.

Ossai stayed at defensive end when he got to Conroe Oak Ridge. “It’s too rough,” Emmanuela Ossai said of football. “He says, ‘Mommy, I like this game.’” Ossai grew into his body, and he would ultimately rank 25th on the American-Statesman’s Fabulous 55 list.

“If you see him on film, you can pick him out real fast,” Ossai’s high school coach Dereck Rush said. “Kind of like the way he’s playing at UT right now, you watch him on the defensive side of the ball, when the whistle blows, he’s still running.”

Ossai was leaning toward Texas A&M but didn’t like the staff shakeup after the coaching change to Jimbo Fisher. Texas coach Tom Herman knew he’d have to make a textbook recruiting pitch, showing Ossai everything UT had to offer. After all, “He didn’t grow up wearing Longhorn pajamas,” Herman said.

Ossai said he made a list of pros and cons for every school. “I remember correctly Texas won by four,” Ossai said.

When Ossai got to campus, he was assigned jersey number 46, known in recent years as the number belonging to Malik Jefferson. Ta’Quon Graham had Ossai’s high school number of 49.

“I think I saw Malik at a social event, and that was just me being a fanboy,” Ossai said. “And I just said some geeky things. I told him, I promise I’m going to make your number look good.”

Ossai and defensive tackle Chris Nelson smashed into Georgia running back Elijah Holyfield on the first play of the Sugar Bowl. All those butterflies, all that anxiety, went away in an instant. Ossai had a team-high eight tackles in the program-defining 28-21 win.

“I just remember being so nervous,” Ossai said, “because I was under the impression that if I was to mess up one play or anything or cause a touchdown, (defensive coordinator Todd) Orlando would pull me out the game and that’d be it.”

Orlando has stressed numerous times this month that younger players need to realize the coaches trust them. Even Herman said Ossai has grown to learn from his makes and move on. “I’ve seen Joe mature immensely in that area,” Herman said.

Texas ex Charles Omenihu, now with the Houston Texans, took Ossai under his wing last season, as did current senior Malcolm Roach. “He wanted to be a baller and didn’t have a young kid mindset,” Omenihu said Friday.

Football can be rough, but Ossai’s mother is coming around. Philip Ossai is now a freshman linebacker at Houston Baptist. All this athleticism comes from Vitus and Emmanuela Ossai’s soccer backgrounds.

“You pray for your children’s team, and you pray for the other team,” Emmanuela said. “What’s most important is their safety. All of them are looking for something to give back to their families. So I pray for them that God should protect them all.”

From Nigeria to Houston and now to the Longhorns, Ossai is convinced he’s here for a reason. Winning the visa lottery, earning a college scholarship? There must be a plan.

“It can’t be a coincidence. I always think I’m meant to be here, you know?” Ossai said. “For all the things that’s happened in my life, for me to get to this point, it can’t a coincidence. There has to be a reason behind it, a process.”

Texas AD Chris Del Conte: ‘Us not playing A&M is not good for college football’

‘We knew from the start that we were winning this game’: Fun returns for Texas in a Saturday sweep