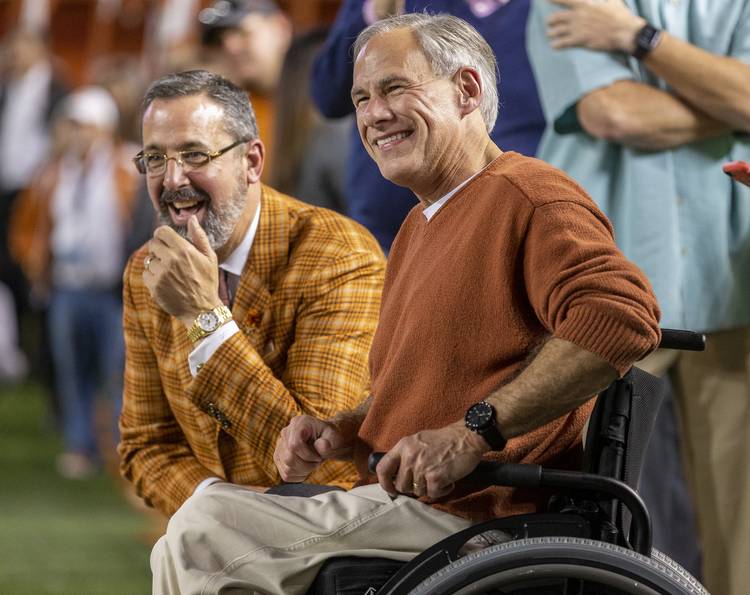 The Aggies still don’t want to hear it.

At a panel discussion hosted by the Texas Tribune, Del Conte appeared on stage alongside new A&M athletic director Ross Bjork. The moderator posed the obvious elephant-in-the-room question to the two athletic directors.

Before either AD could answer, Houston chancellor Renu Khator smartly cut in and said, “I’ll play both of them, by the way.”

“If you look at Nebraska not playing Oklahoma, travesty,” Del Conte said. He then referenced the Backyard Brawl between Pittsburgh and West Virginia, which had been on hiatus. “Us not playing A&M is not good for college football.

“We need to play each other,” Del Conte said. “We had an opening. We asked for an opening at that time. At that time, their schedule was full. We then picked up Alabama, we picked up Ohio State. We’re going to play our next 10 years, we have Alabama, Ohio State, LSU, Michigan, Florida and Georgia.”

Over a year ago, Del Conte revealed he had called then-A&M athletic director Scott Woodward about scheduling a football game. He was told the Aggies’ schedule was full.

Bjork began the panel discussion by reminding those in attendance that Friday was his “82nd day on the job. But who’s counting, right?”

Bjork is already up to speed on state’s biggest political issue. He reminded the audience that it was Texas officials who stopped the series — specifically former UT athletic director DeLoss Dodds — after the Aggies left the Big 12 for the SEC in 2012.

“Chris’s predecessor, (three) predecessors before said, Hey, you know what, we decide when we’ll play A&M,” Bjork said. “They moved on. (The feeling was) so you know what? Forget ’em. And so that’s pretty deep within the A&M family. Hey, there was an offer made, it was declined and so I think now both programs have moved on.”

Other Longhorns want it to happen. At Big 12 media days, football coach Tom Herman said, “I would love to see the rivalry renewed. I think it’s great for college football. It’s great for Texas.”

In July, A&M coach Jimbo Fisher said, “I’m a football coach. I ain’t a politician. If it helps A&M, then we do it. If it doesn’t… you know, we’re in the SEC. I wasn’t here when that divide happened. We’re worried about winning the SEC.”

The truth as to how this all ended has gotten squishy over time.

Lest anyone forget, A&M regents sent chancellor John Sharp to meet with then-UT President Bill Powers about continuing the series after the Aggies joined the SEC. Powers told Sharp that Dodds wouldn’t allow it to happen. Sharp also spoke with the UT chancellor at the time and was rebuffed, an A&M spokesman said Friday.

Texas holds a 76-37-5 record in the all-time series that dates back to 1894. The Longhorns won the final matchup in 2011 on Justin Tucker’s 40-yard field goal as time expired.

“The last time we played, Texas won,” Del Conte said. “I would think they’d want to play us now to avenge that game. That’s not happening, but it should happen. But for some odd reason, that’s above Ross and my pay grade. We’ve had those discussions.

“I’ll hear one thing from one person. I’ll talk to Chancellor Sharp and I’ll get another answer,” Del Conte added. “It’s delicate. The governor tells me, ‘I’m going to do it.’ Okay, my man. Until that time, I’m going than handle my business with University of Texas.”

Bjork was at Ole Miss from March 2012 until this summer when he was hired at A&M. After the panel finished, Bjork spoke about the issue in measured tones. Despite being new, it’s clear he has a commanding grasp on A&M’s position.

“My job as a new person is to ask a lot of questions, listen, learn, evaluate, assess and then you formulate your decision-making,” Bjork said. The Texas issue had been in the news, so Bjork said, “That was one of the first questions you ask.”

“The sentiment that I get is Texas A&M offered to continue and the University of Texas said no. (A&M was told) it’ll be on our terms,” Bjork said.

Del Conte even went so far as to suggest they play on the second Saturday in September in a given season. “Any day, any place, anywhere, he said. “Wherever we’re playing, you can always move the game off your schedule.”

Bjork noted the reality of financial penalties with cancelling games that have already been scheduled.

“It sounds so simple, but we’re scheduled out until 2027,” Bjork said. “He said it, they want to play national championship teams. So that’s their perspective, and we have our perspective.”

‘God has a purpose in me’: Texas’ Joseph Ossai is trusting his path from Nigeria to Austin