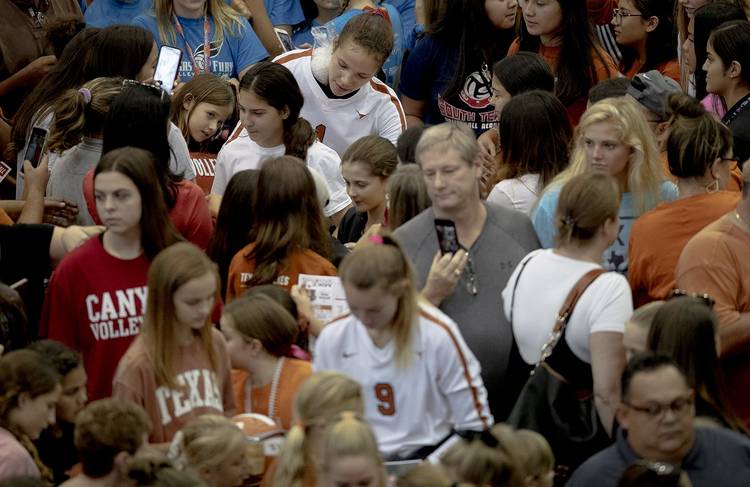 The weekend shift for the Texas Longhorns did not last very long.

Going into the match at Gregory Gym, Texas coach Jerritt Elliott felt that his team had not been playing loose lately. So he challenged the Longhorns to “just have fun playing.” Texas senior Claire Hahn said that request was fulfilled.

“I think we knew from the start that we were winning this game,” said Hahn, whose program was last bested by Texas Tech in 2000. “We just came out, served tough, got on them offensively, defensively. I think they crumbed pretty early, so we were able to just have fun with it and just play with each other.”

Texas (8-2), ranked sixth in the AVCA national poll, did not fall behind on the scoreboard until an ace gave Texas Tech a 2-1 edge in the third set. The first two sets also did not feature a tie. In the opening set, Texas hit .560 and both Skylar Fields and Brionne Butler were perfect on their four attacks.  The second session featured five kills from Logan Eggleston and a .441 hitting percentage for the entire UT offense.

In the third set, Texas faced its only two deficits of the afternoon. Texas Tech (11-5, 1-1) was unable to hold on to those 2-1 and 3-2 advantages, however. Eggleston finished off her afternoon with seven third-set snipes.

“Today it looked like we had a lot more fun,” Elliott said. “Just kind of flowing on all systems.”

“I think the middles were getting set a lot, so it opened up the pins for us,” Fields said. “When we did get set, we were either one-on-one or had a huge split. It was fun.”

Saturday’s match was the first time this season that Texas started all three of its returning all-conference honorees (Butler, Eggleston and White). Butler, a 6-foot-4 middle blocker, had missed the first eight matches with what Texas had called a lower extremity injury. She came off the bench against Iowa State on Wednesday and appeared in parts of two sets.

Eggleston returned to the court after leaving UT’s Wednesday win over Iowa State with a bloodied chin. White’s nose began bleeding just before the start of Saturday’s match, but Texas stalled during its pregame introductions, and the three-time All-American arrived in time for the first serve.

NOTES: Butler played only in Saturday’s opening set. … Sophomore Jhenna Gabriel distributed 34 assists and recorded a career-high three kills. … Texas Tech was led by Emily Hill’s 11 kills, but UT held the senior outside hitter to a .029 hitting percentage. … The only match on the Longhorns’ schedule next week is a Wednesday trip to TCU.

‘God has a purpose in me’: Texas’ Joseph Ossai is trusting his path from Nigeria to Austin