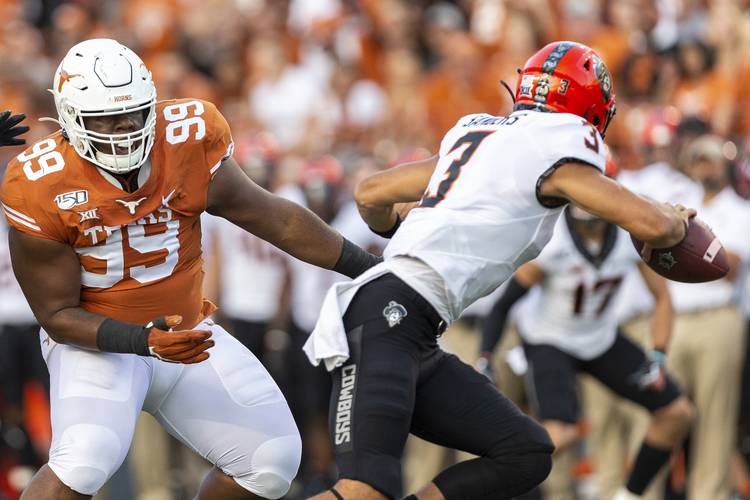 A coach’s son, Malcolm Roach sounds like one, too.

Asked how to stop the run, the Texas senior defensive end said on Tuesday, “Control the line of scrimmage, penetration and make tackles.”

Roach’s protégé is a quick study.

Defensive coordinator Todd Orlando’s bedrock philosophy involves stopping the run. To him, it’s non-negotiable. If any defense can stop the run, the unit is capable of playing winning football.

The Texas secondary won’t be a full strength this month given some key injuries. But the 11th-ranked Longhorns (3-1, 1-0 Big 12) have found their footing up front, thanks to Roach and Coburn.

In mid-September, UT coach Tom Herman scoffed at the idea the defensive line had made no impact in the first two games. “Stats don’t matter for defensive linemen,” Herman said after UT’s 1-1 start. “Do you disrupt the offense? And if the answer is yes, you’re doing your job.”

Roach had a solid start the first two games, but Coburn needed more seasoning. They both had solid performances against Rice, and then jammed up Oklahoma State’s Chuba Hubbard in week four.

Hubbard, the nation’s leading rusher, averaged a season-low 3.3 yards per carry on a career-high 37 attempts against the Horns. Orlando’s troops must’ve done something right. Last Saturday against Kansas State, Hubbard went wild for 296 yards — an average of 11.8 yards per carry.

West Virginia (3-1, 1-0) ranks last in the league in rushing. The Mountaineers are scuffling along, getting just 103.7 yards per game.

Saturday’s game in Morgantown is another chance for UT to polish up any defensive deficiencies before a major challenge against Oklahoma on Oct. 12. The Sooners rank fourth nationally with 293.5 rushing yards per game.

“When I watch (West Virginia) on film, you wouldn’t be able to tell they rank last,” Roach said.

Roach praised WVU senior Kennedy McCoy, who ran for 94 yards last season in an upset win over Texas in Austin. “They have a good running back,” Roach said. “I know he’s good because I played against him numerous times. So I know he’s a tough runner and we have to get ready to wrap him up.”

Few defensive schemes can work without solid play in the middle. Orlando and Roach have been talking up Coburn’s potential since the season began. But he was tentative initially, as you’d expect from a underclassman thrust into a starting role.

Coburn came from Spring Westfield, the same school that produced All-American defensive lineman Ed Oliver. Oliver took Coburn under his wing there, too. He watched as Oliver became a star for the Houston Cougars and even got his own bobblehead as part of a Heisman campaign. “I thought it was cool,” Coburn said.

The main takeaway from all that time with Oliver was that dominant defensive linemen run to the football. And run hard.

Texas defensive line coach Oscar Giles preaches the importance of coming off the ball in explosive fashion. “That’s all they preach every day: Stop the run, come off the ball, be fast,” Coburn said. Be explosive, establish leverage, penetrate the backfield, then as Roach said, get the tackle for loss.

“I really don’t have to make the tackle just to stop the run,” Coburn said. “If I just be effective, I’ll be explosive on the line and dominate, that’s me stopping the run.”

Coburn said it bothered him not to grade out as a “champion” the first two games. He’s earned that designation the last two games from UT coaches with six tackles and a sack.

“I could certainly see a scenario where that guy (Coburn) would be a captain before he left here, and that’s always good. You know, with the previous two years, our nose guard has been a captain. And it’s nice to have some leadership up there.”

Coburn had somewhat of an aw-shucks response to such high praise.

“Leadership to me is pretty much just somebody just being there and doing everything right and I know I could rely on if I need anything,” he said. “So that’s how I feel. I just want to be that type of leader.”