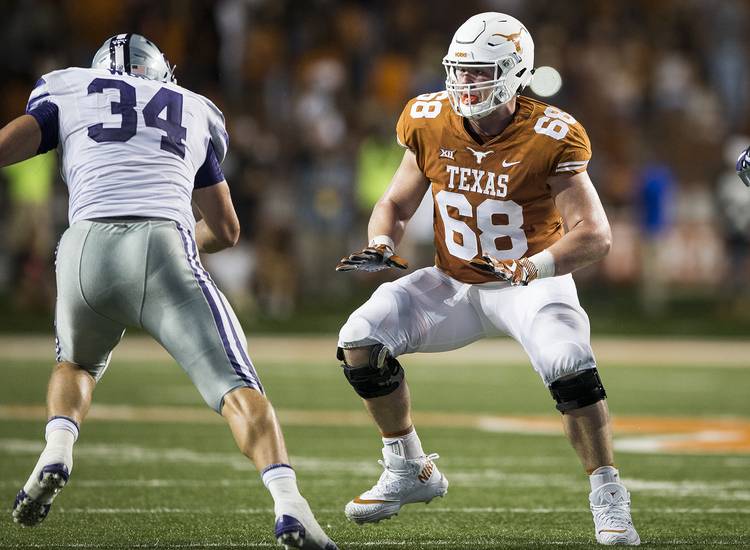 That was by choice, though. The junior swears by the food chain and highly recommends a double serving of rice in your burrito bowl. Fellow lineman Samuel Cosmi said that Kerstetter has even been known to bring his own Chipotle into other restaurants that the linemen are dining at.

“I firmly believe Chipotle is the best restaurant in Austin,” Kerstetter said on Tuesday. “It’s great for you, it’s great (for your) budget and it’s great food.”

As passionate as Kerstetter is about Chipotle, it isn’t his only culinary love. He’s been grilling since high school. That hobby has set up a rivalry within his own home.

During UT’s weekly availability with players, both Kerstetter and senior center Zach Shackelford claimed to be the grill master of the house they share with four other linemen. Shackelford, whose bye-week activity included grilling a bone-in ribeye, is known for his seasoning and preference of charcoal. Kerstetter does a mean marinade and can use a smoker.

Shackelford, Kerstetter and Cosmi are roommates with backup linemen J.P. Urquidez and Reese Moore. Mikey Grandy, who medically retired before the 2018 season, also lives among the Longhorn linemen. When that house hosts the linemen for dinners, Shackelford said the grocery bill can be “pretty pricey.”

Five of the seven sacks allowed by Texas this season came in the LSU game. The Longhorns are averaging 165.5 yards on the ground. In Kerstetter’s eyes, those on-field successes are related to the off-field bonding.

“We’re basically like brothers. We’re like a little family,” Kerstetter said. “It’s been a lot of fun just kind of growing closer and seeing each other more outside of the football bubble.”

Grade corrections: Each week, Texas uses a grading system to determine how its offensive linemen fared. Cosmi, a redshirt sophomore, said he first graded out as a champion during the second game of the 2018 season. At first, he recalled, “it seemed like it was almost nearly impossible to grade out as a champion.” Now Cosmi knows exactly what a championship performance looks like.

In fact, he recently corrected the grading done by assistant coach Herb Hand after the 36-30 win over Oklahoma State on Sept. 21. After receiving an 84 percent — champions must get at least an 85 — Cosmi obsessed over Hand’s scoring of one play. After watching film and concluding that his assignment and technique on that play were correct, he presented his findings to Hand. The coach agreed with the grading and Cosmi was given his fourth championship grade of the season.

“It’s just something about that. I don’t not want to be a champion,” said Cosmi, a 6-7, 300-pound left tackle. “Knowing that I did put the effort but my football ability didn’t let me grade out as a champion, there’s something about that just irritates me in the back of my head. Even being a point shy was irritating me.”

Texas kicker Cameron Dicker on this now famous gif after he made the game winning kick against OU.

“Who were you looking at?”

“I think Joseph Ossai…We like to have fun on the sidelines.”

Adds he didn’t know he was on camera. pic.twitter.com/z8k0jMzlPu

Nods and handshakes: Earlier this month, UT kicker Cameron Dicker revealed the recipient of last year’s viral nod at the Cotton Bowl was teammate Joseph Ossai. On Tuesday, Ossai confirmed Dicker’s story. He added that he also has a handshake that is performed with Dicker and punter Ryan Bujcevski.

Texas coach Tom Herman has a long-running schtick in which he refuses to refer to kickers and punters by their names. So why is the star linebacker hanging out with the specialists?  Ossai, who joined Dicker and Bujcevski in UT’s 2018 recruiting class, said that’s just a reflection of a locker room without cliques.

As for what Ossai first noticed about Dicker? “He has a freakin’ leg on him,” Ossai said.

With its first practice in the books, Texas flips the page on last season’s disappointing finish