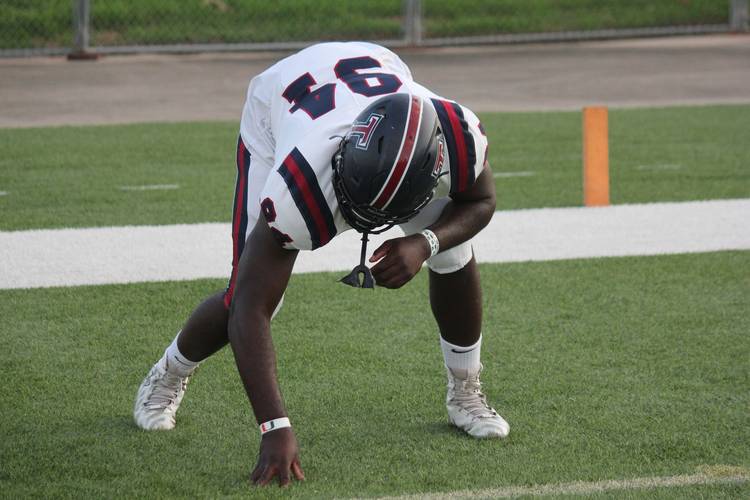 KATY — The most talked about football prospect at Katy Tompkins is junior quarterback Jalen Milroe, a Texas commit for the 2021 cycle. The highest-rated prospect in the program, though, is fellow junior Tunmise Adeleye. The four-star defensive end is the No. 25-ranked player in the 2021 cycle and a top-five player within Texas, per 247Sports’ composite ratings.

“Recruiting is on the back burner during my junior year,” Adeleye said last week after Tompkins’ district-opening win over Katy Seven Lakes. “I want to graduate early, so I’m working on my academics and hoping to help this team achieve our goals. I’m letting the schools recruit and pursue me. The schools that recruit me the hardest are the ones I’ll pay attention to the most.”

The 6-3, 260-pound defensive lineman holds 26 offers and was a first-team all-district selection as a sophomore after recording eight sacks and 56 tackles, including 12 for loss. Tompkins runs a multiple defense, allowing Adeleye to play on the edge of an odd-man front and a four-man defensive line. It’s clear which scheme he prefers.

“As a defensive lineman, I like to play the four-man front because I can play on the edge and rush the passer, but that’s not all I’m looking for,” he said. “Scheme plays a part. Some of the schools I’m leaning towards run the four-man front. It isn’t just about scheme, though. College is about the whole package including academics, the coaching staff and the atmosphere. There’s a lot that goes into this decision.”

Either way, that type of versatility is what put him on the radar of programs like Texas, Alabama and Texas A&M.

“Versatility is a big part of my game,” Adeleye said. “I feel like I can play anywhere on the defensive line and I can take over the game.”

Adeleye has played football with Milroe since they were sixth graders. They aren’t a package deal, but it’s obvious that the Texas commit holds some influence over one of his longtime friends.

“Jalen is in my ear every day about Texas,” Adeleye said. “He plays a big part, but it is my decision and he knows that. I get the final decision.”

Before that decision comes, Adeleye wants to focus on his junior season and the prospect of graduating early as a senior. He also knows there is a bigger target on his back as a junior with major college offers. Last week he was penalized for a personal foul and admitted that he needs to learn from those mistakes.

“It’s hard to balance the aggression with penalties because guys talk some trash about what offers you have and that you’re not good enough to earn those opportunities,” he said. “You just have to remember the game plan and execute. The scoreboard is the final say.”

Tompkins is off to its second straight 5-0 start. A showdown with Katy looms Thursday. Last year was the first time in school history that Tompkins reached the playoffs. Adeleye is now transitioning from young star to experienced leader.

“It’s about encouraging the young guys on the defensive line. I felt what it was like to be a sophomore starter,” he said. “As an older guy and with a bigger platform, I need to set an example for my teammates.”

With its first practice in the books, Texas flips the page on last season’s disappointing finish

Whys of Texas: Del Conte believes ‘We’ve got to define what the new modern amateur athlete is’