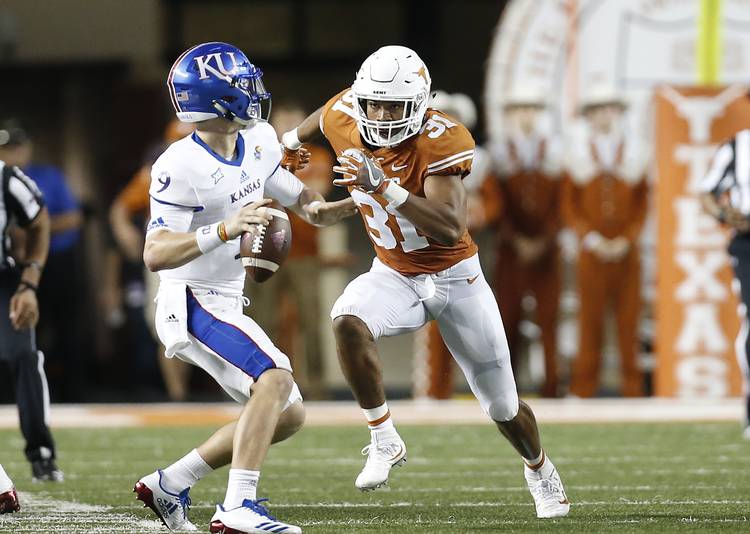 This week’s notable number is 34 — the number that Texas retired in 2000 in honor of Ricky Williams.  Freshman Roschon Johnson signed with Texas as a quarterback, but he’s gotten 34 carries as a converted running back. The 34 touchdowns that Colt McCoy threw during the 2008 season are still a school record.

Thirty-four also represents the number of touchdown passes thrown so far by the next four starting quarterbacks on UT’s schedule.

As Texas prepares for this week’s trip to West Virginia, defensive backs Jalen Green (shoulder), Caden Sterns (knee) and Josh Thompson (foot) are out with injuries. Sophomore safety B.J. Foster returned to practice this week after missing the last two games with an ailing hamstring. DeMarvion Overshown, another safety, has been dealing with a back injury.

Foster and Overshown both could play in Morgantown. Those other defensive backs will not. When he announced Sterns and Green’s injuries on Sept. 23, Texas coach Tom Herman initially said they would miss four weeks. Thompson’s injury was considered more significant.

Sterns and Green have combined for seven starts this season. Thompson has seen playing time at multiple positions. If the Longhorns are without all three players for the entire month of October, can the secondary survive? It probably depends on what you think of the quarterbacks that Texas will face.

Texas plays West Virginia, Oklahoma, Kansas and TCU this month. Here is a look at how those teams’ starting quarterbacks have fared in 2019:

Of those four, Texas has seen Stanley the most. He was the starter for the Jayhawks team that upset the Longhorns in 2016. Stanley didn’t throw a pass against the Longhorns last year, but he had three touchdowns and three interceptions against them in 2017.

Texas has some familiarity with Kendall, too. The North Carolina native spent the past three years at Oklahoma primarily as a backup but he did throw one pass in last year’s game at the Cotton Bowl. With Kyler Murray in the slot and nine seconds left in a 48-45 UT win, Kendall completed a six-yard pass to Marquise Brown.

On Wednesday, Texas defensive coordinator Todd Orlando said some of Kendall’s film from Oklahoma was still worth studying. He gave a positive review of Kendall’s arm. He also noted that while Kendall is averaging only 1.2 yards per carry, he is “sneaky fast” and can run like 2017 Heisman Trophy winner and Longhorns heel Baker Mayfield.

“He’s got something to prove,” Orlando said. “From our standpoint, he’s just in a situation when he was at Oklahoma that he just never got the chance to be the starter. But we’ve seen him so many times and we know how talented he is.”

West Virginia is averaging 218.8 passing yards per game. That ranks 83rd nationally. Of the next four teams on UT’s schedule, only Oklahoma currently has a top-80 passing attack, ranked fourth.

At 314.5 yards per game, Texas owns the Big 12’s worst passing defense. But even with the injuries, Herman said Monday that “we’re pretty confident with the guys that we will be rolling out there this Saturday and for the weeks coming forward.”

Next man up? That cliché is now the rallying cry of the UT defensive backs.

“Just be ready when you number’s called, simple as that,” junior safety Chris Brown said. “It’s football — anything can happen, any given day, any given play. When you’re called upon, make sure you’re ready.”