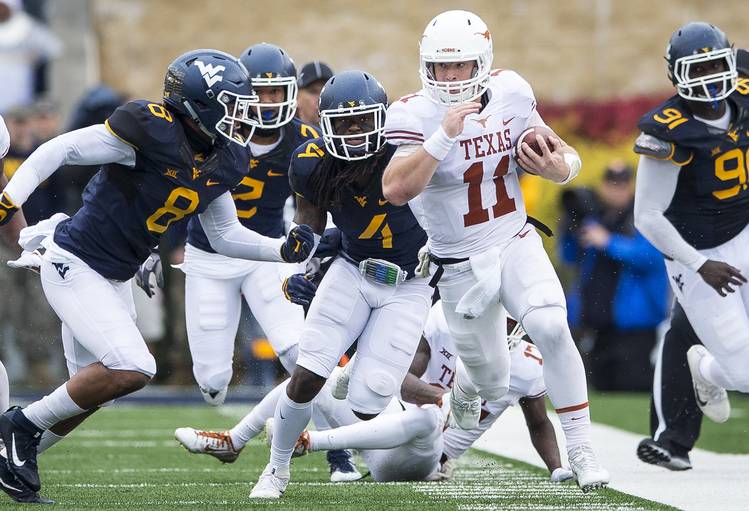 Five key matchups in the Texas-West Virginia game to keep your eye on Saturday afternoon:

This showdown between Ehlinger and Kendall was originally scheduled for the Cotton Bowl, but Kendall transferred to West Virginia after Oklahoma chose Alabama grad transfer Jalen Hurts. Ehlinger has improved on a solid sophomore season, and his 1,237 passing yards has him on a pace to smash UT’s single-season record. Ehlinger also has 15 touchdown passes and only one interception. Kendall has six touchdowns and three interceptions in his new offense. He has completed 65.3 percent of his passes for a West Virginia team that is averaging 25 points per game.

Longhorn linemen vs. the Stills brothers

This week, Texas tackle Derek Kerstetter said the players on UT’s offensive line were “We’re basically like brothers.” In Morgantown, those linemen will be tasked with blocking an actually set of brothers. Defensive linemen Dante and Darius Stills, whose father was an all-Big East linebacker at West Virginia, have accounted for seven of the Mountaineers’ 11 sacks. Texas has started the same combination on its offensive line in each of its four games, and that quintet has mostly kept opposing defenders off of Ehlinger. LSU, however, did record five sacks in its 45-38 victory over the Longhorns on Sept. 7.

Over the past three seasons, Roach has tackled McKoy six times in the games between Texas and West Virginia. Said Roach of his fellow senior: “They have a good running back. I know he’s good because I played against him numerous times. So I know he’s a tough runner and we have to get ready to wrap him up.” The six-foot, 204-pound McKoy is averaging 3.6 yards over his 51 carries against the Longhorns. He also scored twice in a 24-20 win at Royal-Memorial Stadium in 2016. Roach has recorded 10 tackles in those Texas-WVU battles, and four of his stops were recorded behind the line of scrimmage.

Since its top four pass catchers left for the NFL, West Virginia has retained only 11 of the 28 receptions and 118 of the 346 receiving yards from last year’s win in Austin (McKoy had three of those catches and 55 of the yards). Texas graduated three starting defensive backs during the off-season while the current class of students at DBU is dinged up. If you’re looking for fresh faces to stand out in this crowd, perhaps Boyce and James are your guys. A redshirt freshman, James has 26 catches and 263 receiving yards this year. Boyce has struggled this year in coverage, but his five career starts make him the most-experienced among the available cornerback candidates.

Texas outside of Texas vs. West Virginia’s home-field advantage

This will be first true test on the road for a Texas team that blew out Rice in Houston on Sept. 14. Under Tom Herman, the Longhorns are 5-3 when they leave the state of Texas.  None of the losses have been by more than five points and one of those victories came against Georgia in the Louisiana-based Sugar Bowl. Another one those wins was a 28-14 triumph at West Virginia in 2017. Since that loss to the Longhorns, West Virginia has won seven of its eight games at Milan Puskar Stadium. The Mountaineers have beaten FCS powerhouse James Madison and a 3-2 North Carolina State team at home in 2019.