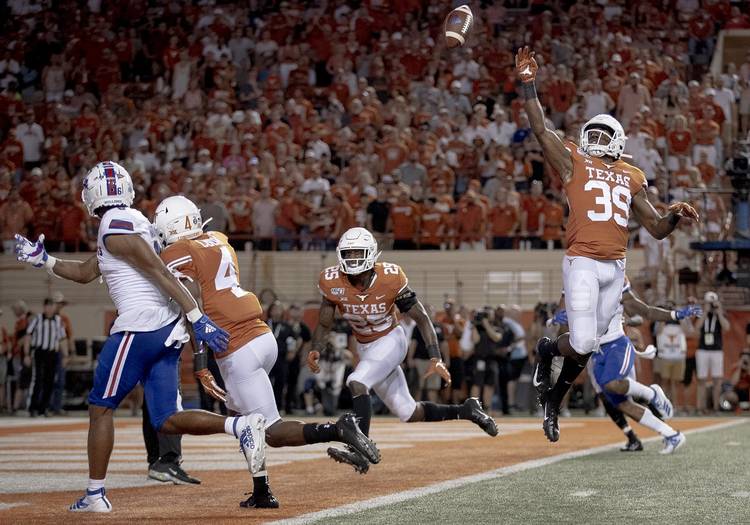 Using logical rationale, the 11th-ranked Longhorns should be in full freak-out mode.

The statistics say Texas has the worst pass defense in the Big 12. The Horns are allowing 314.5 yards per game. Opposing quarterbacks are completing a league-high 65.1% of their throws against this unit.

Oh, it gets worse. Two starters, cornerback Jalen Green and safety Caden Sterns, are out for several weeks with injuries.

“I gotta be honest with you. I haven’t lost a lot of sleep over it,” UT coach Tom Herman said before the bye week. “We trust the guys behind them.”

Defensive coordinator Todd Orlando had similar feelings after two days of practice this week. “I just feel like mentally we’re in a good place right now,” he said.

The calm is partly due to the opponent. The Horns are double-digit favorites, even though it’s the longest road trip of the season and the first of any consequence. It’s unclear if Texas coaches will remain such cool customers next week with No. 6 Oklahoma on deck.

For now, Orlando said he expects cornerbacks coach Jason Washington to give four athletes playing time against the Mountaineers.

Sophomores Kobe Boyce and Anthony Cook were listed as the starters on UT’s depth chart distributed Monday. Sophomore D’Shawn Jamison was listed as the backup at both positions. Freshman Kenyatta Watson II is also gaining momentum behind the scenes, and junior Donovan Duvernay has played in three games this season.

“Every day with Jason and myself, there’s some good, there’s some bad, there’s some in between,” Orlando said. “It’s a process as we move forward, but I’ve been impressed with the way that they’re competing to get playing time.”

“Next guy up,” linebacker Joseph Ossai said. “We’ve always said it and we preach it to them every day. You know, on the sidelines, you’re sitting there and you see some of these guys talking and you get on him a little bit. Focus up. Competitive focus, because you never know.”

At safety, Sterns is the team’s leading tackler. The sophomore suffered a sprained knee injury when he crashed to the ground trying to break up a pass against Oklahoma State. He made a team-high 12 tackles that night but was expected to miss four weeks.

Junior Chris Brown has started all season long; he’s expected to start again Saturday. Brown didn’t get much attention during the preseason but he’s got 18 tackles, one interception and two pass breakups.

Graybeard safety Brandon Jones may go back to his normal safety position now that starting nickel back B.J. Foster has been cleared to return. Foster has missed the last two games with a hamstring injury. Jones shifted to nickel in Foster’s absence.

“We’ve got Chris Brown, we’ve got Brandon Jones,” Herman said Monday. “Both those guys were, in the first four weeks, definitely our two biggest playmakers.”

Backup safety Montrell Estell made quite the splash against Oklahoma State. He had seven tackles and a 37-yard interception return. The sophomore is another one who’s been bubbling under the surface, according to several teammates.

“Well, we know what they’re capable of,” team captain Malcolm Roach said. “We see them every day. It might surprise you guys seeing Montrell catching interceptions in the game and get big pass breakups in the game. But we see him do that all the time in practice.”

The Longhorns will probably take their chances on the back end given their confidence in the defensive front.

Texas has the fourth-best run defense in the league. Defensive players walked a little taller this week knowing they held OSU’s Chuba Hubbard, the nation’s leading rusher, to 121 yards on 37 carries in their 36-30 win two weeks ago. That was an average of 3.3 yards per carry. Hubbard went wild last Saturday against Kansas State, getting a career-high 296 yards.

If Herman isn’t losing sleep, maybe Texas fans shouldn’t, either. After all, the Horns still have a healthy Sam Ehlinger, Devin Duvernay and a strong offensive line.

The last time Texas went to West Virginia, in 2017, Herman started Shane Buechele at quarterback but UT got off to a slow start. He switched to Ehlinger for the team’s third possession. To start the second quarter, Ehlinger led a touchdown drive with some hard-nosed runs and a 4-yard touchdown pass to Kendall Moore.

Ehlinger finished the day with 68 rushing yards and threw two touchdowns in a 28-14 win. It was the last piece of evidence anyone needed to see that Ehlinger was UT’s quarterback of the future. He’s a completely different quarterback now.

Herman did give West Virginia its proper respect this week. The Mountaineers are led by quarterback Austin Kendall, a transfer from Oklahoma. “Anytime you get your team playing hard and … have a sound scheme that can cause some confusion for your opponent, you’ve got a chance for success,” Herman said.

But make no mistake. This week is all about Texas and shoring up defensive confidence with the Red River Showdown dead ahead. No reason to worry about the secondary injuries or the typically wild scene at Milan Puskar Stadium, either.

“They can do all the talking they want to,” Roach said of West Virginia’s rabid fans. “They’re not going to be on that field playing, going through what we going through.”