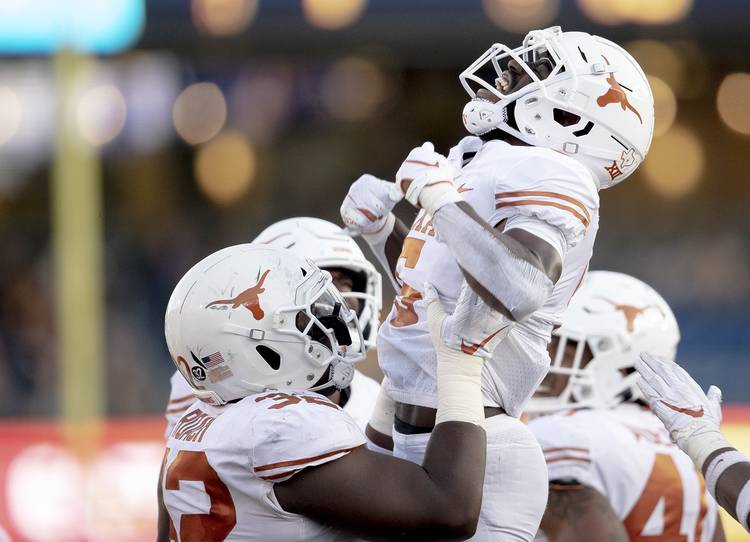 Mountaineers fans showed up Saturday wearing all kinds of anti-Texas shirts featuring UT’s official logo. When it comes to UT’s trademarks, the Longhorns gladly accept cash, check or charge. Go ahead, WVU fans, buy all the shirts you want.

Meanwhile, it’s time for Texas fans to double down on their emotional investment in the 11th-ranked Longhorns after a 42-31 win at Milan Puskar Stadium. Texas’ true rival, Oklahoma, wants your best shot next week in the Cotton Bowl.

“When you play teams 60, 70, 100 times, to me, that defines a rivalry,” Texas coach Tom Herman said. “We don’t play any less hard against West Virginia than we do anybody else on our schedule.”

Herman said in terms of historical significance, “Obviously the team we play next week is, by and large, our biggest rival.”

The Texas fans in the sellout crowd of 62,069 would probably agree. Or at least the ones hanging over the stadium wall afterward shouting, “Beat OU!”

It was a joyous release after Texas (4-1, 2-0 Big 12) scuffled around for three quarters before finally getting down to business. There were way too many penalties and silly mistakes, like when quarterback Sam Ehlinger got greedy and threw a deep ball into triple coverage for an interception.

But come the fourth quarter, Texas looked like, well, Texas. B.J. Foster broke up a pass and made an interception while falling on his back. Three plays later, Devin Duvernay lined up in the backfield, took a handoff and danced into the end zone from 13 yards out.

UT’s third-down machine, Duvernay had six catches for 86 yards. He made three catches on third-and-long on UT’s opening possession (16, 10 and 10 yards) that were each impressive in their own right. But his ballet act out of the backfield will have OU coaches scrutinizing the video this week.

“I feel like as a receiver, you’re always a runner,” Duvernay said. “You’re a running back too when you’re a receiver because when you catch the ball, you’ve got to turn into running back mode. It didn’t really feel any different.”

On WVU’s next possession, D’Shawn Jamison correctly read the play and made another interception, his second of the day. It was UT’s fourth interception overall. Time for the knockout punch, and some trickery. Ehlinger threw a backward pass to 6-7, 300-pound left tackle Samuel Cosmi, who rumbled 12 yards for the game-clinching score.

“We actually call it ‘Moses,’ in honor of Sam’s O-line coach in high school, who he’s really close with,” Herman said. “Sam’s a pretty athletic dude to be able to run that thing in.”

Just like that, it was over, or so it appeared. WVU students started clearing out with 8 minutes left in the game. Technically, it was a backward pass, so Cosmi’s play was a running score. Still, one target, one touchdown.

“This is my one play of glory right here. Not a lot of offensive lineman can say this,” Cosmi said. “I’m very excited. Some of the guys in there, the O-lineman, they’re happy but jealous.”

After four interceptions and an 18-point lead, it should have been over. West Virginia’s Austin Kendall threw a 19-yard touchdown pass to T.J. Simmons. Texas got the ball back, and Ehlinger put it away. He ran straight up the gut for a 23-yard score.

“I’m just really proud of the way that everyone kind of kept our head down and kept swinging,” Ehlinger said.

That was it, right? Well, WVU scored again. This time, Kendall found Bryce Wheaton for a 12-yard touchdown. Fortunately, Texas recovered a shallow kick into no-man’s land, and the Horns took over with 17 seconds left. This time, it was over.

West Virginia (3-2, 1-1) finished with 463 total yards, which won’t make some feel good about the Texas defense. But the Mountaineers had only 96 rushing yards, and it’s hard to quibble with four picks.

The Horns controlled this on the ground. Keaontay Ingram had only 11 carries and missed some time in the first half when trainers took him to the locker room. It was time for backup Roschon Johnson, the freshman quarterback who has switched to running back this season, to carry a necessary heavy load.

“I knew after Keaontay went out, I had to step up,” Johnson said in his first interview this season. He properly thanked his offensive line for paving the way. Johnson had 121 yards on 21 carries. Third-stringer Daniel Young did not get a carry but did play on special teams.

“There is a difference between running as a quarterback and as a running back,” Johnson said. “But I mean, I’ve been playing offense my whole life. So really just I just let my instincts take over a lot of times.”

Redshirt freshman linebacker Ayodele Adeoye made his first career interception. His was easy compared to Jamison’s first career pick, a one-armed snag that’s sure to make all the highlight shows.

“With confidence, you’ve just got to know what you’re doing,” Jamison said. “If you don’t have confidence, then you won’t make plays, you won’t do anything.”

One scoring drive was inundated with seldom-seen understudies like freshmen Marcus Washington and Jared Wiley. Fifth-year senior Kirk Johnson even got out there and had four carries for 15 yards.

It wasn’t perfect, but it was a road victory. “I think any Big 12 win is good, especially on the road,” UT safety Brandon Jones said.

Especially one against your “rival.”