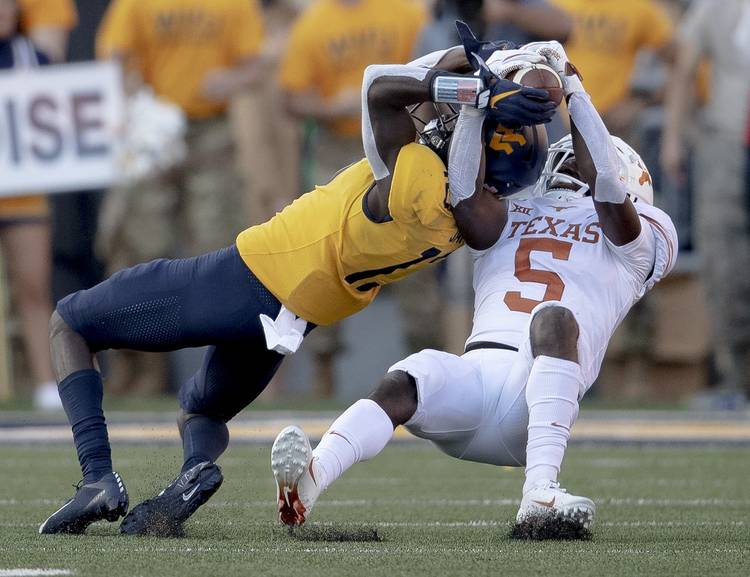 MORGANTOWN, W. Va. — There’s a first time for everything. And for the Texas defense, that cliché applies to interceptions.

Both D’Shawn Jamison and Ayodele Adeoye had personal footnotes in the Longhorns’ 42-31 win at West Virginia on Saturday. In the first quarter, Adeoye’s first career interception set up the first touchdown of Texas’ afternoon. And Jamison got the best of West Virginia quarterback Austin Kendall twice in the second half.

Adeoye dropped back into coverage and stepped in front of a Kendall pass. He returned the ball to the Texas 27. Two plays later, quarterback Sam Ehlinger tied the game with a 22-yard toss to Malcolm Epps.

On his first career interception, Jamison showcased his athleticism. West Virginia receiver Sam James had a step on him, but the leaping cornerback was able to wrestle away the ball. A sophomore who spent last season on offense, Jamison intercepted another pass in the fourth quarter.

Recording that first career interception has become a trend on a defense that has lost eight starters. Seven Longhorns have combined for nine picks this season. Of those, only Chris Brown and B.J. Foster had picked off a pass before this year.

Foster intercepted a pass in the fourth quarter. The four interceptions  were UT’s most since a 2014 game against Kansas. The offense turned three of those turnovers into touchdown drives.

Moving up: Ehlinger moved past Colt McCoy and tied James Brown in the school record books on Saturday. His 13-yard touchdown pass to John Burt was the 53rd of his career, which tied Brown (1994-97) for fourth place. And with a 23-yard rushing score in the final quarter, Ehlinger passed McCoy for career quarterback rushing scores.

Next up for Ehlinger? Chris Simms, who threw 58 touchdowns from 1999-2002. McCoy’s 112 touchdown tosses are still the gold standard at Texas. Major Applewhite ranks second with 60.

One Johnson returns: Texas announced before the game that Collin Johnson was available in emergency situations, but the Longhorns played it safe with their senior receiver. Johnson has now missed three games with a hamstring injury. During warmups, Johnson caught a few passes and did agility drills in front of UT strength and conditioning coach Yancy McKnight. He spent the afternoon on the sideline, however.

For the third straight week, Epps started in Johnson’s place. One of the redshirt freshman’s three receptions was the first touchdown catch of his career.

While Collin Johnson did not play, the family was still represented. Senior running back Kirk Johnson rushed four times for 15 yards.

Johnson has been plagued by knee and hamstring injuries during his five years at Texas. The start to his 2019 season was also delayed by an issue with his shoulder. A 6-yard carry in the second quarter was his first offensive touch since 2015.

This offseason, Collin Johnson said the opportunity to get both he and his brother on the field at the same time was a factor in his decision to not enter the NFL draft. Last year, Kirk Johnson appeared in 10 games but was just used on special teams.